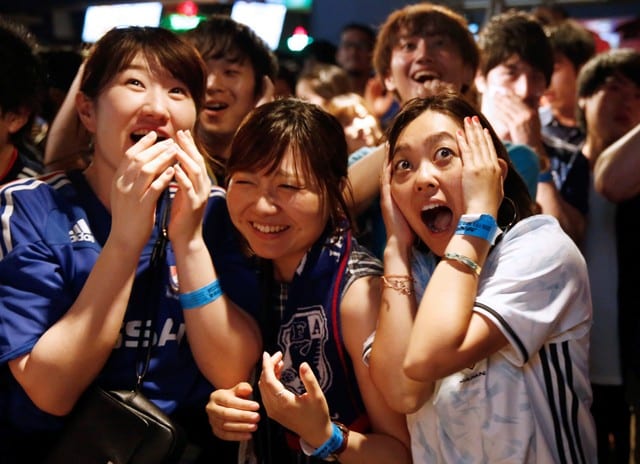 The jeers that rained down on Japan during their 1-0 defeat by Poland in Volgograd may suggest otherwise, but the Samurai Blue’s unedifying decision to wind down the clock and forgo the push for an equaliser had ‘fair play’ at its heart.

The defeat left Japan on the same points, goals and goal difference as Senegal, who were also 1-0 losers on Wednesday to Colombia in Samara, but it was Akira Nishino’s side that snuck into the last 16 at the expense of the Africans.

With Poland already eliminated and Colombia booking their ticket with the defeat of Senegal, it came down to a technicality to decide the runners-up in the group.

With Japan and Senegal having drawn 2-2, the sides were split in a World Cup first by FIFA’s new tie-breaking ‘fair play’ regulation, which compared the sides’ disciplinary records across their three group matches.

Under the system, a yellow card counts as minus one point, while an indirect red is minus three. A direct red card would cost four points.

With two fewer yellow cards, Japan’s tally of minus-four points was two better than Senegal, who may feel aggrieved at being sent home for a reason other than the quality of their football.

Japan, of course, will be toasting the system, and they were more than happy to exploit it on field after learning of Yerry Mina’s second-half winner for Colombia in the Senegal match, which set up the ‘fair play’ tiebreaker.

All thoughts of pushing for an equaliser were banished, and the booing from the Volgograd terraces became increasingly vociferous as Japan hogged the ball at the back in a match that descended into a lifeless training drill.

Nishino murmured his regrets in the post-match media conference about the manner of Japan’s progression, but he is unlikely to be beating himself up about it too much.

After a win over 10-man Colombia and the draw against Senegal, Japan had done just enough to become the only Asian side in the knockout rounds.

“I decided that I was going to rely on the other match’s result,” he told reporters.

“We were not happy about the situation of course. It was not intentional.

“It was not our intention to stay trailing in the match and rely on the other match’s result.

“However, it was a very tough and risky situation.”

Cisse said it was “sad” and a “shame” for Senegal to go out in such a way, and conceded that maybe his players had been too committed in their tackling.

But he said he could not really have instructed them to avoid drawing yellow cards.

“We haven’t qualified because of fair play,” he said.

“Senegal has not qualified because we don’t deserve it.”