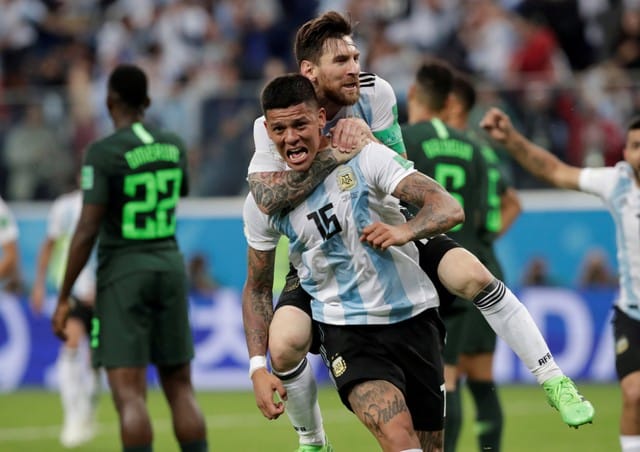 Players like Marcos Rojo, whose dramatic 86th minute volley against Nigeria kept Argentina's hopes alive, have scored many more vital late goals in the group matches than at the same stage of the previous two World Cups

If you like late goals that turn soccer matches on their head, this is the World Cup for you.

Players like Marcos Rojo, whose dramatic 86th minute volley against Nigeria kept Argentina’s hopes alive, have scored many more vital late goals in the group matches than at the same stage of the previous two World Cups.

The thrilling finales have included the one that saw the shock exit of champions Germany on Wednesday.

As the first stage of the World Cup closed on Thursday, figures show how consequential much of the late action has been.

In the group matches, 26 goals were scored after the 80th minute, of which 13 – or 50 per cent – have been winners or equalisers, according to an analysis by Reuters of data provided by sports data firm Opta.

The total does not include other late goals which added to the drama of games but did not change their outcome, such as the second of Brazil’s stoppage time goals against Costa Rica or South Korea’s second goal against Germany in the dying seconds.

By comparison, during the group stage of the World Cup in Brazil in 2014, 26 goals were also scored after the 80th minute but only eight — or 31 percent — were decisive.

“There are so many late goals being scored that you need some luck as well,” Germany’s Marco Reus said after his team’s win over Sweden in Group F on June 23, which was clinched by a Toni Kroos strike just seconds before the final whistle.

While Germany were stunningly knocked out a few days later, after the nerve-wrecking climax of their game against modest South Korea, the late goal drama has mostly favoured the bigger teams competing in Russia.

Harry Kane scored in injury time to secure England’s 2-1 over Tunisia in their first match of the tournament while Uruguay left it late to beat Egypt with an 89th-minute goal from Jose Gimenez.

But the underdogs have had their fun too. Iran slotted home a penalty in the 93rd minute of their match against Portugal which ended 1-1 and Morocco went ahead against Spain in the 81st minute, only for the Spaniards to level in stoppage time.

The profusion of so many late and important goals in Russia seems to be connected with the introduction of the Video Assistant Referee system.

Alex Olshansky, an independent soccer analyst based in New York, said matches were tending to run a bit longer because of the use of VAR during games, adding to the amount of stoppage time being played and increasing the chances of late goals.

“Defenders also get tired,” he said. “It’s easy for us to watch on our couches and not realise that these guys have just run six miles over the last two hours. Sometimes, teams lose their shape towards the very end.”

World Cup: Always look on the light side – Part 2