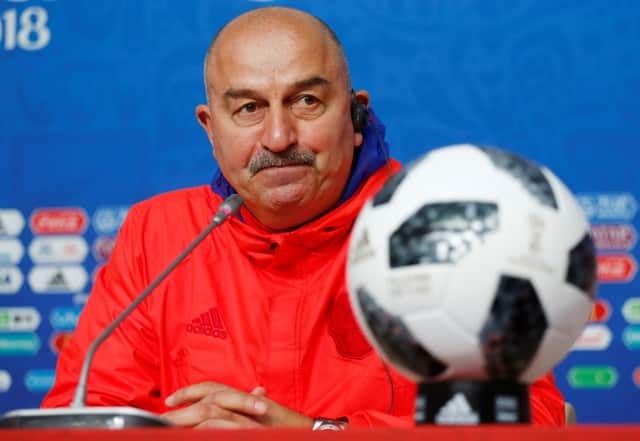 Russia manager Stanislav Cherchesov has brought joy to the hosts, who have qualified for the last 16

Former England manager Graham Taylor to a linesman: “I was just saying to your colleague, the referee has got me the sack, thank him ever so much for that, won’t you?”

What other job could offer you a shorter shelf life than a carton of fresh milk? Who would want to be a manager (apart from for the money) on a month to month existence and at the mercy of the press?

As they say you are only as good as your next result and when you start down the slippery slope of losing the momentum builds scarily quickly into a tidal wave.

When the media become doubters and directors give you a vote of confidence you know you already have one foot in the management graveyard.

Russia manager Stanislav Cherchesov came into the World Cup burdened with the weight of expectancy of a mighty nation and drowning in a tonne of s**t after a very poor sequence of results.

Then he must have had a (big) bird s**t on him on the way to the stadium (a lucky Russian custom tradition) before the first World Cup match, as two games and two wins later he has brought joy to the hosts and is a national hero. It’s a funny old game. Well done, Stan is the man!

After a series of calamitous selections and bewildering substitutions Argentina manager Jorge Sampaoli at least changed the style and colour of his clothes for the game against Nigeria, maybe that will be his major contribution to the World Cup. The sack is rumoured to be imminent for him.

At the World Cup in 2014 France manager Didier Deschamps was building a fresh young team playing exciting football with crisp sharp passing and movement and the goals were flying in but four years later they look to be disjointed and in disarray. What went wrong? For Didier it doesn’t look like if but when he will be sacked with Zinedine Zidane and Arsene Wenger waiting in the wings.

Joachim Low appears to have blown his ‘cushy number’ as Germany manager. Accusations that he couldn’t pick his nose are unfounded as he demonstrated with a pick and chew for the cameras. Picking the team was a different matter with several bizarre selections leaving Germany looking like a very blunt object and games of ‘pocket billiards’ seemed to have distracted his match viewing.

And finally in 2018 Gareth Southgate, who looks like he has stepped out of his tailor’s without the jacket of his three-piece suit, is the 18th England manager since Alf Ramsey. After Middlesbrough were relegated and Gareth was sacked, he then followed Stuart ‘psycho’ Pearce to the ‘failed managers club’, The FA.

When the England manager vacancy came up he declared no interest in the job and it is alleged The FA had stated they wanted to make a big name signing but instead ended up with Big Sam Allardyce who lasted one game before being quickly caught out by undercover reporters. Southgate took up the post in a temporary capacity before impressing and being confirmed as manager.

Gareth has proved to be unconventional but meticulous in his approach, more manufactured than natural. He faces the biggest test of his managerial career as his England team enters the knock-out phase of the World Cup with the UK press already worked up into a frenzy of expectation of 1966 heroics and hope.

He has already achieved more than Frank De Boer at Crystal Palace or Gary Neville at Valencia but can he and his reputation survive intact after the next few games at the World Cup?

It is a brutal business not for the faint-hearted, where only one thing is ever certain …..the sack!