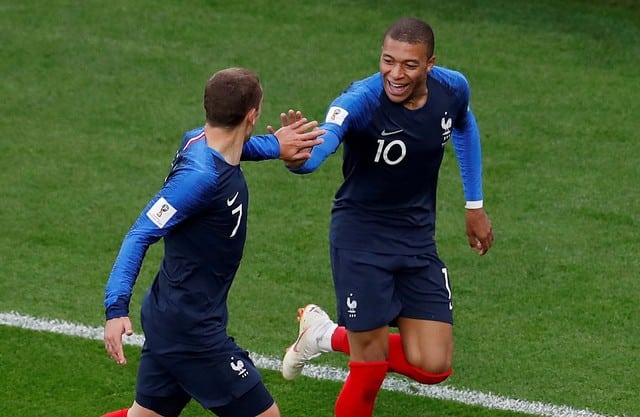 After playing the most soporific game of the World Cup so far, France will feature in a seismic last-16 clash of former champions with a resurgent Argentina on Saturday, and they will have to drastically improve if they are to stop Lionel Messi.

Some fans jeered and others probably dozed off when Les Bleus drew 0-0 with Denmark to finish top of Group C while Argentina thrilled their fans with Messi scoring a superb goal as his team scraped into the knockout phase by beating Nigeria.

Jorge Sampaoli’s side may have disappointed, but they showed more in one game than France in three, scoring only two goals in open play.

But Les Bleus insist they will be ready just on time for Saturday’s game after a tailor-made physical preparation, with talismanic striker Antoine Griezmann expected to finally shine.

In 2006, France huffed and puffed into the knockout rounds, where they beat Spain, Brazil and Portugal en route to the final.

A similar pattern applied to Argentina in 1978, when they won the World Cup after losing to Italy in the group phase.

“Lots of teams who went on to be champions started poorly and then recovered and moved on,” Daniel Bertoni, who scored against the Netherlands in the final that year, told Reuters.

It might then be a matter of who reaches its best first between France and Argentina, and Griezmann is confident he will impress.

“At Euro 2016, I struggled during the group stage and I peaked for the knockout phase,” he said.

With an impressive arsenal of attacking weapons with Kylian Mbappe, Griezmann, Ousmane Dembele, Nabil Fekir and Olivier Giroud, Les Bleus, on paper, can strike at any time even if only Griezmann — a penalty — and Mbappe have scored so far.

They will bank on Argentina’s defensive struggles after the South Americans conceded five goals in three matches, notably losing 3-0 to Croatia.

Defensive midfielder Javier Mascherano has not looked at his best and Argentina’s full backs could struggle to handle the speed of Mbappe and Dembele, should the Barcelona forward start on Saturday.

The French defence has not conceded a goal in open play in the tournament for the first time since 1998, the year of their only World Cup title, but the threat level will reach its maximum as Messi, 31, will be like a fox in the hen-house.

His club team mate Samuel Umtiti, however, believes that Argentina’s talisman is different from the player he is for Barcelona.

“He is different with Argentina than with Barcelona,” said Umtiti. “He does not have the same players with him and their way of playing is different but he has saved them on several occasions.

Remarkably, Gonzalo Higuain has not scored in his last eight matches for Argentina.

Another aspect of the game will be France’s capacity to prevent Messi from being fed by the opposing midfield, notably Ever Banega.

That should be the task of N’Golo Kante, who has been impressive so far, and Paul Pogba, who must show he has the steel to become the next great France player.

Cyprus at top of scale in quest to eliminate human trafficking

A quartet takes on a new kind of music