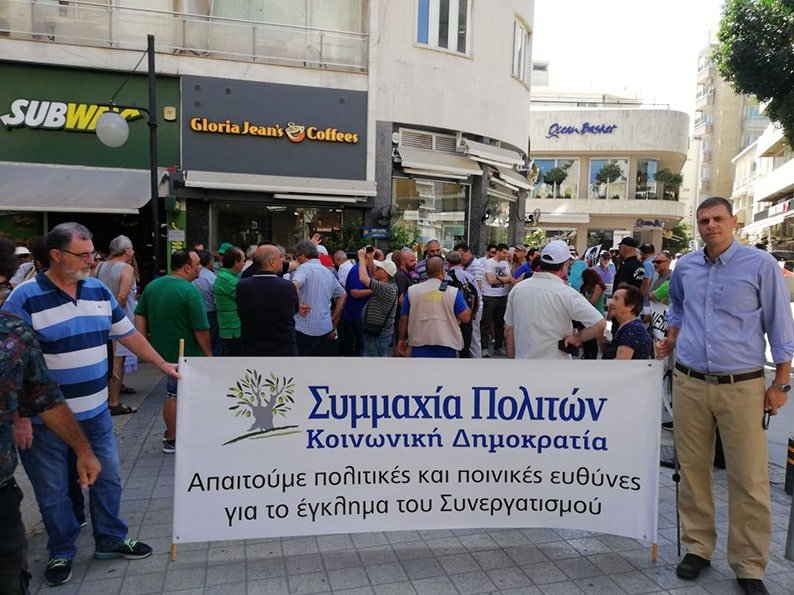 A protest by the civil society group, the Movement Against Foreclosures, took place on Ledra and Onosagorou streets in Nicosia’s old town on Saturday morning, following an increase in withdrawals from the Co-op banks on Friday.

Demonstrators marched down Ledra Street, shouting: “Hands off our houses.”

“We say no to new unpopular draft bills and to lightning fast foreclosures,” said the Movement Against Foreclosures in a statement issued at the protest.

It said that the movement is fighting for the protection of primary residences and small business properties.

The protest, supported by the Citizens’ Alliance, Edek and the Green parties, follows the recent Co-op sell-off to Hellenic bank and statements on Thursday suggesting if the deal did not go ahead the Co-op could be liquidated, prompting queues at the bank as customers withdraw money.

“The comments about the remote, theoretical probability of the liquidation of the Cyprus Cooperative Bank were made to stress the most extreme negative consequences if the transfer of the Cyprus Cooperative Bank to Hellenic Bank is not completed, a solution which under the circumstances constitutes the only alternative,” a central bank spokesperson said on Friday, in an attempt to allay fears.

It was reported that 70 million euros had been withdrawn by lunchtime on Friday.

“Unfortunately, Anastasiades’ government, irresponsibly and catastrophically, brought things, yet again, to a tragic impasse,” said the Citizens’ Alliance in support of the Movement Against Foreclosure’s demonstration in a statement.

The party said that the Co-op bank is state-owned and its sale equals to the sale of state-owned property.

Edek also issued a statement of support for the protest and criticised the central bank’s comments on Friday,

“Unfortunately, the Central Bank of Cyprus, instead of protecting the Co-operative Bank and most of all the depositors through its actions, has through rash actions and statements created an additional problem, if one takes into account the withdrawal of approximately over 70 million euros from the Cooperative Bank.”

The Solidarity Movement was equally scathing.

“Those governing have the full blame, and even if the story is changing, in the eyes of the people they are believed to be guilty,” a party statement said.

A member of Akel’s political office, Christos Christofides tweeted that the protest was: “Against the foreclosures on home of families that don’t have and can’t pay. Against the financial crime at the Co-op. Against the corruption, interests, lack of transparency, and deals that call the shots.”

Following the protest, Akel MP Aristos Damianou noted that the Co-op had been under the “complete control” of the Anastasiades-Disy government since August 2013.

“The Co-op then had €14 billion in deposits, €11.5 billion in loans, and €1.2 billion in shares. Today, they are leading it to a coordinated liquidation, and they have the audacity to try and attribute blame elsewhere,” Damianou said.

The main opposition MP said that the Anastasiades government has to explain the contents of the agreement that is “very bad and damaging to the people”.

According to the agreement, Damianou said, the sellers are not making a profit, but rather are paying the buyer as well.

The government “essentially donated the Co-op to Hellenic Bank and has placed a large financial burden on the backs of the tax-paying citizens.”

Responding to criticism from Akel, ruling Disy party leader, Averof Neophytou said he was sure: ”We will find a solution that secures Co-op depositors, financial stability and the economy of the country.”

He called on Akel, following further discussions on the Co-op agreement to be held next Friday, to discuss any issues.

“I invite and challenge Akel to discuss for as many days as they want with us. Days, nights, months. On any topic. On the economy, the Co-op, the banks, any issue.”

The deal signed between the Co-op and Hellenic Bank last Monday had been the subject of heated debate at Friday’s plenum.

On Thursday, Yiangos Demetriou, head of the central bank’s supervision department warned members of the parliament’s watchdog committee of the ‘disastrous’ effects the non-implementation of the agreement would have. Demetriou had also said that the European Central Bank and the Single Resolution Mechanism, were preparing for a scenario under which the deal was not implemented.

The deal, which provides for the transfer of the Co-op’s operations to Hellenic, including €9.7bn in deposits, would spare the Co-op from being liquidated, Demetriou said.

The implementation of the deal also requires the approval of a bundle of amendments in legislation to help banks reduce their non-performing loans, which the European Commission set as condition for allowing taxpayers’ money to facilitate the deal.

New draft legislation toughening the foreclosure laws has been approved by the cabinet. The House of Representatives is now under pressure to pass them as quickly as possible.