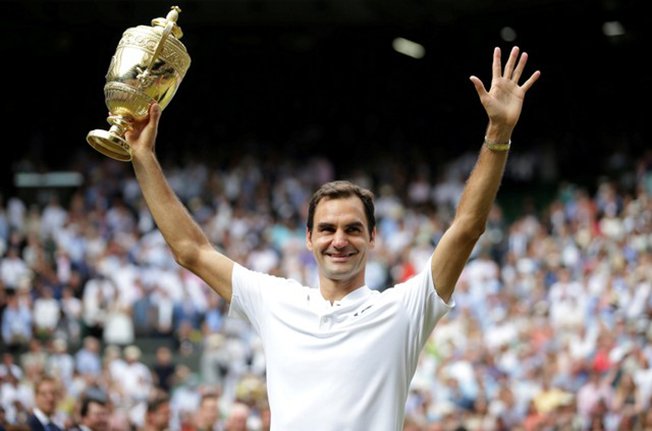 Roger Federer is already the most prolific and oldest winner of the Wimbledon men’s singles title but when he saunters into the All England Club on Monday he will do so as favourite to lift the trophy for a ninth time.

The seemingly ageless Swiss, who turn 37 in August, has planned his year around defending the title he claimed last year by beating Croatia’s Marin Cilic.

If anything Federer’s 2017 Wimbledon fortnight was the most impressive of his career as he swept through the draw without losing a set for the first time — ending a five year wait to nudge ahead of Pete Sampras on the all-time list.

Nothing that has happened in the past 12 months suggests Federer’s hunger is diminished with victory at this year’s Australian Open taking his Grand Slam title haul to 20.

He skipped the claycourt season which was against dominated by his great rival Rafael Nadal who earlier this month won the French Open for an 11th time to move to within three of Federer’s record Grand Slam tally.

Federer returned to the grasscourts in Germany, winning the title in Stuttgart before reaching the Halle final this month where he was surprisingly beaten by Croatian Borna Coric.

While Coric’s victory offers some encouragement for the rest of the field, Federer will not have dwelled on it.

After all, he lost to veteran German Tommy Haas in the build-up to last year’s Wimbledon but was untouchable once he arrived in his favourite English country garden.

“Federer is the favourite, he is playing at least as well as he was last year,” former world number one Mats Wilander, the face of Eurosport’s coverage, told Reuters.

“Yes he has lost a few three-set matches this year but Wimbledon is completely different.”

Friday’s draw handed Federer a comfortable looking route into the second week but while Wilander says the Swiss will again be the man to beat, he believes there are enough threats to make this year’s tournament the most intriguing for years.

“It’s not like Nadal at the French Open,” Wilander said. “I would back the field over Federer, just.”

Second seed Nadal, who won the first of his two Wimbledon titles in an epic final against Federer 10 years ago, has not been beyond the fourth round since 2011 but arrives full of vim and vigour and could thrive in the predicted hot conditions.

“He doesn’t necessarily love grass the first week because it’s green and slippery,” Wilander said. “But if the weather’s hot and it gets quick and bouncy, watch out in the second week.”

Third seed Cilic saw his final hopes wrecked last year by a painful blister but he won the Queen’s club title last week and according to Wilander is a player even Federer fears.

“Cilic for me is second favourite,” Wilander said. “You do not want to play against Cilic. He has won one (Grand Slam title) and he feels like he’s overdue a second one.

Three-times champion Novak Djokovic appears to have rediscovered his ‘human brickwall’ capabilities but twice champion Andy Murray is only a handful of matches into a comeback from a hip injury that needed surgery in January.

Of the new generation Alexander Zverev is seeded fourth but it is Australian Nick Kyrgios who looks the most likely to make an impression on the Wimbledon lawns.

The maverick 23-year-old almost beat Federer in Stuttgart and at Queen’s club last week served 98 aces in four matches before being edged out by Cilic.

Tripartite meeting for diaspora to be held this week

Super Saturday lives up to its billing