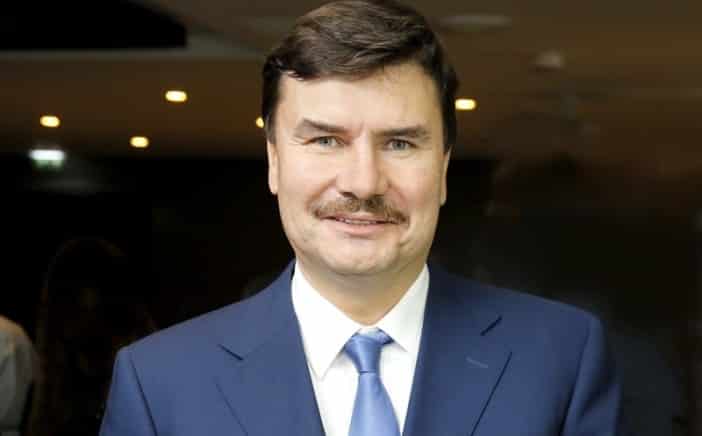 RCB Bank intends to stay in Cyprus to continue developing its operations and adjusting to stricter anti-money laundering rules even as increasing geopolitical tensions, and subsequent sanctions imposed by the US and the EU targeting Russia, hurt the business environment, its top executive has said.

Kirill Zimarin, the bank’s chief executive officer (CEO) and main shareholder, told the Cyprus Business Mail that while the bank is expanding its branch network on the island, it is also developing its online and digital service which will allow it to lower the bar of accepting new customers.

With confidence in the island’s banking system being tested for the second time in six years as shown by the events unfolding around the Co-op, RCB, partly owned by Russia’s state-controlled VTB Bank, is increasingly eying the non-Russian segment of the Cypriot market.

At the same time, the bank’s Russian business with both physical presence and economic substance on the island, home of a community of estimated 30,000 Russians, continues to grow steadily, he said.

“International tensions, regional conflicts, protectionism and sanctions do not help doing business,” Zimarin said in an interview, his first to the Cypriot press. “But they don’t stop business. For example, we see a growing number of non-Russian customers.”

As a result of tensions between Russia and the West – which dramatically soured more than four years ago when Russia invaded and annexed the Crimean Peninsula – the share of Russian clientele at RCB is decreasing, the banker said. Today, RCB’s Russian clientele accounts for 12 per cent of the bank’s business, both in terms of number of customers and volume.

The bank was incorporated 23 years ago as Russian Commercial Bank and renamed RCB Bank in 2013, a year before it became one of the four Cypriot banks jointly supervised by the European Central Bank and the Central Bank of Cyprus. It is one of the youngest lenders on the island with a network of 10 branches and simultaneously one of the most profitable. Last year, it posted an after-tax profit of €97.2m compared to €81.7m in 2016. It maintained a minimal non-performing loans ratio of 0.2 per cent in December 2017, compared to the system’s 44 per cent.

“We are continuing to develop business in Cyprus,” Zimarin said. “Do the sanctions and stricter AML (anti-money laundering) requirements create complications? Of course, they do. Yet, it is neither the first challenge that we are dealing with nor the last one.”

The US, rocked by an investigation into the alleged Russian interference in its 2016 presidential election which touches the White House and members of President Donald Trump’s family and advisors, announced in April a new round of sanctions targeting Russian entities and individuals linked to Russian President Vladimir Putin and suspected of malign activities. A month later, and after a visit of a US Treasury official on the island, several supervisory bodies advised supervised financial and corporate services providers to consult US and UN sanctions lists.

In 2014, VTB which owns over 46 per cent in RCB, was also placed under US sanctions.

“We closed around 50 per cent of accounts belonging to PEPs (politically exposed persons),” said Zimarin. “We approve only 10 per cent of applications of new accounts by international clients. These rules are not new. We are working with these rules all the time.”

“It’s not only about accepting a customer anymore; you have to accept a business model of such customer,” he said. “My strong understanding, when referring to the role of Cyprus as an intermediary in cross-border operations, is that the whole sector will be affected by thorough changes. Therefore, I said that we are moving to split corporate level from individual level.

“The procedure of KYCC at a corporate level became more sophisticated and that brings the question of the cost,” Zimarin said. “Every bank has to make its own assessments, whether it wants to continue this way or another way or whether it is financially strong enough to combine this.”

In April 2016, a report in The Guardian implicated RCB in a transfer of hundreds of millions of US dollars from Bank Rossiya to Sandalwood Continental Ltd, a British Virgin Islands-based firm. Based on the ‘Panama Papers’, the report said two persons with close ties to Russia’s President Putin, including his friend, the cellist Sergei Roldugin, were involved in the transfers, which also had the form of unsecured loans from RCB to Sandalwood. The Panamanian law firm Mossack Fonseca, according to The Guardian, set up Sandalwood and other offshore companies linked to Roldugin who, just like the Kremlin, denied any wrongdoing.

“All the allegations which were formulated in articles regarding RCB were proven to be baseless and unfounded,” Zimarin said. “Roldugin never had any relations with our bank. He was not our customer.”

In November 2017, the Central Bank of Cyprus fined RCB €800,000 citing its failure to comply with certain provisions of the anti-money laundering legislation, which prescribes due diligence and KYC procedures.

Getting fined “is quite unpleasant”, Zimarin said. “However, it is a routine integral part of business, the regulator finds omissions occurred during work and penalises for them.

“In general, the examination was related to the quality stand of clientele files,” he continued. “We did not receive any material remarks, however different minor mistakes were found, which occurred during composition of clientele files, and they were related to availability of required documentation.”

According to the banker, the bank’s low non-performing loans ratio is attributable to RCB’s late entrance in the Cypriot market, which took place two decades after its incorporation.

“We started operating in the local market in 2015,” he said. “Experience is not a number of years but a number of situations. That is why we know that a loan should have only one characteristic: repayability.

“You lend money which comes from the bank’s depositors and you must receive it back,” he said. “You cannot make expansion in lending without thinking about the financial capacity of the borrower to repay it or the market. I think this is the main lesson that we and the whole banking sector has learned from the 2013 crisis onwards.”

“If you sign a document headlined ‘loan agreement’, please repay,” the banker said. “We will take all necessary action to protect the interest of the bank and our depositors. Our recovery policy is strong.”

Neophytou who served as chairman of Omonia FC in 2008 to 2012, withdrew his lawsuit in a surprising move in January after having previously alleged in court that he had signed a guarantee for a €2m loan extended by RCB to the Akel-affiliated club. Neophytou told the court that Christofias had mediated between him and RCB.

“We settled that case, I think to the satisfaction of both sides,” Zimarin said when asked about the bank’s experience from that case. “The main lesson for everybody: If you are borrowing from RCB, this money belongs to our depositors. And we will do our best to secure their interest.”

While the case demonstrated the bank’s links to the local political establishment, these go beyond the former president. The bank currently has four persons sitting in its board who previously held public offices, such as former attorney-general, Petros Clerides, former foreign minister, Erato Kazakou Markoullis, former permanent secretary at the justice and finance ministries, Antis Tryfonides, who all were appointed in 2015 after leaving office two years before, and former permanent secretary of the foreign ministry, Sotos Zackheos, who retired more than ten years ago.

The composition of the board allows the bank to better understand the local market, he continued, and dismissed possible criticism that these political appointments constitute a possible conflict of interest.

Being under the supervision of the ECB and the CBC any appointment at the board goes “through a very thorough assessment of these two institutions conducting the independent valuation that there is no any conflict of interest”, he said and added that future board appointments would require more experience in banking.

Zimarin, who in August last year increased his stake in the bank to 49.9 per cent, after acquiring the 19.85 per cent stake of Russia’s Bank Otkritie Financial Corporation for more than $100m, said that he partly financed the acquisition dividends he received from RCB in the past and credit he received from the bank.

Crendaro, the company via which Zimarin owns his shares in RCB, “as any other shareholder of the bank, was receiving dividends”, he said. “Because of the sound and strong financial model of the bank, the shareholders can borrow money.

“All the transactions were disclosed to the supervisor,” who in turn approved them, he said.

The complete transcript of the interview is available here.

Erdogan expected in the north on July 9

Verstappen wins in Austria as Hamilton fails to finish