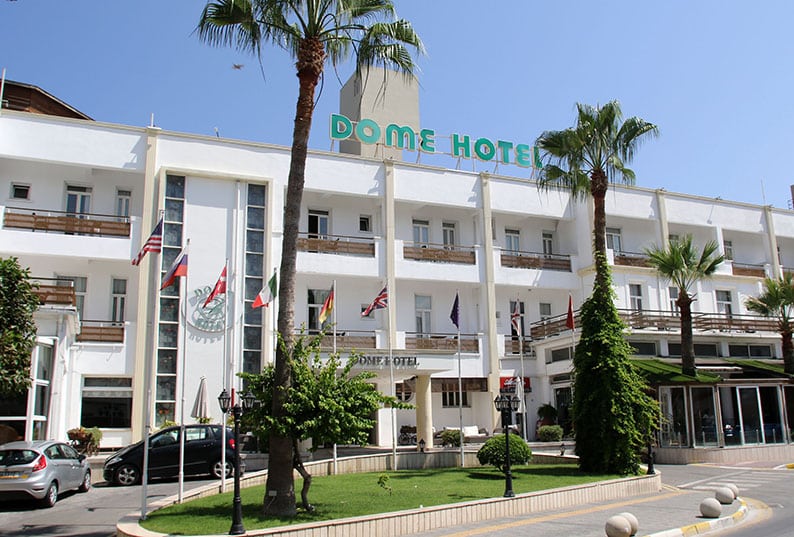 The present day hotel A Kyrenia landmark since 1934 CNA.jpg

A new documentary on historic Dome hotel, long a Kyrenia landmark, tells a tale of glamour, war, loss and solidarity.

Long famous for its receptions and tea parties, the Dome also became a refuge during times of war and continues to offer traditional hospitality by its present-day Turkish Cypriot employees who have resisted any moves to let it fall into foreign hands.

The creator of the ‘The Sad But Proud Story of the Dome Hotel’, Turkish Cypriot journalist Simge Cerkezoglu, decided to tell the story of the hotel, “exactly because of its history”.

“I wanted to do something more permanent, to tell a story, and the Dome has a soul,” Cerkezoglu told the Cyprus News Agency.

The hotel was the first European type hotel to be constructed in Cyprus. Built by Costas Katselli, it opened in 1934. It instantly attracted the upper classes from the surrounding area during British rule, but also many Nicosians, drawn by the idea of the Sunday afternoon teas with the scones the Dome was known for.

The Dome was closely intertwined with the English community of Kyrenia in the 1930s, 40s and 50s, Rita Severis of the Centre of Visual Arts and Research (CVAR), from Kyrenia herself, told the CNA. She cited Lawrence Durrell’s observation of a group of elderly British women living permanently at the Dome and constituted the ‘intelligence service’.

During World War II, the Dome was also a temporary home to wealthy refugee Jews.

In 1974, during the first phase of the Turkish invasion on July 20, the hotel sheltered British citizens living in the area who sought refuge there, while a few days later, hundreds of Greek Cypriots did the same.

Among them was Costas Zambarloukos, Katsellis’ grandson, who remained at the hotel as a prisoner for 15 months until October 1975. He was the last Greek Cypriot to leave and did so with the keys in his hand.

People had remained as enclaved in the hotel, some for a few days, others for months, he said.

The Red Cross used to deliver supplies to the hotel. Turkish soldiers would allow them to worship at the church of Ayios Georgios close by and use the ‘kolympa,’ a sea water natural pool Katsellis had constructed at the edge of the hotel’s grounds.

Around 680 people had sought refuge at the hotel the first three days after the invasion because the hotel provided both security and water.

“My grandfather had brought water from the Thermia springs under Bellapais,” Zambarloukos said.

The invasion halted plans for construction of the Dome 2, in another plot owned by Katsellis, just by the Kyrenia harbour.

“There are a lot of memories, of Greek Cypriots, Turkish Cypriots, Britons, and many others.  They come and go and relive their memories,” said Cerkezoglou.

Costas Katsellis, she said, was a poor but smart man who had a dream and ensured it came true.

For the past decade, the Dome has been jointly managed by its own employees and the union of hotel employees in the north. The goal is for this arrangement to carry on for another decade.

Manager of the hotel, Bayram Karaman, said that their aim is to continue offering the traditional hospitality the hotel is known for and spare it from being bought by another business.

Karaman said that the Dome is a symbol for Kyrenia and its employees would like it to continue to be so. The hotel, he said, was built by Katsellis and for that reason, they left the family’s symbol at the entrance.

He said that they would like Greek Cypriots to see the hotel through different eyes. “We know they have memories, […] if the people don’t support us, the hotel will seize to exist in this form,” he said.

The Dome, which is under the Turkish Cypriot religious foundation, Evkaf, is the only star-rated hotel that has not passed into the hands of Turkish capital. Since the 1980s the employees at the hotel have resisted any attempts to privatise.

In 1997 for example, Karaman said, staff agreed to a 40 per cent pay cut to avert its sale. About a decade ago when it was in a dire financial situation and there was talk of it sale again, it was discussed whether it could operate without a boss.

The hotel’s 140 employees, Karaman said, are locals, and would like the Dome to continue to employ local staff which can offer traditional Cypriot hospitality.

According to Karaman, who has been working at the Dome since 1976, the hotel has many repeat visitors, mainly Britons and north Europeans. Some have been coming back since before 1974.

Zambarloukos, meanwhile, still has the keys to his grandfather’s hotel.

Zambarloukos went back to the Dome in 2003 with his mother when the crossings opened.

He still dreams of it one day being returned to his family.

Our View: Is it any wonder we try to avoid paying tax?