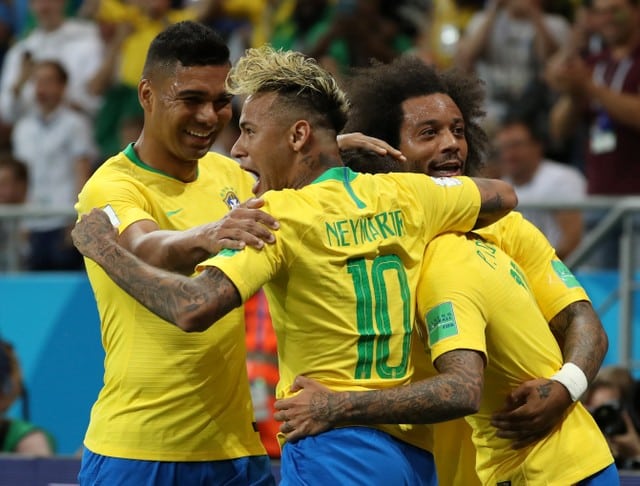 There are not many teams in world football who boast an even moderately successful record against five-time World Cup winners Brazil but in recent years Mexico have proved they have what it takes to upstage the yellow-shirted powerhouse.

Whereas seven of the teams in the knockout stages of the tournament have failed to record a single victory over Brazil since 2000 – admittedly Spain, Denmark and Belgium have only played the South American giants once each – Mexico have won six of their 14 match-ups with Brazil in the same time period.

Only France, who have beaten Brazil three times in six meetings, have a better record of the remaining teams in the last 16.

More impressively, Mexico have won six of their last nine competitive fixtures against Brazil, losing just twice, and will go into their last 16 clash in Samara on Monday full of confidence.

A Mexican side also overcame Brazil to win the gold medal at the 2012 Olympics in London and Mexico held the hosts to a goalless draw in the World Cup group stages four years ago.

However, on various occasions in the past these successes over their illustrious rivals from the south have proven false dawns for Mexico and often a catalyst for Brazil.

Mexico’s 1-0 win at the 2001 Copa America is a case in point. It was a disastrous tournament for Brazil, who were knocked out by Honduras at the beginning of Luiz Felipe Scolari’s reign. However, that team went on to win the 2002 World Cup in Japan and South Korea just 12 months later.

Likewise, at the 2007 Copa America Mexico handed Dunga his first defeat as Brazil coach. Brazil went on to win the tournament, whilst Mexico lost in the semis.

Mexico may have produced some fine performances down the years but when it comes to the crunch games they often fail to deliver, as evidenced by their abysmal recent record in the World Cup knockout stages.

Their defeat to the Netherlands in the last 16 in 2014 was the sixth successive time El Tricolor have been knocked out in the second round.

Mexico last reached the quarter-finals when they hosted the tournament in 1986 and despite featuring at 15 World Cups they have only appeared in the last eight twice, both times as hosts.

If they are to get over the hump and progress to the quarter-finals for the first time in over 30 years, they will have to overcome a Brazil side using the same defensive organisation and pace on the counter-attack that did for Germany in the group stages.

However, Brazil are not Germany and possess far more creativity and fluidity going forward, which could cause problems for a Mexican team still reeling from a 3-0 loss to Sweden that almost ended their tournament.

It promises to be an action-packed tie in Samara with both sides susceptible to pace defensively while possessing plenty of speed in attack themselves.

If Mexico can harness the spirit of recent results against Brazil they could record the most impressive victory yet over their illustrious opponents and change recent Mexican World Cup history.

Order of play for Monday at Wimbledon