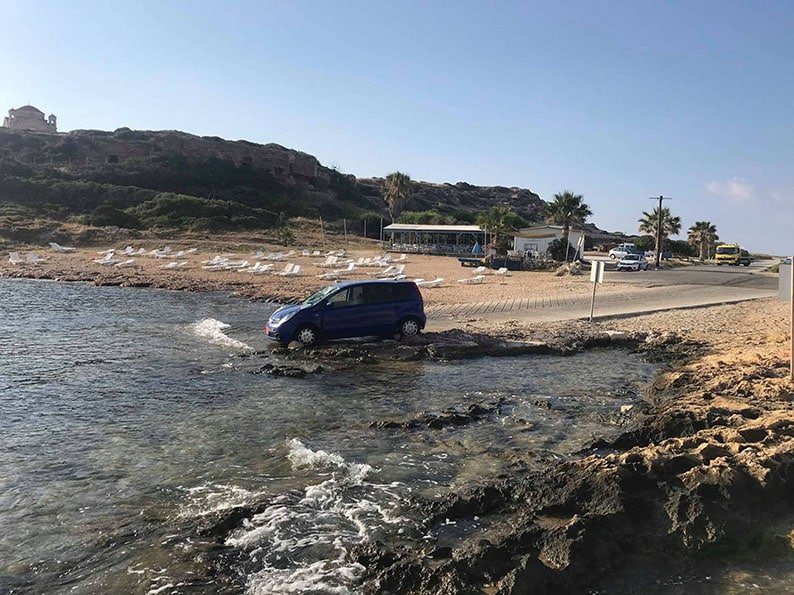 The abandoned car from the alleged hit-and-run

THE 35-year-old man suspected of intentionally hitting two British tourists with his car some 10 days ago in Paphos, killing one and injuring the other, was referred to the criminal court for trial on Monday.

The man was brought into court on Monday after his eight-day remand expired. He was referred to criminal trial on suspicion of premeditated murder and attempted murder.

He will remain in custody until August 3 when the trial proceedings are set to begin.

The suspect allegedly deliberately hit two British tourists with his car in the early hours of June 24, leading to the death of 39-year-old Charlie Birch and the injury of his 32-year-old brother-in-law. The suspect claims it was an accident.

Prior to the alleged hit-and-run there had been an altercation at a bar in Coral Bay during which the two Britons reportedly tried to defend a 23-year-old woman who was being abused by the suspect. The couple then left the bar and drove off.

The two British tourists left later, but, on their way back to their apartment the 32-year-old reportedly told police he had turned around and all he could see were the lights of the vehicle coming towards them “with obvious intent” to hit them on the Peyia-Ayios Georghios road in Paphos.

The two men were taken to Paphos hospital where Birch was pronounced dead on arrival.

The 35-year-old man and the 23-year-old woman, reportedly his girlfriend, were arrested shortly afterwards after abandoning their rental vehicle which had been driven into the sea at Ayios Giorghos harbour.

Multiple witnesses place the pair at the harbour saying both had been in the water. They then left the harbour on foot and were picked up on the road shortly afterwards by police.

Speculation suggests it was an attempt to get rid of the evidence. The car was lifted out of the water by the fire service.

Both were remanded for eight days by the Paphos court later that day, but the woman was released last Thursday without charge as no incriminating evidence was found against her.

The 23-year-old, who has reportedly provided important information that corroborates testimony incriminating the suspect, would likely be called as a prosecution witness.

Federer eases through, Stephens crashes out