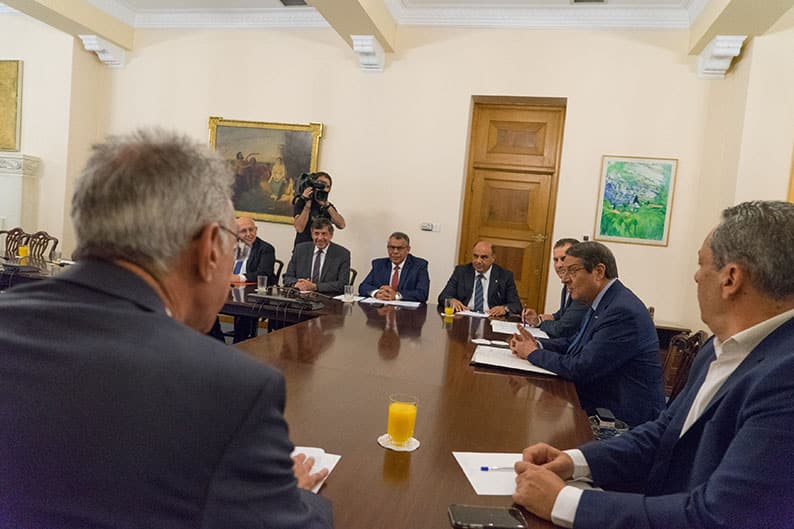 The Chamber of Commerce and Industry (Keve) on Monday lent its support to Hellenic Bank’s acquisition of the ‘good part’ of the Cyprus Cooperative Bank but stressed that solving the broader problem of delinquent loans in the banking sector was just as important.

The transaction between Hellenic and the cooperative bank – subject to parliamentary approval – was among the issues discussed in a meeting between Keve officials and President Nicos Anastasiades.

“The government has rightly salvaged, at great cost, the cooperative banking sector, but doing so without a comprehensive and definitive resolution to the issue of non-performing loans would be inconceivable,” Keve chairman Christodoulos Angastiniotis told reporters later.

At the meeting, Keve raised a number of issues of concern to them, particularly the announced reversal of pay cuts in the broader public sector. The wage and pension cuts were introduced in 2011.

According to Angastiniotis, the president assured them that the resulting increased state payroll would not be to the detriment of public finances.

“We have received assurances that the pay rises will be granted provided that the cost of the civil service shall not exceed, per year, the increase in nominal GDP,” he said.

Marios Tsiakkis, Keve’s general secretary, said that in a memo handed to the president, they propose that the restoration of public sector wages to 2011 levels must go in hand in hand with legislation in the pipeline concerning the modernisation of the civil service and the reform of local government.

Keve also received assurances from the president that the town-planning incentives granted by the government – and which expire at the end of the year – would be extended.

They said these changes should not negatively impact Cyprus’ competitiveness as a centre for fiduciary services.