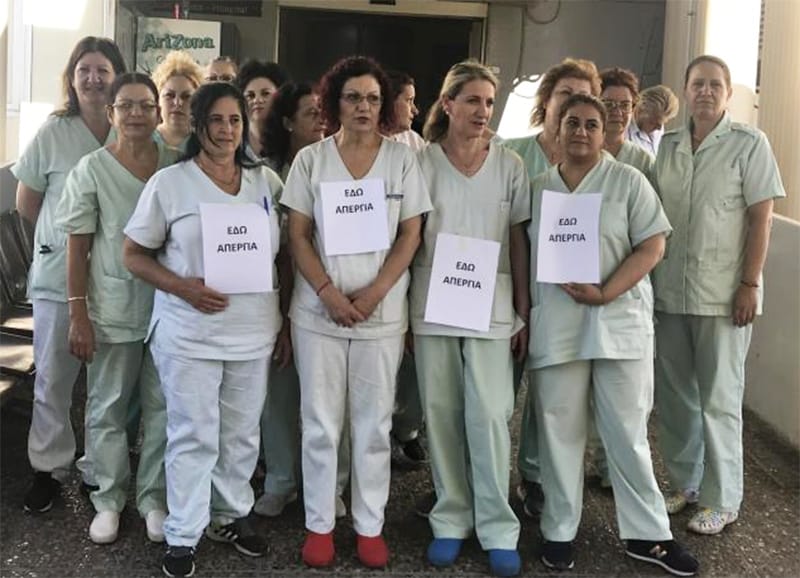 The claims by trade unions on the numbers of orderlies at the Larnaca general hospital following their strike on Monday morning to protest against lack of staff, are baseless and misleading, the health ministry said.

The orderlies at the hospital started an open-ended protest at around 7am on Monday with trade unions saying that their number had fallen to 25 from 31.

“The lack of orderlies has been a problem for the past two to three years,” Peo’s Costas Komites said.

The representatives of Sek and Peo trade unions met in the morning with the doctor who is the acting director of the hospital, who told them that the hospital had made an effort to fill the vacancies.

Unfortunately, Comites said, “the health and the finance ministries have not responded to letters from the hospital’s management to fill the posts.”

The unions said continuing the strike would depend on the ministry’s response.

The ministry said later in the morning that the strike was not justified, as, of the 31 posts, only one is vacant and is expected to be filled within the coming days. In addition, one orderly that used to work at the Larnaca hospital resigned a few days ago, the ministry said, adding that necessary procedures to fill that post will be launched as soon as they are officially informed of the resignation by the hospital.

Four more orderlies are not in a position to perform the duties for which they have been hired, as they have been evaluated for light duties only, although they are registered as orderlies, the ministry said.

It also said that it had not received any requests for filling vacant orderly posts other than the one that is to be filled shortly.

Thus, the ministry said, claims of staff shortages of 20 per cent, “are baseless and misinform the public opinion”.

It said that it expects trade unions to show a responsible attitude and cooperate with the ministry in exposing “those who take advantage of the system at the expense of their conscientious and diligent colleagues”.

It also warned that it would show “zero tolerance” to those who, “instead of ensuring the proper functioning of public hospitals and the proper service of patients, tarnish the work being done by the majority of those serving in public hospitals”.

Joe Jackson to be honoured in two memorial services