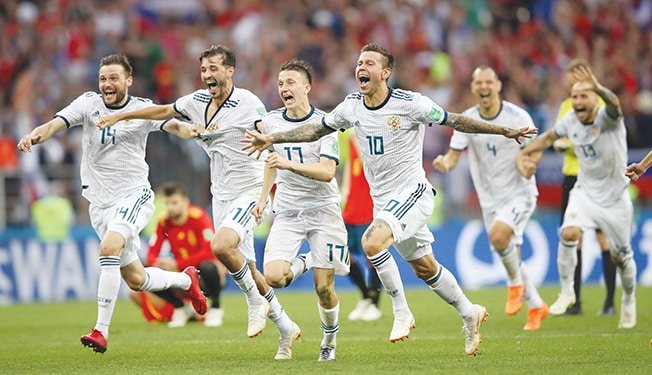 Russia have reached the quarter-finals for the first time since 1970. They face Croatia on Saturday night

A roaring Luzhniki Stadium crowd, dogged defending and a dose of Russian luck saw the World Cup hosts to a penalty shootout victory over Spain on Sunday, though for some it also took divine intervention.

“Thank God, we were lucky, that’s it,” goalkeeper Igor Akinfeev said after he stopped two Spanish penalties, the second with his trailing foot as he dived away from Iago Aspas’ strike.

One fan felt Russia’s number one deserved more than just the man of the match award, posting a mocked up photograph on social media of Akinfeev as a haloed Russian Orthodox saint.

“In the second half, we were trying to defend. We were hoping for penalties and that’s what happened. Thank God,” he said, while also extending a thank you to the 78,000 home crowd.

Coach Stanislav Cherchesov, still refusing to show any sign of the immense relief he must be feeling after steering the hosts out of the group phase against most Russians’ expectations, would not discuss his emotions and put the result down to packing a five-man defensive line to smother Spain.

“I think we chose the right tactics,” he said as Russia now contemplate a first World Cup quarter-final since 1970.

“I think we should have countered faster. But if we had gone for a different tactic we would not have succeeded.”

Artem Dzyuba, the lone centre forward whose thankless task it was to try and punish Spain on Russia’s few breaks, was considerably less restrained: “We are insanely happy,” he said.

“The fact that the whole country is proud of us is the most important thing,” added Dzyuba, who scored from the penalty spot just before halftime to cancel out an early own goal.

“We gave everyone a festival and believed in our success until the end,” he said. “Today we had to endure, endure and endure everything, go through pain and cramps.”

Cherchesov said his players would need a thorough rest before he could be sure of who he can choose from for the quarter-final in Sochi on Saturday. Definitely out, he said, is midfielder Yuri Zhirkov, who went off at halftime.

“Zhirkov might be available for the final,” he said, dryly.

Dzyuba, unable to contain his delight after keeping his nerve to plant the equaliser past David de Gea after Gerard Pique’s handball, said he found stepping up to take the penalty intimidating but that the heavens had been on his side.

“We’ve put up with so much through the years, so much crap,” he said, of Russia’s long years in the footballing wilderness.

“The football god had always turned his back on us – but not today.”

It will be electrifyingly good

Guardiola knows there are more important issues than football

Olympics to begin in July 2021