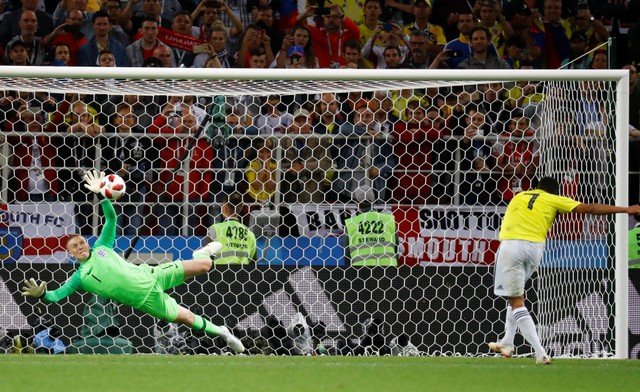 England finally shook off their penalties curse when they beat Colombia 4-3 in a shootout on Tuesday after drawing their World Cup last-16 clash 1-1 following extra time after the South Americans had equalised in the 93rd minute.

England had previously lost all three World Cup shootouts and three out of four in the European Championship and looked on course for another nightmare when midfielder Jordan Henderson saw his spot-kick saved by David Ospina.

However, Colombia’s Mateus Uribe then hit the bar and Jordan Pickford saved from Carlos Bacca, leaving Eric Dier to score the decisive penalty and earn a quarter-final against Sweden while denying the Colombians a second straight run to the last eight.

England‘s first knockout victory since 2006 was particularly sweet for coach Gareth Southgate, whose shootout miss decided the Euro ’96 semi-final, and vindicated – just – his decision to field a second-string side in the final group game defeat by Belgium to secure an easier route towards the final.

He should also be given credit for insisting his players practice penalties, even bringing in a psychologist to help them, after a succession of his predecessors wrote the whole process off as a lottery beyond their control.

Southgate described the win as fantastic, adding: “I think we deserved it as well. We showed incredible resilience to come back from huge disappointment at the final whistle and keep our calm. It’s a special moment for us.”

If England get past Sweden they face a potential semi-final against hosts Russia or Croatia for their first appearance in a final since winning the World Cup for the only time in 1966.

Earlier the tournament’s leading scorer Harry Kane smashed in a 57th-minute penalty, his sixth goal at the finals in Russia, and England looked to be through until Yerry Mina headed an equaliser in the third minute of stoppage time.

“We are so unlucky not to go through in 90 minutes,” said Kane, who also converted his shootout kick along with Marcus Rashford and Kieran Tripper. “No one laid on the floor and we stood there when it counted. It was a big night for England.”

There had been precious little drama – though much petulance – throughout most of normal time as a Colombia side shorn of injured playmaker James Rodriguez set out to defend.

England were the better side without looking too dangerous but were then gifted the lead when Carlos Sanchez hauled down England‘s captain and talisman Kane once too often.

After four minutes of mayhem as Colombia protested, Kane kept his cool and smashed in his third spot kick of Russia 2018.

When Juan Cuadrado blazed horribly over the bar with the goal gaping 10 minutes from time with Colombia’s first chance of the match it looked all over for them but there was a fiery sting in the tail of normal time.

Pickford made a superb save to touch wide what could have been the goal of the tournament from Uribe but from the following corner – Colombia’s first of the match – giant defender Mina rose highest to head in the equaliser.

England substitute Dier missed the best chance of the extra period when he headed over but made up for it in emphatic style before being mobbed by his relieved team mates.

“It was a nervous one. I’ve never really been in a situation like that before but felt I had to score after missing the “To get knocked down like we did is difficult to come back from. We knew what we had to do and we stayed calm. We never panicked. We were ready for that.”

Pickford added: “I did all my research. I’ve got power and agility. I don’t care if I’m not the biggest keeper because it’s about being there in the moment and making the save and I was.

“It’s all about the set position and I got a hand to it. We knew we had this game, even if it had to go to penalties, we knew we were capable of winning.”