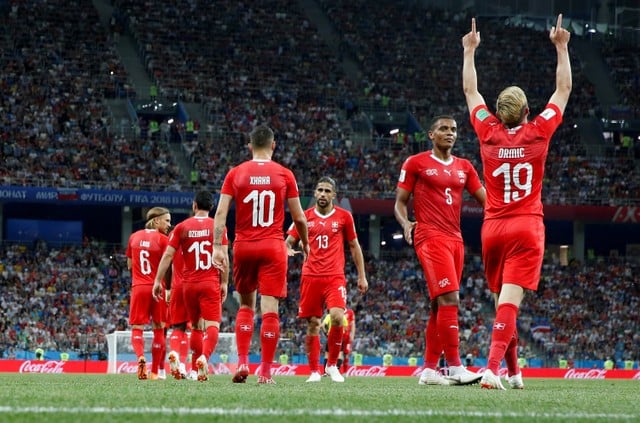 Switzerland go into their last-16 World Cup match against Sweden in St Petersburg on Tuesday with a much more exciting squad than those at past tournaments, but only victory will secure a lasting legacy for their so-called ‘Golden generation’.

The Swiss may lack quality up front, but sound organisation and teamwork have enabled them to overcome their shortcomings, although they are bound to be tested by the absence of their captain Stephan Lichtsteiner and Fabian Schar.

The defensive duo, who are suspended after picking up two yellow cards each, are an integral part of the Swiss back line, and if the is to progress at the tournament it must first work out how to cope without the two.

But with players such as Ricardo Rodriguez, Xherdan Shaqiri and Granit Xhaka, who ply their trade in Europe’s top leagues, the Swiss still have a decent chance of reaching the quarter-finals for the first time since they hosted the World Cup 1954.

Draws with Brazil and Costa Rica and victory over Serbia secured second place in Group E for the Swiss behind Brazil, while Germany’s shock elimination means Vladimir Petkovic’s side face far more limited opponents in Sweden than they would have dared to hope for when the draw was first made.

Like the Swiss, the Swedes have gone about their campaign with a brisk, businesslike efficiency, with their only blip coming in their last-minute 2-1 loss to Germany, which was bracketed by victories over South Korea and Mexico.

Both teams escaped the group stages with a minimum of fuss, scoring five goals each.

The goals have been spread around, with Swedish skipper Andreas Granqvist the only player on either team to have scored more than once in Russia, with both his goals coming from the penalty spot.

The group stages have shown that Sweden may be content to block the spaces in midfield without pressing too high and try to pinch a goal on the counter as they look to match or better their run to the semi-finals in 1994.

The plan will be to usher the Swiss down the wings and rely on their imposing centre backs Granqvist and Victor Lindelof to deal with any crosses into the box.

Sweden coach Janne Andersson’s admission that he has a list of penalty takers sorted in his mind before the match tells its own story, and given each team’s well-drilled defence, a penalty shootout is not beyond the realms of possibility.

While that might offend the purists, Sweden midfielder Albin Ekdal has already responded to criticism that his side are not the most easy on the eye.

“Who the hell cares?” he said. “We’re best at maximising. We can’t compete with France or Spain when it comes to skill on the ball, but luckily football is not decided by ‘tiki-taka’ passes.”

Thai boys’ cave ordeal not over as rain threatens [video]