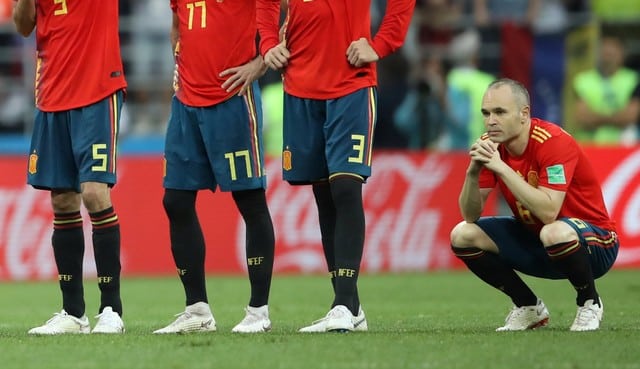 In football there can be a brutal disregard for reputations as Andres Iniesta (above), Cristiano Ronaldo, Lionel Messi Thomas Muller and other ‘greats’ faced up to inglorious exits from the World Cup spotlight

You have to ask why were Germany so ‘stupid and pointless’ (in the words of my boy) and why did Spain sack manager Julen Lopetegui when irked by Real Madrid and then not appoint Pep Guardiola for the World Cup? Big mistake, as well as those ridiculous shirts!

With teams from Africa – GONE, Asia – GONE, Oceania – GONE, North America – GONE, the volatile South American temperament threatens to open the door to all European World Cup semi-finals; France, Belgium, Croatia and England (are England still classified for the moment as being European?).

Watching games on RIK and listening to commentary on BBC Radio the delay on the sync has been a surreal experience, as you end up hearing if a penalty has been scored before you see it. I hadn’t realised that the sync was so far out as the commentary kept suggesting that England were already as good as in the final.

Belgium 3 Japan 2 – Wow what a game! Was this THE game of the World Cup 2018? Two goals behind with 30 minutes to go Belgium dug incredibly deeply and turned the game around to win with last kick of the game.

Humble pie was by then being eaten in huge chunks at the end of the game by Chris Sutton and the BBC Radio commentary team, as at two goals down to Japan they had mocked the Belgium ‘Golden Generation’ calling them wobblers and bottlers as they savaged the manager Roberto Martinez and described him as ex-Everton waffler.

Brazil not quite firing on all cylinders progressed to a big quarter-final encounter against the new ‘Tartan Army’ as Neymar Jr continued to throw hissy fits. After losing the spaghetti off the top of his head (which caused him to lose his balance and roll over repeatedly), he opened the scoring against Mexico, before providing an assist for Roberto Firmino, who I did say would score goals if only Brazil would pick him.

Next up for England in the quarters are Sweden having scraped or scrapped past Colombia and Switzerland respectively after what were awful games.

Gareth Southgate had reminded me of Sir (not Sir Alex Ferguson) in the classroom who had swallowed the text books and knowing every word of the coaching manuals had offered pedantic methods for every possible set-play scenario, but the players’ heads seem to be befuddled by his tactics. Does it matter how you win?

It’s a bit like when you see a golfer with endless pre-shot routines on the tee and you feel like saying “just hit the ball”.

Meanwhile sales of waistcoats have risen by some thirty per cent since the World Cup began. Surely it cannot be a style call but a manager’s OCD, which Gareth had been unwilling to change after the defeat to Belgium, so he must have been forced to wear his underpants inside out (a tip from Adrian Mutu) to change his fortune and to ward off the evil spirits lurking in the British media.

As the inevitable ‘changing of the guard’ ushers in a new footballing generation and Kylian Mbappe took centre stage, France and Uruguay ignored the script and denied us a final ‘Duel of the Titans’ between Lionel Messi and Cristiano Ronaldo. In football there can be a brutal disregard for reputations as they, Andres Iniesta, Thomas Muller and other ‘greats’ faced up to inglorious exits from the World Cup spotlight. Let us never forget how much they all have contributed to the beautiful game!

I am not going to put a jinx on Russia by tipping them to beat Croatia but instead repeat what I said before the last game that I don’t expect them to roll over and play dead, as their euphoric Russian people celebrate and ‘mangle the firewood’.

After 120-minute plus games and penalties, cramp is becoming all too common… so when I return from rehab after the World Cup I will be forced to change the sofa.

In the midst of a fantastic football spectacular in Russia, I imagine George Best (one of the greatest footballers never to grace the World Cup) would have said to Vladimir Putin: ‘Make love not war’.