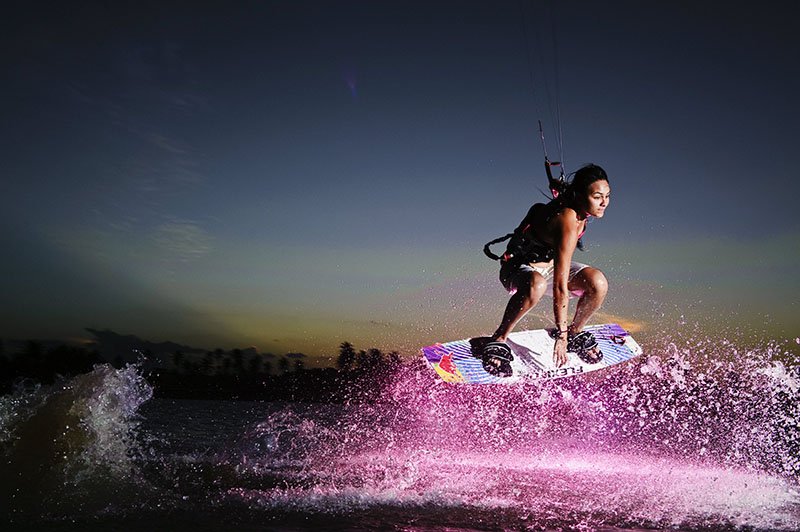 For the sixth year in a row the King of Kite festival will host the only international kitesurfing championship on the island.

Kitesurfs will be up this weekend at the Kahuna Surfhouse in Larnaca (which is said to have perfect conditions for kite surfing) where all the action will be. Every year water sports fans flock to the event for the sea, sun, sport and the fact that every year a professional kiteboarder hosts the event and crowns the winner. In previous years Kevin Langaree and Hannah Whiteley had the honour, and this year Bruna Kajiya from Brazil will be the one to watch out for. Apart from hosting races and judging the Free Air competition to crown the King of Kite 2018, she will also treat spectators to a demo of tricks in the water.

Kajiya is considered to be the top female kitesurfer in the world at the moment as she has won five home titles and she gained second place at the world championship. She has been competing in the sport since she was six-years-old, earning the name ‘Little Fish’ from the older kids at her local pool. The rush of competing and winning is what has driven her to work hard, train, follow a healthy regime and always enjoy what she does.

Speaking about the event, the head of the King of Kite organisation team Elias Mantovanis said “the glamour of the event gets bigger every year. This year we have even more participants from abroad, especially from Greece and Israel, while local athletes and sports fans are also increasing in number.”

He also added that athletes take part in the event for the prestige of winning, rather than the cash prize, which is €9,000 this year.

Kitesurfing is the fastest growing watersport in the world as it combines all the thrills of windsurfing, surfing and wakeboarding. It is a sport that is gaining huge popularity on the island and the aim of the festival is to put Cyprus on the kitesurfing map. Not only is it an amazing sport to be involved in, it is also fantastic to watch.

The latest trend when it comes to kitesurfing is foilboarding, which involves a hydrofoil board that extends below the board into the water. This design causes the board to leave the surface of the water at various speeds. Be sure to catch lots of this during the festival.

Apart from the sport itself, there will also be a bar offering food and drinks and stalls selling surf and beachwear accessories. There will also be non-stop music with DJs and MCs to add even more hype to the event.

The event will begin on Saturday at 10am until 12 noon with registration. Things will kick off at 12 noon when everyone can meet Kajiya before the championship begins. The award ceremony will take place at 6.30pm, followed by a beach party. Sunday will include a kitesurf session and coaching with Kajiya at 1pm. During this time Kajiya will give kitesurfers of all levels tips on how to be better at the sport. There will also be a bar and stalls open all day.

If you want to compete just go to https://serieseight.typeform.com/to/Nusfed to register and to https://kahunasurfhouse.eu/king-of-kite to read about the rules.

If you would like to watch those competing doing gymnastics in the air with huge jumps at crazy speeds while flashing beautiful colours of their kites, then make sure you are at the Kahuna Surfhouse in Larnaca over the weekend.