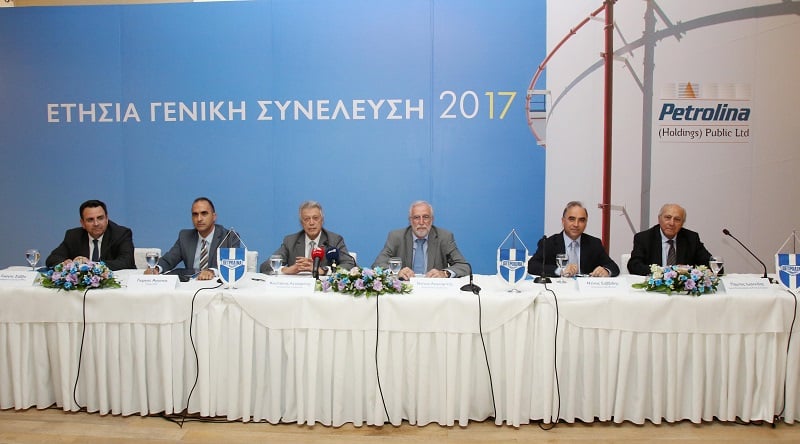 Board of Directors’ new structure has been reaffirmed

Second phase of the Vasiliko oil terminal is in progress

The approval of the new structure of the Board of Directors, the appointment of Mr. Kikis Lefkaritis – until recently Executive Chairman of the Company’s Board of Directors – as Honorary Life Chairman of the Company, as well as the appointment of Mr. Costakis Lefkaritis as the Executive Chairman took place at the 18th Annual General Meeting (AGM) of the shareholders of Petrolina (Holdings) Public Ltd on 27 June 2018.

The new Executive Chairman, Mr. Costakis Lefkaritis, noted in his address that the second phase of the Vasiliko oil terminal is already in progress and that all the procedures for the construction of a liquid petroleum gas terminal in Vasiliko are progressing within the framework of a consortium in which the Company participates. Mr. Lefkaritis underlined that “our goal is the completion and operation of both terminals according to the timelines set by the government”. He added, “we estimate that the company-owned land plots hosting our Company’s terminals, located in Larnaca, will be included in new town-planning zones so that they can be developed accordingly”.

Addressing Petrolina’s shareholders, Mr. Costakis Lefkaritis noted that Mr. Kikis Lefkaritis voluntarily decided to step down from the position of Executive Chairman after a 60-year contribution to the Company. He said: “the contribution of Kikis Lefkaritis to the establishment and growth of our Group, as well as to the Cypriot economy in general, is undoubtedly invaluable”. Mr. Lefkaritis also thanked the members of the Board of Directors, the management team, station operators, staff, auditors, legal advisers, as well as all the Company’s shareholders, for their trust.

Mr. Dinos Lefkaritis, Chief Executive Officer of Petrolina, commented on the issue of the transfer of oil and gas facilities from Larnaca’s shoreline to Vasiliko, particularly with regard to the second phase of the oil terminal in Vasiliko’s area, which is currently under construction. Upon completion of the second phase, which, inter alia, includes the construction of an automated tank-filling system and additional tanks, Petrolina’s terminal in Vasiliko will be fully operational and ready to meet the entirety of the Cypriot market’s needs.

The Company has so far invested the amount of €35m for the first phase of the terminal and the acquisition of land, while the additional capital cost for the second phase is estimated at €24m. Mr. Dinos Lefkaritis also highlighted the Memorandum of Cooperation and Understanding, recently signed by Petrolina and the Government of Cyprus, according to which the Company agreed to the set timelines for the transfer of both oil and gas storage facilities. Once the transfer to Vasiliko is fully completed, the dismantling of the facilities in Larnaca will start, including the demolition of tanks and clearing of land.

The Annual Report of 2017 can be found on Petrolina’s website www.petrolina.com.cy.

Hezbollah role in Syrian south exposes limits of US policy

Sweden will be tougher test for England than Brazil, says Eriksson