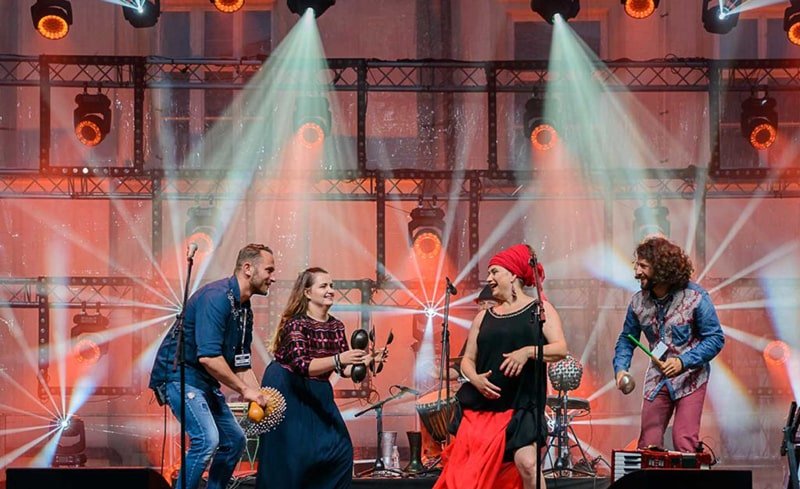 July is the month when the Rialto Theatre in Limassol hosts performances by bands and musicians from all over the world during the Cyprus Rialto World Music Festival. This July sees the 13th edition of the festival and it promises to do what it does every year; entertain us with an array of musical traditions.

The festival has become a bridge between different traditions, each of its various incarnations presenting musicians who have common starting points and influences, drawing their inspiration from the tradition of each country as well as Cyprus.

Ethno Cyprus, the traditional-music camp with around 40 young traditional-instrument artists from European and Arab countries participating, will open the festival on Tuesday. The music camp, which is organised by the Euro-Arab Youth Music Centre, will perform a sample of their joint work, combining the musical traditions of the various Mediterranean countries.

The music will flow freely on July 12 when the Fourth Moon quartet will take to the stage. The programme will consist of original songs, entirely composed and arranged by the members of the band. The quartet is made up of musicians from Scotland, Italy, Austria and France, and their music is rooted in Scottish and Irish musical tradition. However, the music develops to include classical and jazz influences, and creates a unique and catchy sound.

Next up we will hear the very familiar sounds of Monsieur Doumani on July 16. The local band has been sharing its Cypriot-dialect songs, which are influenced by contemporary Cypriot society, with us since 2011. Over these eight years the three-member band has been very successful. Antonis Antoniou, Angelos Ionas and Demetris Yiasemides have recently come back from a European tour of their latest album Angathin (‘Thorn’). The album, which was released last February, was in the Top 10 of the Transglobal World Music Chart for three months, reaching the number one spot last April. It was also given the title of Top of the World album by the British magazine Songlines.

Next up on July 17 will be the Polish band Dikanda. The band members draw their musical inspiration from traditional folk sounds of the broadly defined Orient – from the Balkans, Israel, Kurdistan and Belarus, all the way to India. Their works are dominated by Balkan and Gypsy influences, and what distinguishes their lyrics is the creation of new words, which may be said to be their very own language. The band has been playing since 1997 and has recorded seven albums so far.

The woman who is known as one of the most charismatic female performers on the current world-music circuit will be up next on July 19. Mercedes Peon will introduce us to the musical melodies of Galicia. Her compositions, making use of ancient rhythmic motifs and having a polyrhythmic style, create a special atmosphere full of energy, with an electro-acoustic complexion, in which she leaves her own personal mark.

For the very first time, the Nicolas Tryfonos Quintet will also perform at the festival, on July 23. The group will present original compositions and melodies orchestrated in its style, which is traversed by the paths of jazz art and the traditional music of the Eastern Mediterranean and the Balkans.

Last up, on July 26, will be the band Macumba, who will present their own authentic compositions and arrangements, inspired by the Latin-jazz and world-music scenes. Macumba was formed soon after Chilean bassist Rodrigo Caceres came to Cyprus and met Rodos Panagiotou (drummer and percussionist), George Morfitis (keyboard player) and Elias Ioannou (trumpet player), all of whom were already well known on the local Latin-jazz scene. Together, the four musicians started to experiment with sound, and the process has never stopped.