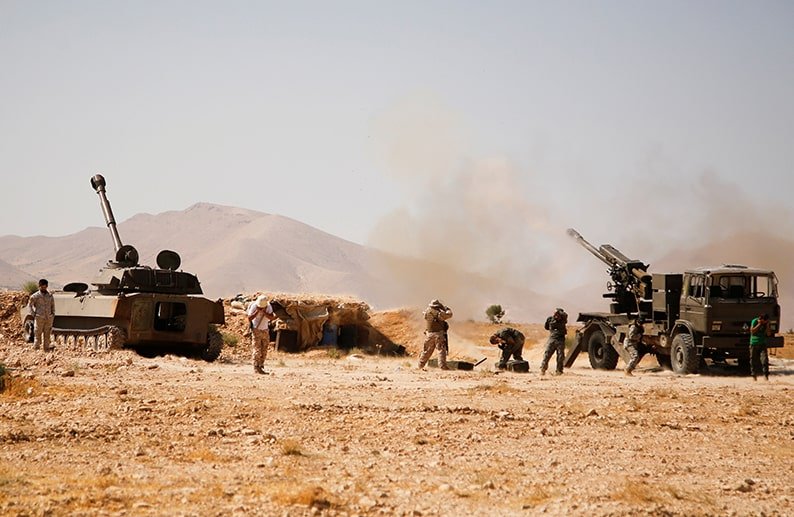 Hezbollah is helping to lead a Russian-backed offensive in southern Syria, pro-Damascus sources said, exposing the limits of US policy that hopes Moscow can get Iran and groups it backs out of the country.

Hezbollah‘s role in the offensive near the border with Jordan and the Israeli-occupied Golan Heights has also defied Israeli demands that Iranian proxies be kept away from its frontier – a fault line of the decades-old Arab-Israeli conflict.

“Hezbollah is a fundamental participant in planning and directing this battle,” a commander in the regional alliance that backs Damascus told Reuters. “Everyone knows this – the Israeli enemy, friends, and even the Russians.”

But the Iranian-backed group is keeping a lower profile than in past Syria campaigns, acknowledging the risks of Israeli escalation.

A senior official in the regional alliance that backs Assad said Hezbollah was fighting “under the cover” of the Syrian army in the south. A European diplomat said Iranian-backed forces were not thought to be taking part “in strength”.

For Assad, the campaign holds out the prospect of reopening a vital trade artery to Jordan, reestablishing his control over the Golan frontier, and crushing rebels once deemed a threat because of their proximity to Damascus.

The offensive has yet to face resistance from Assad’s Western, Israeli or Arab foes. Washington has told rebels it once backed not to expect intervention. Some have surrendered.

Politically, the campaign has been one of the most complex yet for Assad. Israel has been pressing his Russian allies to keep Iranian-backed forces away from its frontier. Israel also wants them removed from Syria more widely, echoing Washington.

Recent Russian calls for non-Syrian forces to leave the south have been seen as partly directed at Iranian-backed forces.

“There are possibilities for doing a larger negotiation on helping to get Iranian forces out of Syria and back into Iran, which would be a significant step forward,” Bolton told CBS News “Face the Nation”.

Seven years into the war which has killed hundreds of thousands of people, Assad now commands most of Syria with his allies’ help, though most of the north and a chunk of the east remains out of his hands. The presence of Turkish and US forces in those areas will complicate further gains.

As Assad seeks military victory, there seems little hope of a negotiated peace, with some 6 million Syrians abroad as refugees and 6.5 million more internally displaced. The southwest offensive has uprooted 270,000 people.

Support from Iran and Hezbollah helped Assad survive rebel advances and plug manpower gaps early on, and then win back territory once Russia’s air force arrived to help in 2015.

Iranian-backed Shi’ite militias have also been seen as critical in holding territory. On the ground, Russia has deployed some regular forces, military police and private contractors.

While Iran and Russia have worked closely together, differences have surfaced recently.

Notably, tension flared last month when Russian forces arrived unannounced in an area ofHezbollah deployment near the Lebanese border. The Russians withdrew the next day.

The official in the pro-Assad alliance said the United States appeared to be hoping to “substitute” Iranian influence with Russian influence, but this would be futile. Russia and Iran have an “understanding” in Syria, the official added.

“The battlefield situation in Syria will not be reversed. The regime and its allies have very wide control,” the official said. Assad has said Hezbollah and other allies will stay a long time.

Excluding Iran and Hezbollah from the southwest was one objective of contacts between the United States, Russia, Israel and Jordan that had sought – unsuccessfully – to stave off a government offensive, the European diplomat said.

“I suspect that a few Iranians will not cause the Israelis too much concern, but larger numbers of Iranians or Hezbollah would,” the diplomat said. Israel was “broadly comfortable” with the Syrian army returning to the Golan frontier as long as groups such as Hezbollah stay away.

“I think the Israelis are reasonably comfortable and confident that they can continue to deter and enforce and agree an arrangement that keeps Iran away from the Golan at the moment,” the diplomat added.

The temperature may however rise as the offensive moves from Deraa province towards Quneitra on the Golan, where tensions between Israel and Iran sparked a military confrontation in May. Israel beefed up its tank and artillery deployment on the Golan on Sunday.