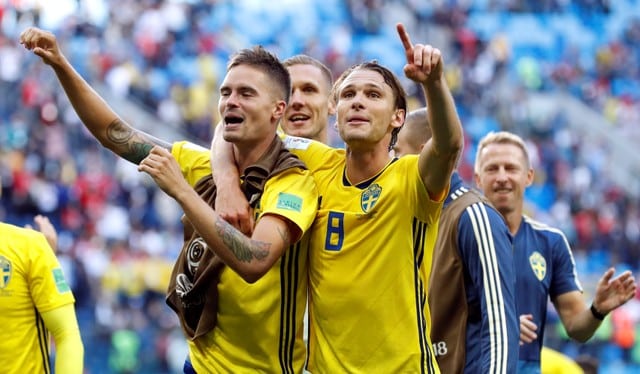 England booked their place in the last eight by edging past Colombia in a penalty shootout on Tuesday to raise hopes of a first World Cup title since 1966.

“It would be easier for England to beat Brazil than to beat Sweden in my opinion, Sweden today are a very hard team to break down,” Swede Eriksson, who led England to the 2002 and 2006 World Cup quarter-finals, told Paddy Power News.

“England have a great chance to make a World Cup semi-final. But, if anyone in the squad thinks they have an easy game on Saturday, they’re wrong.

“It’ll be the most difficult game they’ll have played so far, they can bet on that.”

Sweden reached the World Cup last eight for the first time since finishing third in 1994 after a scrappy 1-0 victory over Switzerland on Tuesday.

“Sweden are so difficult to break down. They are very solid and really tough. If you woke them up in the middle of the night, they would know every position in defending – any possibility in the game, they know what to do.

“Their strikers are defenders when it’s time to defend and they can defend in their own box as well.

“During my time with England we met them four times. We lost once, and the others were a draw and, going back before that, Sweden have beaten England in big games. My brain says England, though my heart says Sweden.”

England had never won a penalty shootout at the World Cup before Tuesday and Eriksson believes overcoming that barrier will prove to be a big boost in the latter stages of the tournament.

“Everyone gets worried when a game goes to penalties, and with the record England have in competitions, it’s huge in England that they’ve managed to win the shootout here… it’s great for confidence because of England’s history,” he said.

Gareth Southgate’s England side face Sweden in Samara on Saturday.

Merkel ready to back lower EU tariffs on US cars