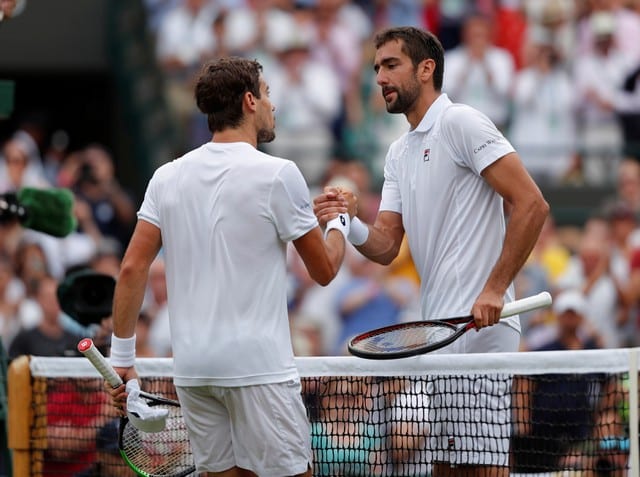 The Croatian third seed began the day two sets up but 4-3 down on Pella’s serve in the third, following Wednesday evening’s halt for rain and found his opponent very much up for the fight.

Pella wrapped up the third set comfortably, then shaded an exciting fourth set that included two breaks of serve for each player with Pella taking command in the tiebreak to clinch it 7-3.

The deciding set went with serve until Pella clinched it on his fourth match point after Cilic had already saved two in the 10th game and another when 30-40 down.

Pella, who has very limited experience on grass and had lost to Cilic in three sets at the 2015 U.S. Open in their only previous meeting, was undoubtedly helped by Wednesday’s rain interruptions.

“Yesterday he was playing so, so good, hitting the ball so hard that I couldn’t do anything,” Pella said.

“So the rain helped me a lot. Today I played differently, tried to be more aggressive, he started to feel uncomfortable. I tried to hit the ball hard and fight for every ball and I think in the end that’s why I won.

“Every time you play this kind of player, they try to break your serve in the first game and that’s what he got in the first two sets.”

Pella said grass was not his favourite surface but he was trying to improve.

“The rain came and today I felt much more confident, served better and was so calm until the end. I lost three or four match points before I could close the game, so I am very happy.”

The signs were immediate that Thursday’s play would be different as Cilic looked uncomfortable trying to find his length and perhaps ruminating that the weather had denied him a simple win the previous day.

The fourth set was key for Pella as he made Cilic work hard for every point and varied his serve to keep Cilic guessing.

Cilic broke to take a 3-1 lead, only for Pella to break back, chasing and retrieving a cheeky drop shot from the Croatian to beat him at the net.

Then it was Pella’s turn as Cilic double faulted then fell to some fine recovery shots by the Argentine, one across court, the other kissing the line.

But Cilic broke back and saw the set through to a tiebreak in which he took a 2-0 lead before Pella, playing superbly, reeled off five successive points to give himself four set points with Cilic managing to save only the first with an ace.

Teachers’ unions to meet over changes in work hours (Update 1)