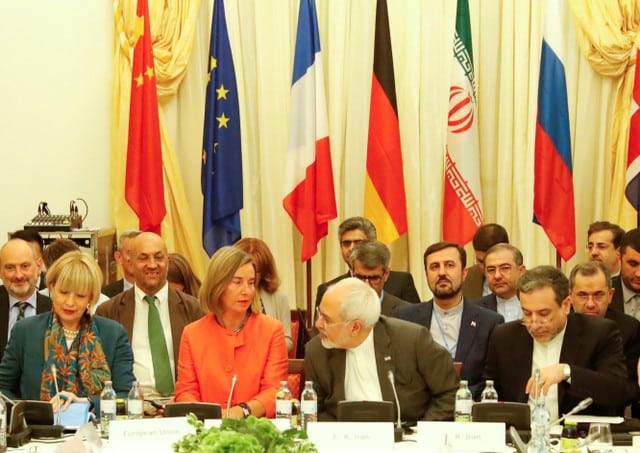 Talks to save the 2015 nuclear deal on Friday are unlikely to satisfy Iran, European powers said, and Tehran warned that it could leave the accord if it was not fully compensated for the re-imposition of US sanctions.

Ministers from Britain, China, France, Germany and Russia meet their Iranian counterpart in Vienna for the first time since US President Donald Trump left the pact in May, but diplomats see limited scope for salvaging it.

Trump pulled the United States out of the multinational deal under which sanctions on Iran were lifted in return for curbs on its nuclear programme verified by the International Atomic Energy Agency (IAEA). Washington has since told countries they must stop buying the OPEC producer’s oil from Nov 4 or face financial consequences.

Speaking on French radio ahead of arriving in the Austrian capital, France’s foreign minister said world powers would struggle to put together an economic package immediately.

“They (Iran) must stop threatening to break their commitments to the nuclear deal,” Jean-Yves Le Drian said. “We are trying to do it (economic package) before sanctions are imposed at the start of August and then the next set of sanctions in November. For August it seems a bit short, but we are trying to do it by November,” he said.

On arrival in Vienna, Germany’s Foreign Minister Heiko Mass said he didn’t expect a collapse of talks, but suggested more negotiations would be needed in the future. He stressed hat world powers would struggle to compensate Tehran for companies leaving Iran.

The pillars of the European Union’s strategy are: European Investment Bank lending, a special measure to shield EU companies from US secondary sanctions, and a Commission proposal that EU governments make direct money transfers to Iran‘s central bank to avoid US penalties.

“We’ve made some progress, including on safeguarding some crude (oil) sales, but it’s unlikely to meet Iranian expectations. It’s also not just about what the Europeans can do, but also how the Chinese, Russians, Indians, others can contribute,” said a senior European diplomat.

Iranian officials have said that key for them is to ensure measures that guarantee oil exports do not halt, and that Tehran still has access to the SWIFT international bank payments messaging system or an alternative.

“We are ready for all possible scenarios … the collapse of the deal will increase the tension in the region. To save the deal, other signatories should compensate for US sanctions,” a senior Iranian official told Reuters on Friday.

During a visit to Europe this week President Hassan Rouhani warned that Iran could reduce its co-operation with the UN nuclear watchdog, having already threatened Trump of the “consequences” of fresh sanctions against Iranian oil sales.

Iran‘s Revolutionary Guards have also warned that they may block oil shipments through the Strait of Hormuz in response to US calls to ban all Iranian oil exports.

“We expect our partners to give us verifiable solutions rather than just promises,” Iran‘s Foreign Minister Mohammad Javad Zarif told reporters on Friday.

Anthony Bourdain’s daughter to inherit majority of his fortune

A new casino coming to Cyprus