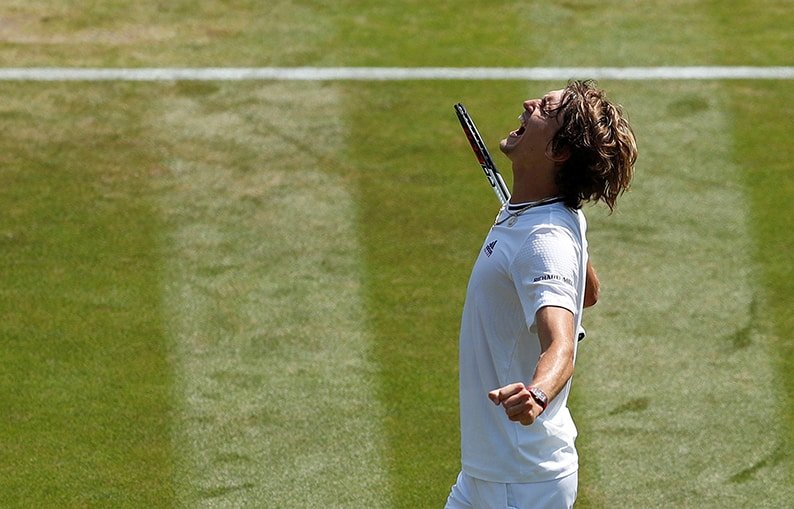 Fourth seed Alexander Zverev reached the third round at Wimbledon for the third year in succession when he came from 2-1 down to complete a 6-4 5-7 6-7(0) 6-1 6-2 victory over Taylor Fritz in their suspended match on Friday.

The second-round clash on Court One, which lasted three hours 12 minutes, was suspended on Thursday evening in fading light with the 20-year-old American Fritz leading 2-1 after taking a 56-minute third set.

It was the fourth time in six Grand Slam matches that the 21-year-old German had come back from 2-1 down to win a five-setter, after three at the French Open.

World number three Zverev said he had struggled with a stomach virus and the fading light on Thursday.

“Yesterday was tough for several reasons, I had a stomach virus, went to bathroom at the end of the second set and threw up, and last night I didn’t eat anything,” he said.

“It’s a closed court… We played in dark for an hour. I was missing balls I usually don’t miss. It helped me we stopped at the third. We were both struggling to be honest, it helped him to reach the tiebreak.”

As the match looked to be going into a second day, Fritz slipped and fell twice when 6-5 up in the third set, missing the chance to break Zverev’s serve and clinch it before the tiebreak.

But the 68th-ranked American was on a roll and took command of the tiebreak from the start, running out a 7-0 winner.

Zverev said he was returning much harder on Friday, rushing Fritz and giving him less time to react. “I was seeing the ball much better.”

He added that wearing contact lenses was not an issue. “I feel 100 percent comfortable with contacts. I love playing night sessions.”

Determined not to make an early exit in a tournament where he reached the fourth round a year ago — bettered in Grand Slams only by his quarter-final in Paris this year — Zverev came out guns blazing on Friday and powered Fritz into submission.

The American had his moments, such as a sublime lob, and the better of numerous baseline rallies.

But Zverev, serving better and sharper in finding the lines and length, stifled Fritz’s efforts to regain the advantage he had held on Thursday.