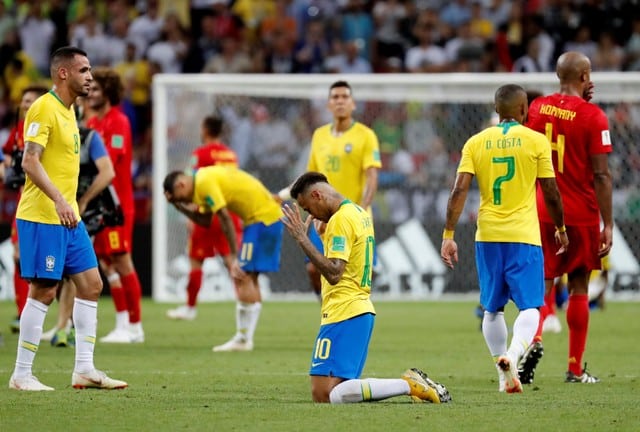 Chance was not on Brazil’s side in painful defeat, says Tite
KAZAN, Russia, July 6 (Reuters) – Brazil coach Tite felt a terrible bitterness after they were knocked out of the World Cup by Belgium in the quarter-finals on Friday and said his side never got the breaks in an enthralling end-to-end contest.

Fernandinho put Belgium ahead with an own goal when the ball came off his shoulder from a corner after 13 minutes before Kevin De Bruyne hammered home a second just past the half-hour.

Brazil substitute Renato Augusto reduce the deficit after 76 minutes with a fine header but although Tite’s team piled on the pressure they could not get an equaliser and Belgium now go through to the semi-finals to play France.

Brazil were every bit Belgium’s equal and had chances to score, hitting the woodwork early on through Thiago Silva and forcing Thibaut Courtois to make several great saves.

Brazil’s coach, though, made no excuses, even as he said luck was not on their side.

“Football has a randomness but I don’t like to talk about luck,” he said. “When it is on our side it is a polite way of putting down the opponent. So I don’t believe in luck. Was Courtois lucky? No, he was great. It hit the woodwork, what can you do. Belgium were competent and effective.

“Randomness, accidents, they happen. And today they happened. It hurts to say that. That is not to undermine Belgium, who are a great team. But chance was cruel to us. It was so hard and it is very hard to accept.”

The defeat was Tite’s first in a competitive match since he took over in mid-2016 and only his second defeat overall. It was also the first time his side had allowed two goals in a game after conceding only six in their previous 25 matches.

Yet Brazil were the dominant team for much of the game, and especially in the second half when substitutes Douglas Costa and Renato Augusto ran at the Belgium defence.

Tite, though, praised their opponents – who had eight shots at goal to Brazil’s 26 – for their superior finishing.

“We had the upper hand for two-thirds of the game, a very high quality game,” he said. “Belgium turned their chances into goals. It’s very difficult to say this but it was a great game. Two very impressive teams technically.”

“With all this pain that I am feeling, this bitterness, it is difficult to talk, but those who like football took great pleasure in watching this game. What a game it was.”

Estia debacle: how the taxpayer became the bad loan guarantor