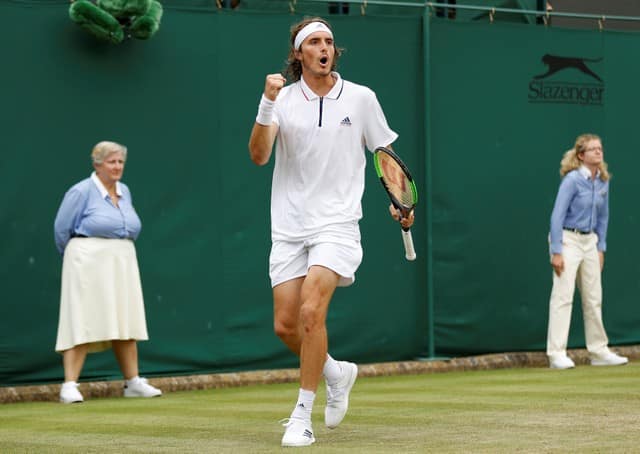 Teenager Stefanos Tsitsipas became the first Greek man to reach the last 16 of a Grand Slam tournament in the professional era when he outclassed Italian qualifier Thomas Fabbiano on Friday.

The 31st seed has become a hit with fans at the All England Club due to his dynamic style and he was impressive again during a 6-2 6-1 6-4 victory in Athenian-type temperatures.

Before this year Tsitsipas, whose mother is a former top Russian tennis player and whose father packed in his job to coach him, had never won a Grand Slam match.

But he has rocketed up the rankings and is already the first Greek to crack the top 100 in the ATP rankings.

“It’s amazing. It’s an amazing feeling, and I feel very proud that I represent Greece and that all of my hard work has paid off,” the 19-year-old, who will play big-serving American John Isner on Monday, told reporters.

“I feel extremely proud that I can be the first Greek in the Open era in the fourth round of a Grand Slam.”

Tsitsipas is part of the ATP’s Next Gen — the young guns led by Alexander Zverev who are expected to be challenging for Grand Slam titles in the not-too-distant future.

Blessed with great athleticism and power and a silky one-handed backhand, Tsitsipas looks to have all the tools to continue the remarkable progress which has seen him rise from 94th to 35th in the rankings in little more than six months.

His performances so far have even drawn comparisons with German great Boris Becker — chiefly because of his love of diving full-length for volleys on the grass.

One such point during his five-set win over American Jared Donaldson in the second round proved a hit on social media.

“When I step out on the court, it’s not a priority for me to do a diving shot during the match,” he said. “It’s not on my mind. It just comes at a certain moment, a crucial moment where I really need the point, and the only solution is to dive.”

After playing for three consecutive days — his match with Donaldson spanned two days — Tsitsipas now has a weekend off.

He said he will be hard at work practising, trying to keep the rhythm he has established, but when he gets back to his rented accommodation in leafy Wimbledon village he will relax by catching up on some movies.

“It’s a better atmosphere than the other Grand Slams. I feel a bit more like this home environment more,” he said.

“I’m staying in a nice house this week. Apparently the guy who owns the house has a massive collection of DVDs and movies.

“So I’m watching a different movie every single day.”

As stories go, Tsitsipas’s is already a good one and who knows where it will end up next week.

Luck was not on Brazil’s side in painful defeat, says Tite