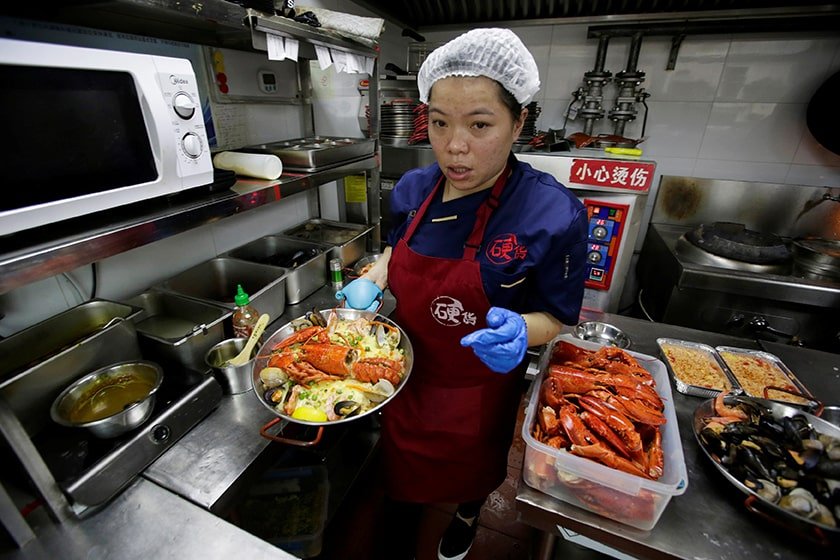 A cook makes a lunch of lobster, that was imported from Boston, U.S., at the kitchen of a sea food restaurant in Beijing, China July 5, 2018. Picture taken July 5, 2018. REUTERS/Jason Lee

There was a very sound reason trade wars went out of fashion. They were not good for peace

The United States could probably extract major concessions from China in a carefully managed confrontation on trading issues because the Chinese don’t want a trade war with their best export customer. But the US can’t win the trade war that Donald Trump is planning to wage, and it kicked off on Friday.

That’s when the first chunk of Trump’s new tariffs on Chinese exports to the United States – a 25 per cent import tax on $50 billion of Chinese goods – actually goes into effect, and Beijing retaliates with similar tariffs on $50 billion of American exports to China. That’s just a drop in the bucket in terms of the size of either economy, but it’s also just the opening salvo in the war.

Trump has already said that Chinese retaliation would be ‘unfair’ and that if China goes ahead he will slap a 10 per cent levy on an additional $200bn of Chinese goods. (He subsequently reduced that amount to $100 billion, but who knows?) And China has already said that it would respond with measures of a “corresponding number and quality” if the US goes ahead with that.

This is where the real tit-for-tat escalation starts, and it’s hard to see how it can be stopped. Trump is trapped by his own pugnacious rhetoric, and China’s President Xi Jinping is trapped in two ways.

One is that Trump has already imposed big new tariffs on exports to the United States by the European Union and by America’s closest neighbours, Canada and Mexico. They have all responded by imposing similar tariffs on American exports of equal value.

Xi can hardly do less, even if China’s real interests might be better served by not responding in kind to the new US tariffs. He would not wish to be seen as weaker than Justin Trudeau.

On June 21 in Beijing, according to the Wall Street Journal, President Xi Jinping met a group of chief executives of American and European multinationals and assured them that China would definitely strike back at US trade tariffs.

“In the West, you have the notion that if somebody hits you on the left cheek, you turn the other cheek,” Xi reportedly said. “In our culture, we push back.”

The other factor weighing on Xi’s decisions is that Beijing is starting to see American trade policy as part of a deliberate attempt to stop China’s emergence as a great industrial and technological power and a real peer rival to the United States. After all, there are undoubtedly people in Washington who would like to do exactly that.

Trump himself does not think in geo-strategic terms, but the Chinese may well see his actions on trade as inspired by those who do. If they come to that conclusion, their willingness to go all the way in a trade war may be greater than the financial experts think it is.

China’s exports to the United States amount to about 40 per cent of its total exports, whereas only five per cent of US exports go to China, so an all-out trade war between the two countries would obviously hurt China more. President Xi, however, is far more able to ignore the resultant job losses and higher prices than Trump is – especially because the Americans who were hurting worst would be his own political ‘base’.

Or, alternatively, China’s heavily indebted economy may turn out to be even more fragile than it looks – in which case a trade war could drive the country into a deep recession (with unpredictable political consequences at home), and drag the whole world economy down with it. That wouldn’t be much fun either.

There’s a reason that trade wars went out of fashion after the Second World War, and it wasn’t just because international trade tends to enhance prosperity overall. Back when trade wars were the normal way of doing business internationally, in the 16th-19th centuries, the European powers spent almost half their time at war.

The first great era of free trade, circa 1870-1914, was also the ‘Long Peace’, when no European great power fought any other for almost half a century. That peace was destroyed by the First World War (so free trade does not prevent all wars), but the trade wars of the 1930s certainly deepened the Great Depression and facilitated the rise of fascism and a second world war.

And then came the Second Long Peace, from 1945 to the present, when once again free trade (or at least free-ish trade) reigns and the great powers never fight one another directly.

I’m not saying that Trump’s assault on free trade is going to lead us back down the path to great-power war again. Many other factors go into making such a catastrophe possible. But he may be putting one of the key factors back into place.

No to former sex offenders driving taxis or buses

The EU’s role in cutting an unwelcome umbilical cord