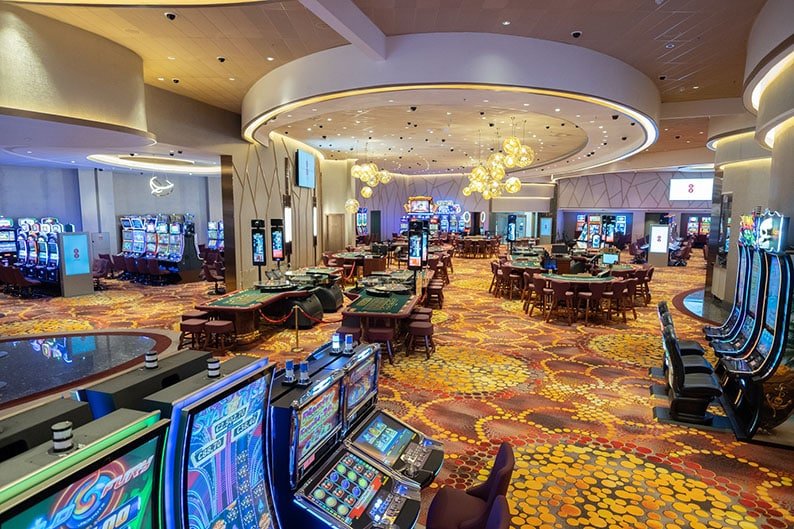 Over 7,000 people have already visited C2, but owners are aware of future challenges

It is just over a week since Cyprus’ first legal casino began operations and although it has attracted thousands more people than the company anticipated, challenges remain.

The casino – albeit a temporary one – is located just a stone’s throw away from Limassol’s My Mall on Franklin Roosevelt Avenue in Zakaki.

Aptly named ‘Cyprus Casino’ or ‘C2’, it is just a temporary taster for Melco’s fully fledged integrated €550 million casino resort City of Dreams Mediterranean which is due to open in 2021.

The temporary Cyprus Casino began operating on June 28, and over its first weekend, more than 2,000 people were coming in per day, with staff dealing with more visitors than they had expected.

“There were a lot of people we expected and some we didn’t,” the casino’s property president Craig Ballantyne told the Sunday Mail.

Many of the weekend visitors, Ballantyne said, came out of curiosity and interest.

So far, there have been 7,000 unique guests – not repeat guests – and just over 4,000 have joined the casino’s rewards club.

The most popular visitors have been Cypriots, followed by those from Greece, Ukraine, Russia, UK, Italy and Lebanon, in that order.

“It’s been quite a mix,” Ballantyne said.

Commenting on the first week of operations, he told the Sunday Mail: “it has been a real rollercoaster ride. From the plain perspective, it’s been a bit of fun but it’s below expectations I have to say that. We’re not the only game in town and we never have been, never will be.”

Though Ballantyne was careful with his wording it is clear that the competition from the north and illegal casinos operating across the country are proving to be a challenge.

“With a customer, it’s all about choice – you cannot insist they go anywhere with their disposable income. You cannot twist their arm. It’s all about the offer.”

There are about 30 casinos in the north, Ballantyne said, which operate quite professionally “but they give everything free. They give alcohol free, they give cigarettes and tobacco free, just about everything and anything.

“But they don’t have the same regulations as we do so it’s not a level playing field.”

Ballantyne said, however, it is still early days and this is a learning curve, both for the government, and company as well as the regulators. Though for Melco, the learning curve is fast: they’ve had plenty of experience.

Currently, they are in discussions with authorities to try and relax the regulations that are sometimes a little discriminatory, according to Ballantyne.

For instance, when it comes to advertising, the regulations clearly stipulate gaming cannot be advertised distastefully or in a way that might encourage anyone to play with the idea that it would give them a life-changing opportunity.

Life changing would be for instance suggesting that €5 could get someone €5m.

“We wouldn’t want to do that,” said Ballantyne. “But then you’ve got Lotto advertising on TV every night and you’ve got Opap advertising the Joker every day on every shop window in every street and every corner at €1.4m or €2.4m so I kind of find that a little bit discriminatory.”

The company obviously wants a return on investment but they know that is a long-term strategy where the key lies in the luxury integrated casino resort, the property president added.

Linked to the main operation is a series of small satellite or ‘pop-up’ casinos around the island. The company is confident about their success, though the Nicosia one’s proximity to casinos in the north could pose another challenge for the company.

Although this is the first legal casino to open in Cyprus, Ballantyne commented: “this is a mature market.”

So, what did the punters think?

One middle-aged Cypriot woman who didn’t want to share her name had spent quite some time at a slot machine waiting to win.

Too concentrated on the game to say much, she said it was the first time she had ever gone to a casino. She had lost €100 but wasn’t prepared to stop until she won.

A Lebanese punter, fixated on his screen, said he found the temporary casino “meh. It’s not designed to let you win, it’s all psychological. No one ever wins.”

Exiting the premises, another Greek Cypriot was a lot more impressed. “It’s nice, it’s the second time I’ve been here since it’s opened. I lost €100 today…last time I won €200,” he said.

He said it was the first time he had visited legal gaming premises.

The most popular games are easily the slot machines Ballantyne said.

What they have on offer is what they’ve gleaned from the competitive marketplace – northern Cyprus, Greece, Lebanon, and Egypt – with a mix of roulette, blackjack, poker, Russian poker.

“I think we did it quite well although there are a couple of games we might turn around and swap around” for instance more baccarat but high end, which customers have requested in the past week.

Currently, low-end baccarat is available but Ballantyne stipulates much of what is and what will be available is supply oriented.

Peak times are on average between 8pm and 2am or 3am on a weekend.

Visitors have so far been well behaved though there have been a few cases where people have been asked to leave.

Security is obviously a serious concern in such a highly charged environment but many of the almost 600 staff members have worked in other Melco casinos across the world.

Some of them have come directly from Macau, where Melco has huge operations, and many used to be in Thessaloniki thus coming in with plenty of experience.

Kelly Nikolaou, a hostess at the Columbia Bistro restaurant at the Limassol casino used to work at a casino in Greece. Many of her colleagues were also colleagues in Thessaloniki highlighting the feel of a big global company.

Nikolaou said she absolutely loved working at the Limassol casino, the coastal city reminding her of Thessaloniki’s beaches. She had a stint working in Cyprus about 16 years ago but coming back, Limassol bears no resemblance.

“Before, it was like a small village. But now after coming back with all these high-rise buildings, I see it like a mini-Dubai.”

Earlier this week, the national betting authority announced a gaming campaign running from July 2018 to June 2019.

Named ‘thoughts’, it aims to target people under the age of 18, pathological players, gamers not deemed at risk, and those with potential symptoms of problematic behaviour. Vulnerable groups and elderly people as well family and friends of gamblers are also some of the intended targets for the campaign.

It aims to encourage five thoughts people should keep in mind when gambling. 1) Learn before you play, 2) put limits, 3) self-evaluate, 4) deal with the problem courageously and 5) it’s a game, don’t forget that