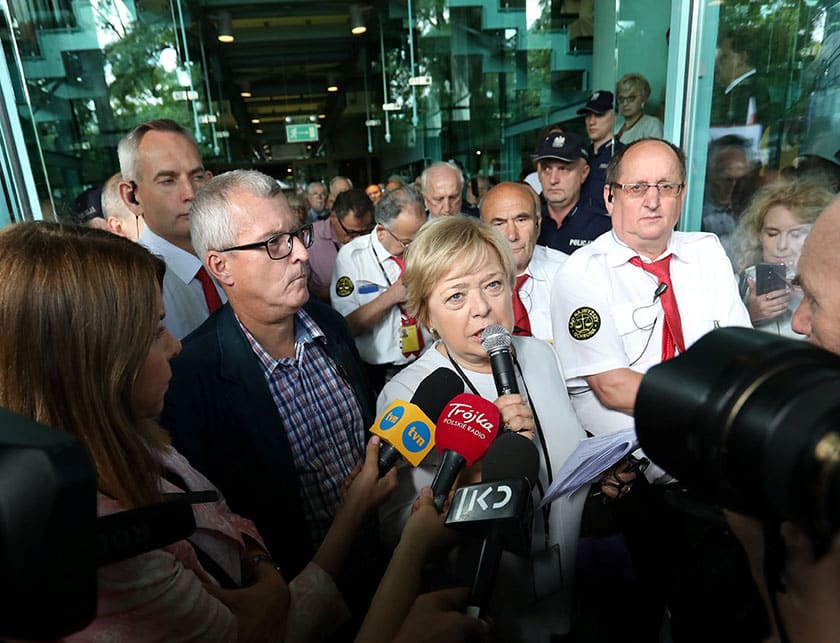 Supreme Court President Malgorzata Gersdorf talks to the media at the Supreme Court building, in Warsaw, Poland July 4, 2018. Agencja Gazeta/Slawomir Kaminski via REUTERS ?ATTENTION EDITORS - THIS IMAGE WAS PROVIDED BY A THIRD PARTY. POLAND OUT. NO COMMERCIAL OR EDITORIAL SALES IN POLAND.

Some East European countries that joined the EU in 2004 were not really fit to join an association of liberal democracies so soon after the dictatorial rule of the totalitarian regimes that shaped their societies, and their unsuitability is beginning to jar with the civilised values on which the EU is founded.

Angela Merkel, the German chancellor had to remind Viktor Orban, the Hungarian prime minister, that ‘the soul of Europe is humanity’ while the European Commission is taking legal action against Poland for passing a law to compel the early retirement of a number of its supreme court judges, including the chief justice, on the grounds that it undermines the independence of the judiciary and the rule of law.

The problem is that the former totalitarian states of East Europe did not go through the same social and political transformation the rest of Europe had undergone after World War II that made for the civilised, humane society, free of all forms of discrimination on grounds of race, gender and sexual orientation, that we know and love in western Europe.

East Europe missed out on this transformation and is now resisting its impact by voting in regimes that reflect a set of values the EU was set up to prevent from gaining political purchase in Europe ever again. Even in East Germany, where Angela Merkel grew up, the ugly face of backward racist populism is enjoying a revival that is beginning to infect the rest of Germany that would have been unthinkable before reunification. This has now spread to Austria and Italy both of which have a shameful history for which, unlike Germany, they have done no penitence.

The absorption of East Germany into the Federal Republic was the first step of an ill-conceived rush to absorb east Europe into the EU on the back of a strategic decision to anchor the former Soviet satellite states into the EU to fend off a resurgent Russia – invigorated under Vladimir Putin from the nightmare years of Boris Yeltsin. The stupid attempt to do the same in Ukraine backfired spectacularly when Russia annexed Crimea and intervened in Syria. The EU’s meddling in Ukraine was a provocation too far and it spurred Russia to fight back.

Russia was left no breathing space – states that were formerly her bulwark against attack were either absorbed into the new super state of Europe or into Nato or both. There is some evidence to suggest that Russia is fomenting the right-wing populism that has gripped Europe of late and may even have influenced the Brexit referendum. Populist politicians like Marine Le Pen and Viktor Orban are on excellent terms with President Vladimir Putin of Russia. And all this is down to the arrogance of Nato and the EU in disrespecting the geopolitical importance of Russia after the collapse of the Soviet Union.

The crisis in Poland, however, is different because Russia and the Russians are loathed in Poland. The crisis in Poland is domestic and that has all the hallmarks of political inexperience – a complete lack of political nous. Poland was politically and socially too backward to join an association of liberal democracies such as the EU but no one was prepared to say so because she was a bit spoilt by the West. The Poles, like other east Europeans, had no experience of liberal democracy, no experience of legislative accountability, no experience of judicial independence and, despite being an observant Catholic country, they did no penance for the sins of their past.

The attempt by the government of Poland to remove the chief justice by the expedient of changing the age of retirement to 65 and her refusal to accept the change as unconstitutional is not just undignified. To the eyes of judges of common law countries like Britain and Cyprus, where the independence of judges is sacrosanct, it is sacrilege.

Recently in Cyprus, the president gave good character evidence for his deputy attorney general at his criminal trial but the judges who heard the case convicted him regardless and he was sent to prison. This would not happen in countries where the judiciary is not independent.

As for the Polish government’s claim that 65 is the normal age of retirement for those in government service, judges are the exception that proves the rule because the rule applies to those in the service of the government, which judges are most definitely not.

There was a time in Britain not so long ago when great judges like Lord Denning were not subject to compulsory retirement – paradoxically he was forced to resign aged 83 for some racially insensitive remarks he made extrajudicially, which people of his generation thought harmless, but which were inappropriate in the mouth of the head of the civil division of the court of appeal.

In the United States, supreme court judges never retire in accordance with the well-known truth that the art of judging improves with age; it reaches its acme at about 70 where it plateaus until death or dementia. What you need in any supreme court is independence and fearlessness, and old judges have both aplenty because such attributes improve with age.

What politicians without a long experience in democracy do not know is that the executive branch of government cannot rule unless authorised by law in accordance with the principle of the rule of law that requires legal backup for all government action. Hence the need for the executive to pass laws through the legislative branch of government; and hence the need for independent judges to decide the constitutionality of laws and the legality of administrative action.

If the judiciary is not independent, the system of judicial control is corrupted and the whole system sooner or later comes crashing down. Supreme courts have to expound, interpret and apply the law in light of principle and precedent. The policy of the government of the day is obviously taken into account, but if it does not accord with basic laws, it is the duty of judges fearlessly to say so and to strike it down.

It is a heavy responsibility that is best performed by men and women of great experience who are both fearless and independent. From what I have been able to observe both as an advocate and occasionally as a judge, independence and fearlessness come with age. There are not many advantages in getting old, but if you still have all your faculties wise judgement is one of them.

I wish that the judiciary in Cyprus were allowed to remain independent of the political leadership of the two communities after they fell out in 1963. Even now it is one area where they still have the common law in common, and I can’t see why in private law at least they cannot have a unified Supreme Court.

The principle in negotiations that nothing is agreed until everything is agreed is all very well, but it should not apply to the judiciary. If the judges think a unified supreme court is in the interests of justice they should be able to set one up independently of any solution and it could operate rather like the Privy Council still does in the Commonwealth.

Attitudes to cannabis a mass of contradictions

Tales from the Coffeeshop: National problem and talking point revived by UNSG