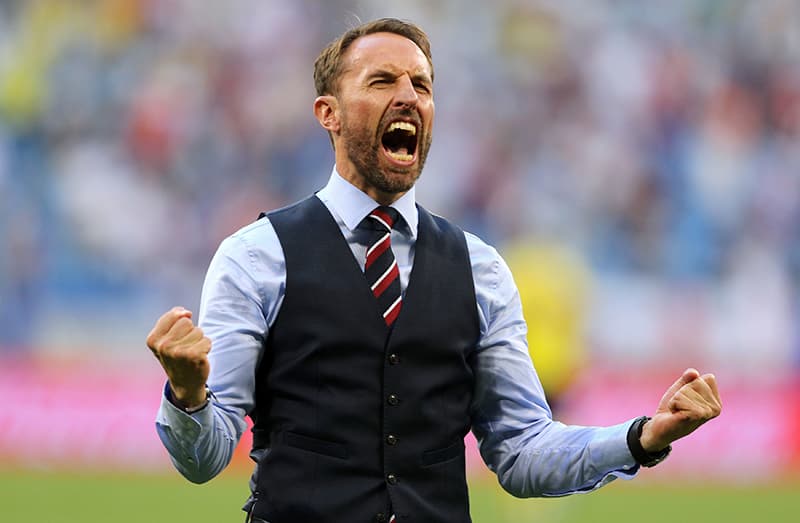 Gareth Southgate believes England could get an even bigger and crazier reception for winning the World Cup than the heroes of 1966 (Photo: Owen Humphreys/PA Wire)

Gareth Southgate believes England could get an even bigger and crazier reception for winning the World Cup than the heroes of 1966.

Fantasy is edging closer to reality in Russia as the Three Lions continue their charge towards Sunday’s final, with Croatia all that stands between them and a shot at history.

England’s stars would become immortal like Sir Alf Ramsey’s stars of 1966 and Southgate believes lifting the World Cup might be even bigger in this modern world of social media and instant connectivity.

“We’ve talked, touched briefly, certainly, on the team which won,” the England manager said. “How they’re still held and revered. At the beginning of working together with the lads and trying to sell them the vision of what’s possible, what we’re looking to achieve in the long-term.

“We also feel we’ve had events on when we’ve been in camp when some of those guys have been in, when the road was named at St George’s (Park) after Sir Alf.

“I’ve met quite a few of those players and we know exactly how they’re held and perhaps in the modern era that would be even crazier, social media and everything else, the global thing is so much bigger.”

Southgate saw the excitement and expectation that comes with reaching a semi-final during his playing days when he was part of the squad that reached the final four at Euro 96.

That tournament ended in despair for the defender after missing the crucial penalty in the shootout, so perhaps it is little wonder that the level-headed manager and “bloody proud” Englishman has got lost in some of the celebrations in Russia.

“Sadly I’ve been guilty of that as a player at my clubs,” Southgate said.

“And there’s the emotion and also the fans have paid a lot, come a long way and to be able to connect with them.

“I’d love to be able to do it with however many millions who are watching at home but the supporters who are here, they’re singing and I know what they’ve been through and I met lots of them before we came.

“We had events where I met a lot of them, they told me their stories and how many years they’ve been travelling, watching England and what it means to them.

“I only played for three clubs, I have a real affinity with all three, but England has been the biggest part of my life really.

“To be able to manage the team to this point, having played in a semi-final as well is really, really special.”

Now it is about striking a balance between cherishing the moment and keeping even-tempered as England prepare for their first World Cup semi-final since 1990.

Southgate is more interested in kicking on than wondering if they would get the kind of rapturous reception that greeted Sir Bobby Robson’s men 28 years ago, although that summer left a lasting impact on him.

“I watched it with some mates, at a mate’s house,” he said. “Like I did with most rounds, with a curry and a beer.

“I was still living in Crawley, at my parents’, I was a young pro at Palace. I would have been going back into pre-season by the end of it.

“It was a brilliant tournament, fantastic memories of the whole tournament, I remember videoing every game to watch back.

“I videoed it to look at the players, the matches and I guess as a young player you wanted to see the best players, the level they were playing and see what you could learn from it.”

Preparation for Croatia is minimal given the turnaround as recovery becomes paramount, with players balancing switching off and refocusing in remote Repino.

“They’ve been through a lot,” Southgate added. “More the other night coming into Saturday.

“But of course you get an accumulation of fatigue, through a tournament that’s why we took the decision we did against Belgium more than anything.

The Football Association confirmed on Sunday evening that England would be wearing an all-white kit in Wednesday’s match.