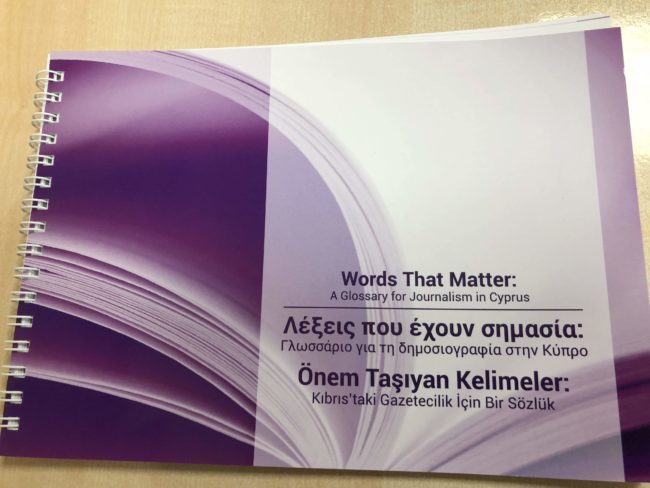 Journalists from both sides of the divide were at the Home for Cooperation in the Nicosia buffer zone on Tuesday where a glossary containing a few dozen mutually acceptable terms that can avoid inciting tension between the two sides was made public.

Under the wing of the organisation for security and co-operation in Europe (OSCE), the glossary had already hit the wrong nerve in some quarters of the media before it was even published with some journalists referring to it is a restriction on freedom of the press.

During the press conference, OSCE representative for freedom of the media Harlem Desir said the words we use to describe our world are often a reflection of our positions, and that the power of words could be used to start a war or bring peace.

“While journalists are not in charge of negotiations on the future of the island, their approach, the way they report on the situation and even the choice of words they use can have a direct effect on perception and public opinion.”

Desir stressed in his speech that the glossary is only optional, saying It does not impose anything on journalists, but serves as a platform for discussion in a newsroom.

The glossary contains a total of 56 terms considered to be offensive by either of the two sides of the divide. Most terms contain mutually acceptable alternatives while for others such as ‘pseudo state’ there was no agreed alternative.

Published in English, Greek and Turkish, it also explains why a particular term may be deemed offensive, in a bid to allow journalists to better understand the effects of their words.

For instance, ‘illegal regime’ could be replaced with ‘Turkish Cypriot administration’ and ‘occupied areas / territories’ could be changed to ‘the northern part of Cyprus’.

The phrase including the word ‘occupied’, for instance, is viewed by Turkish Cypriots as biased and politically charged “because it is often used to attack Turkey and to delegitimize the Turkish Cypriot presence in the area.”

This is because Greek Cypriots find the term ‘deeply offensive’ as there was a lot of suffering involved as a result and the operation was for them ‘by no means peaceful’.

In the Greek Cypriot media, it is common to find words like ‘occupation leader’ and the words ‘pseudo’ and ‘illegal’ attached to many nouns like parliament, minister, elections, police, ports or professor.

Though parliament could be referred to as ‘Turkish Cypriot assembly’ according to the glossary, no agreed alternatives were found for the words minister, election, police and ports.

Terms which have failed to find alternatives should not be taken as an indicator of failure, the glossary said. “What is important here is to identify where difficulties lie and to promote discussion and fresh thinking within the community of journalists.”

Desir said this is the first volume of the glossary and that there has already been talk of a second volume.

He added he was aware that some media organisations have given thought to how they might take into account other readers from the island if a reunification ever took place.

“We accept the fact that some people will not support it…it is not a magic solution,” he said.

Some journalists went to the Home for Cooperation but did not attended the press conference as a mark of protest against the glossary they say suffocates freedom of speech.

Desir thanked Germany and the Netherlands for their financial support for the project.

The glossary can be found online at https://www.osce.org/representative-on-freedom-of-media/cyprus-dialogue