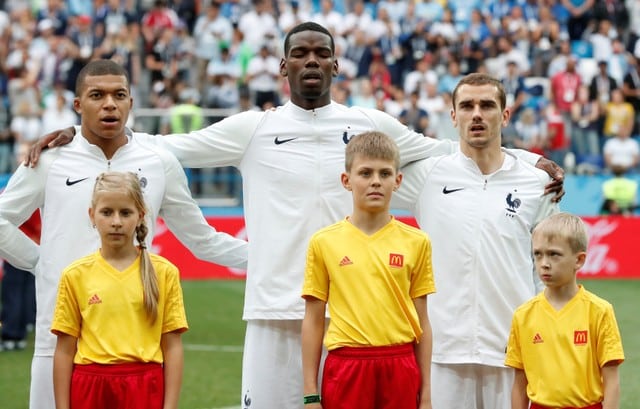 After France’s 1-0 semi-final victory over Belgium, the great Eric Cantona, in his role as Eurosport’s ‘Commissioner of Football’ started his highly entertaining rant with the following: “I once got stuck in an elevator for 90 minutes with no phone and no books. You know it was 10 times more exciting than watching France against Belgium. What an absolute stinker.”

Cantona had always stood for the flamboyant and stylish tradition of French football, which was banished from the national side more than 20 years ago, despite France producing a steady stream of some of the world’s most talented and technically gifted players. Mbappe, Griezman, Pogba are the latest batch.

With such talent in the side, fans would have expected the World Cup finalists to have shown more ambition and played more adventurously in Tuesday night’s semi-final.

Some would dismiss the after-match comments by Belgium’s goalkeeper Thibaut Courtois as the utterances of a bad loser, but he was on the same wavelength as Cantona.
He told Sporza: “France heads a corner and does nothing more than defend. I would have preferred to have lost in the quarter-finals to Brazil, at least that was a team that wanted to play football. France are just an anti-football team.”

Dismissing France as an ‘anti-football team’ was very harsh. Didier Deschamps, admittedly, is a very cautious coach, who values defensive organisation and discipline above everything else. France have many of the hallmarks of a Jose Mourinho side – very strong defensively, never taking risks and relying on counter-attacking for their goals.

The system might not provide much entertainment, but it gets results. France have made it to two finals in two years, even though the Euro 2016 final which they lost, was an appallingly poor match.

The only time France won the World Cup was on home soil in 1998, with dour, safety-first tactics, despite great players like Zidane, Henry and Djorkaeff in the side. Deschamps was also a member of the side whom Cantona disparagingly dismissed as the water-carrier.

They scored once in 240 succesive minutes of open play – a golden goal in the last minute of extra-time against Paraguay in the last 16 and beat Italy on penalties in the quarter-finals.

However, they beat a below-par Brazil 3-0 in the final, and their ultra-cautious coach Aime Jacquet stepped down, being replaced by his understudy Roger Lemerre who won the European Championship two years later with similar tactics.

This was a great disappointment for all of us older folk that fell in love with the France of the 1982-’86 period that played with flair and skill and warmed every fan’s heart.

In 1982 in Spain, the wonderful team of Platini, Giresse, Tigana and Rocheteau, having outplayed the disciplined and well-organised West Germany for 120 minutes lost on penalties, after one of the greatest acts of World Cup brutality by the German keeper, Toni Schumacher went unpunished.

Four years later, an ageing France side, led by Platini and still playing the same brand of exciting, attacking football lost in the semi-finals, again to a workmanlike West Germany.

In between, however, their attack-minded coach Michel Hidalgo was rewarded for his purist values by leading them to triumph in the 1984 European Championships. In 1986 the coach was Henri Michel.

Could you blame the French for adopting the style and tactics of Italy? Playing this rather uninspiring, ultra-cautious football has taken them to three World Cup Finals – they lost on penalties to Italy in 2006 – and they are favourites to win a second World Cup on Sunday.