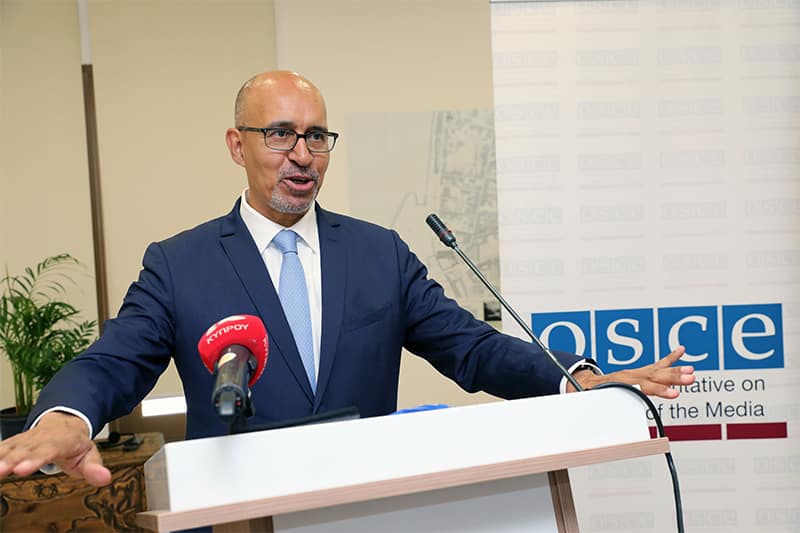 The Glossary for Journalism in Cyprus that caused an angry knee-jerk reaction by journalists and some politicians when news reports about its drafting appeared last month was presented to the media on Tuesday. Any reasonable person would find its content measured, balanced and innocuous, realising the stated objective of creating a glossary of alternative words and phrases that were acceptable to both communities.

In his forward, OSCE Representative on Freedom of the Media Harlem Desir, whose office had backed the publication, said: “In troubled times the quality of our communications and the sensitive use of language are essential to building trust… It aims to encourage sensitive communications, to promote the sharing of stories and experiences, and, eventually, to help ease tensions.”

The words and phrases proposed as alternatives to terms currently being used were put together by representatives of the Greek Cypriot and Turkish Cypriot journalists’ unions. For some words – ‘invasion’ and ‘occupation’ used by the Greek Cypriots and ‘TRNC’ used by Turkish Cypriots – the booklet noted there was “no agreed alternative.” Of the 53 words included in the booklet, there was no agreed alternative for about 13 and the Glossary’s Greek Cypriot detractors, who were outraged by the publication, will feel relieved that no alternative to words like ‘invasion’, ‘occupation’, ‘pseudo minister’, and ‘pseudo state’ were agreed.

Interestingly, the Greek Cypriots insisted that elections in the north had to be referred to as ‘illegal’ – as had to be the courts, police, ports etc – so there was no agreed alternative, but they had no objection to referring to the outcome of these ‘illegal elections’ as the ‘Turkish Cypriot Assembly’ rather than as the ‘pseudo parliament’ and the ‘Turkish Cypriot administration’ rather than the ‘pseudo government.’ The glossary did not refer to the habit of Greek Cypriot media referring to the visits of Turkish state officials to the north as ‘illegal’. On Tuesday all the CyBC’s reports referred to the illegal visit to the north by Turkey’s President Erdogan.

The Glossary was a commendable exercise as it may have made some journalists think about the words they use in reports about the other side, but we doubt it will make much difference. All those journalists that raised a fuss about it before they had even seen it, misleadingly claiming that the right to freedom of expression would be violated, would never allow it to work. Perhaps the OSCE is not aware that many journalists want to maintain a toxic climate by using language calculated to cause offence and antagonise the other side. They do not want to build trust, which is why they slammed the idea of the Glossary and are unlikely to use it.