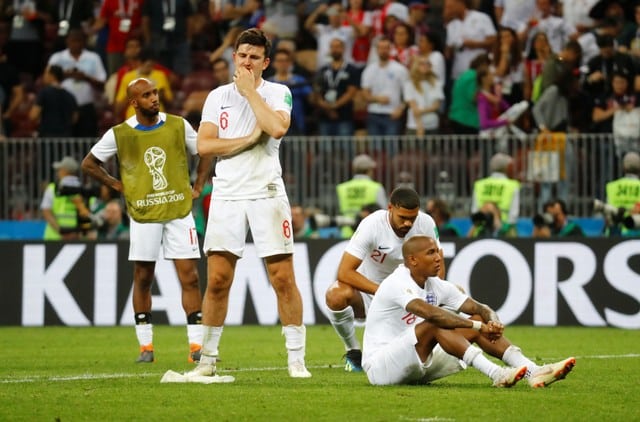 “Whenever people agree with me I always feel I must be wrong.” Oscar Wilde

I absolutely cringe when after semi-final defeat I hear Roberto Martinez say he is looking forward to playing for third place and England fans saying they are happy and proud after going out.

The people most disappointed by England’s exit appeared to be the French; defeat to Croatia was the kindest thing to happen to England as if they had made it to the final they would have been like turkeys waiting for Christmas… to be stuffed!

Adidas bowed out of the World Cup in the semis to Nike but I did warn you that if Spain or Belgium had bad games during the World Cup “It was the shirts boys!”

Now the pragmatic Gareth and cavalier Roberto can compare notes on Saturday as the ‘also rans’.
I won’t be watching that one. I watched every minute of every England game and although they converted a high percentage of free-kicks, corners and penalties, I never saw them dominate any team in any game during 90 minutes including Panama or create anywhere near enough goal-scoring opportunities from open play. They lacked ideas and personality and that worried me.

Falling over in or around the goal area to win free-kicks or penalties is not for me!

I guess it is all about mentality. If Brazil had lost in the way England did, they would have been a nation in mourning by now with the players scared to go home to their country and then we had Eric Cantona who went on record to ridicule the France team (who had won) for the way they played and their negative tactics… and England go home as heroes?

England and Belgium championed the 3-4-3 formation and both Southgate and Martinez refused to change or alter their tactics even on the verge of defeat.

Ironically France comfortably defeated Belgium by beating them at their own game, defending deep and counter-attacking on the break and Belgium had no answer whatsoever or a plan B as their ‘Golden Generation’ were made to look very ordinary and as if they had played one game too many.

Spare a thought for Martinez who although putting on a brave face, must be feeling sick at the moment as he ponders whether he got his team selection or tactics wrong and believe me there is nothing worse for a manager than his team (please forgive the gender inequality but I didn’t see any girls managing at the World Cup) not performing on the big occasion.

Worse still it will be a long time before he gets the Belgium team (if he is not sacked) back on to the pitch in a competitive match to put things right. That’s extremely painful!

Sorry Gareth, no Knighthood for now (David Beckham would have had another moan to the media about the personal injustice he had suffered) but you were a defender and sadly are no Pep Guardiola and coaching manuals cannot ever teach how to produce a Zinedine Zidane or a Luka Modric or a Lionel Messi or a Philippe Coutinho or an Eric Cantona.

There is a winning mentality and formula which Sir Alex Ferguson, Pep Guardiola, Jose Mourinho, Antonio Conte and Carlo Ancelotti amongst others have perfected over the years and the FA need to try everything possible to glean what is the key missing ingredient if it is not obvious.

Everyone, not including England supporters, will be delighted Southgate continues in the role of manager (who is a genuinely nice guy, very intelligent, a philosopher and a perfectionist with unusual dress sense) as he is never going to win anything on the basis of what we have witnessed.

Gareth relax, have a shave (it will make you look younger) and then find the jacket to that three-piece suit.

England players must learn to be comfortable on the ball and be encouraged to express themselves. Tactics mean nothing if the players have no clue where to play the ball and resort to hoofing long balls up the field.

As the French appear to have a ‘love hate’ relationship with Didier Deschamps maybe he could succeed Southgate as the next England manager… but then again he is French!

“I have the simplest of tastes. I’m always satisfied with the best.” Oscar Wilde

BTW – Congratulations to France and Croatia on reaching the World Cup Final!

Trump keeps up spending demands at NATO but turns on charm