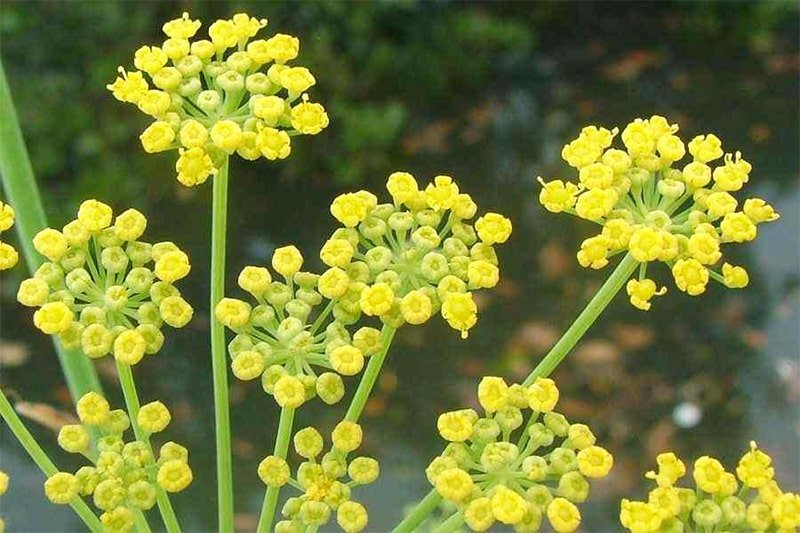 Habitat: A perennial member of the Umbelliferae that grows in well-drained soil throughout Europe and the Mediterranean. It has delicate feathery foliage, umbels of tiny yellow flowers on green fleshy stems, and will grow to over two metres in height.

What does it do: In Roman times the seeds and shoots were eaten to combat halitosis and in the belief that it could control obesity. Pliny attributed 20 cures to fennel, observing that it was used by snakes to improve their vision after shedding the skin.

The original Greek name for fennel was ‘maraino’ – which means to grow thin. This was supported by the medieval herbalists, who prescribed it for the fat aristocracy and merchant classes. It was thought to ward off evil spirits and was used to plug any openings in doors or windows on Midsummer’s Eve.

In 812AD, the Holy Roman Emperor, believed the herb to be so essential to healthy living that he decreed that it be grown in all Imperial gardens.

The Puritan Model Army of Oliver Cromwell were given fennel to eat at times of fasting to suppress any feelings of hunger, also thought to covey longevity and bestow strength and courage.

The main constituents of the plant are anethole, fenchone, flavanoids, coumarins and sterols. Its main applications are carminative, digestive, diuretic, stimulant, anticoagulant, anti-inflammatory, anti-microbial and expectorant, it is also thought to have an oestrogenic effect.

Older readers may recall that fennel was one of the main ingredients of ‘gripe water’, which relieved infant colic. An infusion made from the seeds was given to increase milk flow in nursing mothers and combat morning sickness during pregnancy.

The essential oil extracted from fennel is employed by aromatherapists to combat a wide number of ailments such as bruising, cellulites, obesity, rheumatism, asthma, bronchitis, colic, constipation, flatulence, nausea and irregular periods.

The swollen root of the ‘Florentine fennel’, which may be found in many supermarkets from early summer, can be consumed raw and finely sliced in salads, or as I prefer, sautéed in butter and seasoned with fresh peppercorns and salt.