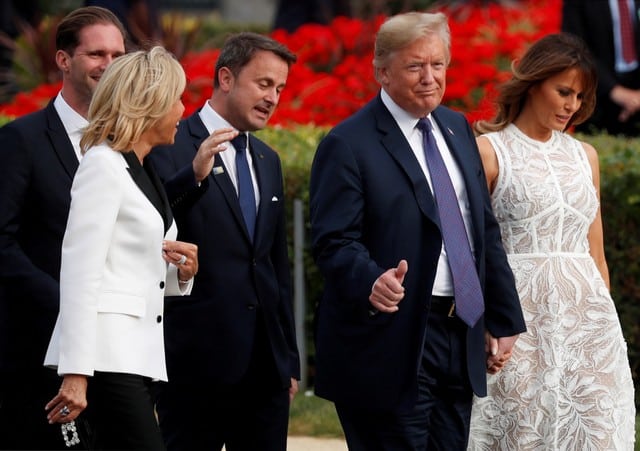 U.S. President Donald Trump on Thursday pressed home a new demand that allies more than double defence spending, but his European counterparts sought to avoid more tension at a NATO summit, saying the president was friendlier than expected.

Leaders’ low expectations showed the extent of European frustration with Trump’s “America first” policies as they headed into a second day of talks with the 29 members of the Western military alliance, set to focus mainly on ending the long war in Afghanistan.

Trump took to Twitter to say publicly what he told NATO leaders privately on Wednesday, calling on all allies to meet a commitment agreed in 2014 to spend 2 percent of economic output on defence to counter threats ranging from Russia’s military modernisation to militant attacks on European cities.

“All NATO Nations must meet their 2% commitment, and that must ultimately go to 4%!” Trump tweeted an hour before the second day of the summit got underway.

Despite the first day’s haranguing of allies for failing to meet spending targets and accusing Germany of being a prisoner to Russian energy, Trump was mild-mannered at a private dinner on Wednesday and avoided any outbursts that many NATO diplomats had feared.

“He was in a good mood, he said Europe was a continent he appreciated,” Luxembourg’s Prime Minister Xavier Bettel told reporters.

“We didn’t know what to expect, it was a positive outcome,” he said of the dinner in a Brussels park, where leaders were treated to an acrobatic display and saxophone music.

French President Emmanuel Macron said the summit atmosphere was “much calmer than everyone had said” and he saw a will to maintain the unity of the alliance, while Croatian President Kolinda Grabar-Kitarovic said Trump was “constructive”.

From abandoning the Iran nuclear deal to putting higher tariffs on European Union steel imports and threatening more on cars, Trump has undermined European priorities in the Middle East, on free trade and on combating climate change.

While Germany, Europe’s biggest economy, has been in Trump’s sights, Britain was keen to make the most of its status as one of the few NATO nations that meet the spending target and sided with Washington’s position that allies should spend more.

“We think President Trump is basically right, that the foundation of a successful alliance is fair contributions by all parties,” said Britain’s new foreign minister Jeremy Hunt.

At the NATO summit, normally a ceremonial affair to cement an alliance that dates back almost seven decades, officials had hoped to limit discussions to strictly military business, especially as deterring Russia is a rare unifying factor after Moscow’s 2014 annexation of Ukraine’s Crimea.

Ukraine’s Petro Poroshenko met NATO Secretary-General Jens Stoltenberg and spoke at the decision-making North Atlantic Council session with leaders, although his hopes of joining the alliance are, for the time being, thwarted by Russia’s incursion into eastern Ukraine and its support for rebels there.

Under NATO rules, countries with armed conflicts on their territory cannot join the Western alliance.

The U.S. president will travel to Britain later on Thursday and then to Helsinki to see Russia’s Vladimir Putin on Monday, a meeting that NATO diplomats say will be the true test of Trump’s commitment to the Western alliance.

Any deal with Putin to call off U.S. exercises in the Baltics or withdraw U.S. troops from the region would be a severe blow to the West’s policy towards Moscow, although diplomats, officials and analysts stressed such outcomes were only a worst-case scenario not based on any official position.

Still, three senior U.S. officials told Reuters that no one in the Pentagon, including Secretary of Defence Jim Mattis, knows what Trump might say in Helsinki.

“Who’s to say he won’t come out of Helsinki saying he and Putin agreed that Russia no longer poses a threat to the rest of Europe?”

England would have been stuffed like turkeys by France