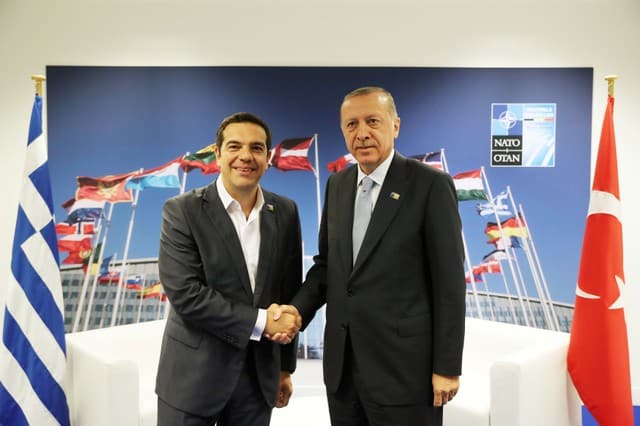 Greek Prime Minister Alexis Tsipras on Friday briefed President Nicos Anastasiades in a telephone conversation about Tsipras’ meeting on Thursday with Turkish President Recep Tayyip Erdogan in Brussels on the sidelines of the Nato summit.

According to a written statement from government spokesman Prodromos Prodromou, in addition to a general briefing, there was an extensive reference to what was said during the meeting about the Cyprus problem.

Anastasiades and Tsipras also discussed the stance of the Greek side in view of the visit of the UN Secretary General’s envoy Jane Holl Lute to Cyprus, with the common aim of resuming the Cyprus talks, Prodromou said. Lute is expected to meet with Anastasiades, and Turkish Cypriot leader Mustafa Akinci, in separate meetings on July 23.

Prodromou added that consultations between the two countries will continue to ensure full coordination of the plans that will lead to the desired agreement for a solution of the Cyprus problem.

On Thursday, Tsipras described his two-hour meeting with Erdogan, as ‘difficult’. He said that he had stressed the importance of the continuation of the talks for a solution to the Cyprus problem in the context of UN Secretary-General Antonio Guterres’ framework.

Tsipras also said that they both agreed on the need for close contacts between the foreign ministers of the two countries on this issue.

The Greek prime minister also emphasised on the efforts of the two countries to reduce tension in the Aegean, after having reminded Erdogan that his recent visit to Athens aimed at improving relations between the two countries.

“Turkish violations and provocations in the Aegean continue and are dealt with on the basis of international law by the Greek side,” he said. “I have presented Erdogan with data that highlight the increase in Turkish delinquency in the Aegean,” he said. Tsipras admitted, that this was not an easy meeting.

Meanwhile, authorities in the north raised a number of objections to the latest report from Guterres on the extension of the UN Peace Keeping Force in Cyprus’ (Unficyp). In a written statement, the ‘foreign ministry’ said that the report is favouring the status quo on the island to the detriment of Turkish Cypriots.

Citing both content and technical concerns, the ‘ministry’ said that, in order for the peace keeping force to continue its presence on the island, the report is trying to give the ‘incorrect impression’ that Unficyp is the side that ensures peace and stability and that it therefore opens the door to ‘artificial agendas created by the Greek Cypriot side’.

The report’s unbalanced approach is beyond comprehension, it said, as, while the steps taken by the Turkish Cypriot side in a well-intentioned and constructive manner are being appreciated, it is trying to conceal the problematic and even worrisome attitudes of the Greek Cypriot side every time.

Thus, the report seems to have been prepared to reflect the steps that the Greek Cypriot side should already have taken as a minimum by attributing equal importance to unequal behaviours.

It also said that the report, like in recent years, has once again tried to reduce the isolation of the Turkish Cypriots that affects all aspects of their lives including, culture, education and sports, to a mere ‘concern’.

“In general, the report is evaluated as an implicit compromise of the wish of the Greek Cypriot side in the direction of not changing the status quo and of the UN peace keeping force not losing its position”, it said.

The breakaway regime, it said, will convey its objections to the report to the UN secretary-general and UN officials.