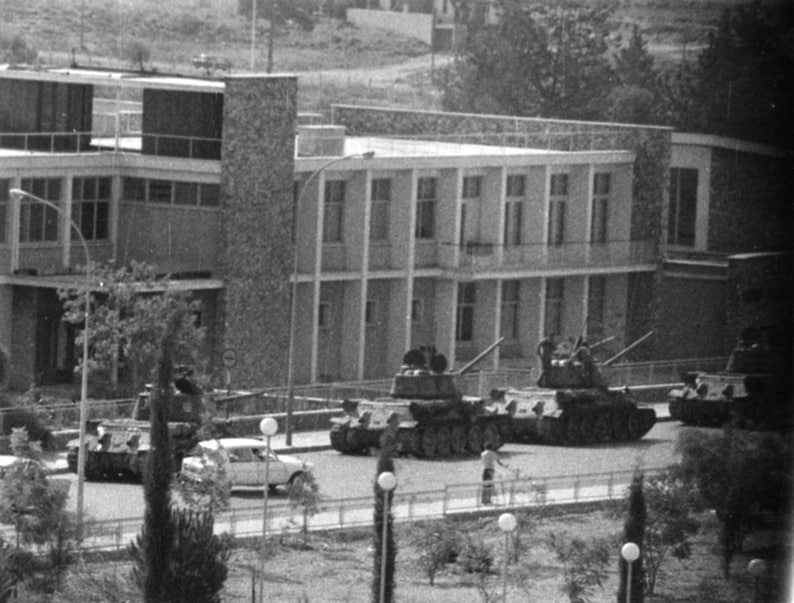 Tanks rolling through Nicosia on the day of the coup July 15, 1974

IF we ever declared a memorial day for coups, then July 15 would be the most obvious choice as this date is the anniversary of three coups all linked to Cyprus: the royal coup in Greece on July 15, 1965, the Greek Junta invasion of Cyprus in 1974 and the (unsuccessful) July 15 coup in Turkey in 2016. These coups, especially the first two, have changed the flow of Cyprus’ history.

On the surface, the royal coup in Greece in 1965 could be considered irrelevant to developments in Cyprus. Yet it was this coup that led to the coup of the colonels on April 21, 1967, and this in turn established the Junta that staged the coup in Cyprus seven years later. Unfortunately, for Greece and Cyprus, the king at the time, Constantine Glucksburg – under the influence of his mother Frederica (who had been a member of the Hitler Youth) – proved incapable of performing his duties as a constitutional monarch.

In July 1965, Constantine II, as he was known at the time, refused to allow the Prime Minister George Papandreou to replace the Defence Minister Petros Garoufalias. This constitutional aberration sparked a chaotic political period, known as the time of the apostates, that resulted in the April ’67 coup and the imposition of the military dictatorship. It was a dark chapter in the history of Greece as, after Papandreou’s resignation, all the governments that were formed in succession by MPs of the Enosis Kentrou party came about through bribery and the promise of political positions. This was why the Greek people dismissed politicians who took power at the time as apostates.

The period was marked by the rampant interference in the political scene by King Constantine, in gross violation of the constitution of the country. The political turmoil his actions caused paved the way for the army colonels to take power in April 1967. While the king initially hesitated to sign the decree imposing martial law, his despotic mother intervened and ordered him to “Halt’s Maul und unterschreib” – “Stop and sign” (Speigel May 8, 1967). This was when the countdown for the destruction of Cyprus began.

Analysing the events of July 15, 1974, the term ‘coup’ is actually a misnomer as I have mentioned in previous articles. It would have been a coup if Cypriots overthrew the president rather than a foreign country, in this case Greece. As much as we do not like to admit it, there can be no doubt that it was actually an invasion. The Greek Junta did not have to land troops to overthrow Makarios because it was already running the National Guard and in addition had Greek soldiers here – the Eldyk contingent – to complete its unholy work. It is with great pain we realise that Greece, even under military rule, caused such an irreversible disaster to the Hellenism of Cyprus.

But why was there a Greek invasion? To answer this question, we should go back to the deal struck between the Junta and the government of Turkey, under the wing of the American eagle at the Nato conference in Lisbon in June 1971. In his book, US Foreign Policy and the Cyprus Question, professor Van Coufoudakis wrote: “It was there (Lisbon) that the Greco-Turkish agreement for the termination of independence through the partition of the island was forged… The State Department agreed to back the double enosis solution, to which Greece and Turkey arrived after secret negotiations.”

For this agreement to be implemented, President Makarios either had to be sidelined or assassinated. He was the main obstacle, as was stressed in their close circle by Ambassador Panayiotakos and the then Greek foreign minister Xanthopoulos-Palamas. If this secret agreement was frightening, even more frightening were the means of implementing it. Most frightening of all was the zealous backing of the Junta’s policy by Sek union, the teaching unions Poed and Oelmek and the nationalist football clubs.

When the Camorra of Athens failed to sideline Makarios through the Cypriot bishops’ attempt to dethrone him, it proceeded to Plan B – his assassination. It would have imposed a puppet regime, which would have subsequently implemented the gentleman’s agreement of 1971 for the partition of Cyprus and the creation of a Greek part and a Turkish part.

The report of the Pike Committee (of the US administration) confirmed that Turkey had been informed about the July 15 Greek invasion. But things did not go according to plan. The happy ending the Junta expected turned into a fiasco because Makarios survived. The president it installed, Nicos Sampson, could not take any binding decision because Makarios was still considered the lawful president of the Republic. With the situation out of control, Turkey deceived the Junta strongman, Brigadier Ioannides, violating the gentleman’s agreement. The initial plan for a tourist-type landing was transformed into a fully fledged military invasion.

Meanwhile, the consequences of the failed coup in Turkey, two years ago, are also being felt in Cyprus. In order to establish his absolute power, President Erdogan pursued a “real change of the state”, through “systematic and drastic persecutions”, which also affect our Turkish Cypriot compatriots. We have become, sadly, witnesses to the illegal and crude violence against Turkish Cypriot dissidents. This situation is reminiscent of Cyprus during the years of Junta rule in Greece (1967-’74). Democracy in the north is gradually fading, making a solution of the Cyprus problem much more difficult.

Another Brexit referendum? bring it on