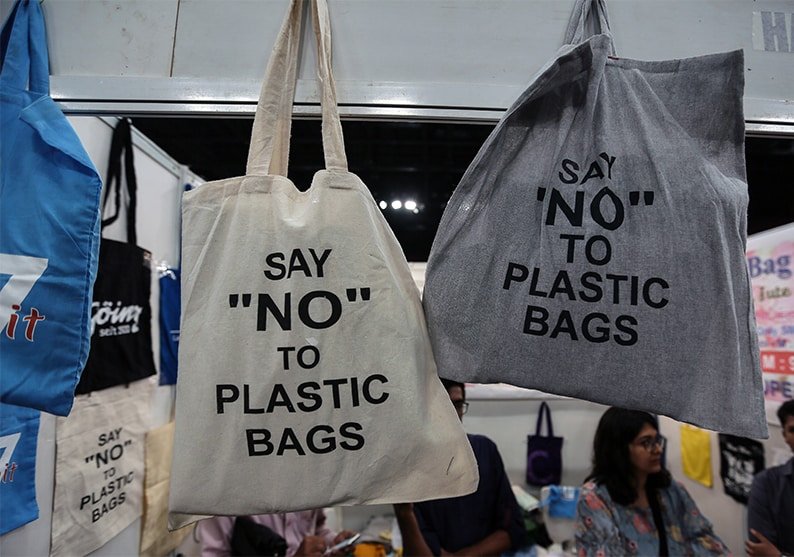 With the plastic bag charge now two weeks old, it may seem surprising that some of those cashiers and kiosks owners who seemed to give away the bags with such gay abandon just last month were often angry over the waste.

“Why do you need two plastic bags for two small things?” I heard a cashier chidingly quiz a customer this week.

“It is far too late,” another cashier told the Sunday Mail. “We made sure that our children will have a sea of plastic to swim in, and now they introduce this small charge? The people still buy the plastic bags, what sort of law is that?”

A kiosk owner also thinks the six-cent plastic bag charge is a half measure. “If they really want to help the environment, why don’t they sell only paper or canvas bags?” said a man who runs a kiosk in Nicosia’s busy Ledra street.

“If they want to do this right, the way to go is in the footsteps of Lidl, replace all plastics as soon as possible.”

Lidl Cyprus announced earlier this month it will stop selling single-use plastic items such as drinking straws and cups, plates, cutlery and ear swabs in all of its 17 shops in Cyprus by the end of 2019. It will also stop selling disposable bags from January next year.

A supervisor at Metro supermarket said the shop had been preparing for change for some time, selling canvas bags and carrying out campaigns; and she thinks that is why there have been no major problems. “The young and foreigners have no issue with the concept, but some of the older people will need some time,” she said.

“We have waited for a long time to do this,” she said, reiterating what other employees and a number of customers said. “Our oceans are filling with plastic, and we think of the Cypriot mentality?”

Supermarket employees said that very few people are now buying the plastic bags, opting instead for the reusable bags. Others do without altogether.

“When they have few items, they just carry them, and when they have many, they put them back in the trolley and take the trolley to their car,” a cashier of the Metro supermarket explained.

The cashiers in supermarkets have no qualms about charging the money. The difference with the kiosks is that it is either plastic bags or nothing, as reusable bags are – so far – not for sale in them.

At least some kiosk employees and owners feel this causes problems. When customers buy only a couple of items, they say it makes sense not to offer them a bag, as this is a waste.

However, when more items are bought, they argue it is not good service to charge people for a plastic bag as well as for their goods.

The kiosks have different ways of dealing with this. One man said he simply hides the plastic bags and pretends he doesn’t have any. A woman told the Sunday Mail she charges only five cents instead of six, as this sounds better. Yet another said he pays for the bags himself when people buy a lot from him.

There is still a way to go, and most would agree we should keep moving. While Lidl Cyprus has announced it will stop selling plastic straws, Ammos Beach bar in Larnaca is making the straws from pasta.

And changes around the world are happening. On Tuesday, Starbucks pledged to phase out the use of plastic straws in its coffee shops around the world by 2020, opting for a new strawless lid and straws made out of non-plastic material. The company anticipates the change will eliminate more than one billion plastic straws each year from Starbucks locations. Options are to make them with a variety of different materials, including stainless steel, bamboo, paper and even seaweed.

Critiques say this is not going to happen any time soon in Cyprus.

“Before the charge for the plastic bags, people came in and took one Coke, one straw and one or even two plastic bags,” said a young woman at a till in a mini market in the centre of Nicosia, “Starbucks is an American company and they follow the rules. It will happen after 10 years in Cyprus.”

Trump told May to sue the EU over Brexit (Updated)