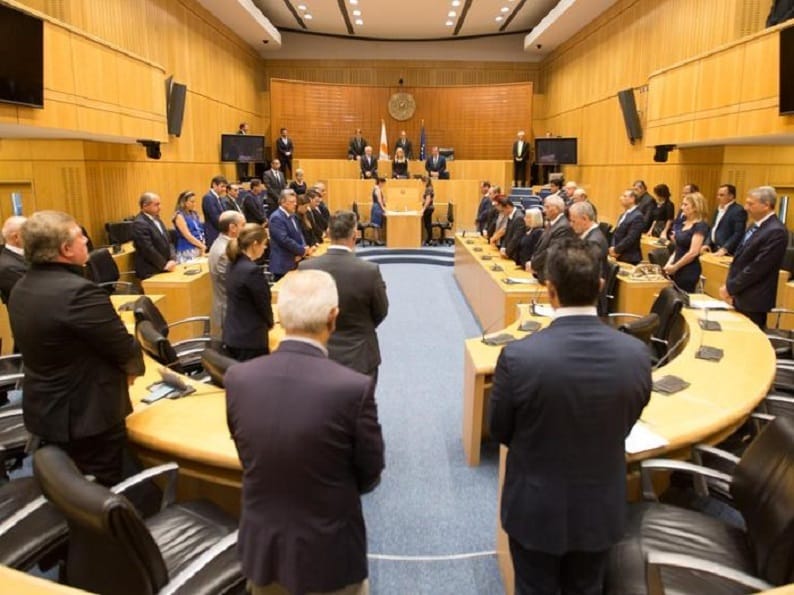 The House on Sunday held a special session of the plenum to mark 44 years since the 1974 coup and subsequent Turkish invasion. The session was addressed by party leaders in the presence of President Nicos Anastasiades.

Main opposition leader Andros Kyprianou in his speech, referring to the lessons of the coup said: “There is no treachery without traitors, no crime without criminals. The coup was planned consciously and methodically by Nato members, Grivas and Eoka B. Anti-communist hysteria and terrorism were on the agenda.” Cyprus, he said, was the target of American imperialism and Turkish expansionism and this was the goal at least a decade prior to 1974.

“Today, 44 years later, the tragic irony of history is that Turkey again finds valuable allies on our side, those who use the same or similar rhetoric to the pre ’74 era, trying to convince us it’s better to leave things as they are,” said Kyprianou.

“The same can be said for the unrealistic and demagogic approach towards a unitary state and the abandonment of a bizonal bicommunal federation. The true patriots are those who today continue to struggle to reunite our country, not those who soothe the people with false words and at the same time are comfortable with the occupation. True patriots are those who envision a peaceful future, a whole Cyprus and freedom that belongs to the people.”

He said Anastasiades must realise the weight of responsibility he has, doing what it takes to not go down in history as the president of division.
Cyprus would not be saved by the “bazaar of passports for business” which only enriches government cronies, he added. Cyprus would only be saved if it was reunited.

“Today we remember the rivers of blood spilled in the land of Cyprus for freedom, democracy and dignity of our country and our people. Today we honor the real heroes. Those who refused to do the bidding of fascism and paid with their lives,” he said.

Ruling Disy’s Nicos Tornaritis who called on the parties to throw their supports behind Anastasiades condemned the ‘twin crimes’ saying: “We do not forget, and we will never forget the Turkish invasion, the war crimes and the occupation that continues to this day”. He added: “Our children have had to grow up in a divided, abnormal homeland.”

Tornaritis said lessons needed to be learned from the mistakes of the past so they would not be repeated.

“Forty-four years later, we still have open wounds that recur rather than heal. Our homeland remains divided. We can not repeat the expectation of vindication and return [here] every year as if it were just a habit,” he said.

Tornaritis said the current stagnation in negotiations could be replaced by a new momentum taking into account how much work and energy has already been put into the talks and the crucial remaining issues on the table “face to face with Turkey”.

Citizens’ Alliance leader Giorgos Lillikas diverted his coup address towards the controverial glossary of more conciliatory terms journalists can use when writing about the Cyprus issue, saying it had provoked a strong reaction in society as a whole.

“Some, once again have tried to put the cart before the horse,” he said.

“Problems like Cyprus are not due to psychological factors and can not be solved with communications tricks that ignore the truth and realities.” he added.

“Cyprus was and remains a problem of invasion, occupation and colonisation, a geopolitical issue, and as such we must face if we are to achieve an equitable solution that will reverse the situation created by the invasion.”

He said unfair solutions, which are based on a constitutional arrangement that falls outside the rule of law and the principles of democracy, “are by nature stillborn”.

He was pointing this out, he added, because within days, Anastasaides would be speaking with a UN envoy on the way forward for the talks.

“The resumption of talks should not be an end in themselves. “I have no doubt that the various capitals will pile on the pressure and try to blackmail our side to consent to a resumption of talks due to the new situation created by hydrocarbon finds in our EEZ,” Lillikas added.

“With proper use of this we can create favorable conditions to strengthen our own negotiating position. At this stage however, there is a serious possibility that the interests of individuals who have acquired rights to our hydrocarbon reserves, will be served by a fast closure of the Cyprus issue and the president should be particularly careful in handling this.”

He also said it would be naive to expect a conciliatory Turkey in a new round talks given the situation in that country. “It is an illusion to believe that Turkey will abandon voluntarily, what it considers it has ‘acquired’ in Cyprus.”

“It’s time, with realism and responsibility, to re-assess all data and the whole course of the Cyprus problem within the framework of a new assertive approach with a new philosophy and new goals. Only in this way will free ourselves from the current deadlocks and will pave the way for a just solution.”

Greens leader Giorgos Perdikis in his speech said he wished he could honour the victims of the “treacherous coup and the brutal Turkish invasion” and to “address the heroic dead” but “I cannot, unfortunately…”

Perdikis said it has been 44 years and Turkey was still occupying Cyprus preventing Greek Cypriots and Turkish Cypriots from living freely in their homeland.

“Worst of all is that the Cypriot leadership is negotiating terms of a compromise in line with the occupier’s requirements,” he said, also referring to the glossary “prepared to beautify an international crime and violation of human rights”.

“Reconciliation between Greek and Turkish Cypriots, Maronites, Armenians and Latins arises through their common struggles for freedom, independence and social progress,” he said.

“This is our only hope. The leaderships have failed. We need vision and hope and we will not find them in those who govern us, politically, economically or socially.”

Diko leader Nicolas Papadopoulos said the House, nor the Republic accepts the fait accompli of the Turkish invasion and of the “realities” created. He said attempts to legitimise such faits accomplis must be resisted.

“Of course we know and recognise that in order to liberate our homeland and overthrow the fait accompli of invasion and occupation, we have to pay a heavy price and seek a political solution through negotiation, which will be bitter and painful,” he said.

Socialist Edek leader Marinos Sizopoulos said the Republic of Cyprus was established and maintained with sacrifices and the blood of heroes. “We will not allow to be nullified by a political signature. We have to strive and deliver to future generations a free and democratic country as envisioned by those who gave their last breath… those we honour today,” he said. The Solidarity Movement and far-right Elam also addressed the session.

Trump told May to sue the EU over Brexit (Updated)

House and vehicle fires at dawn in Limassol