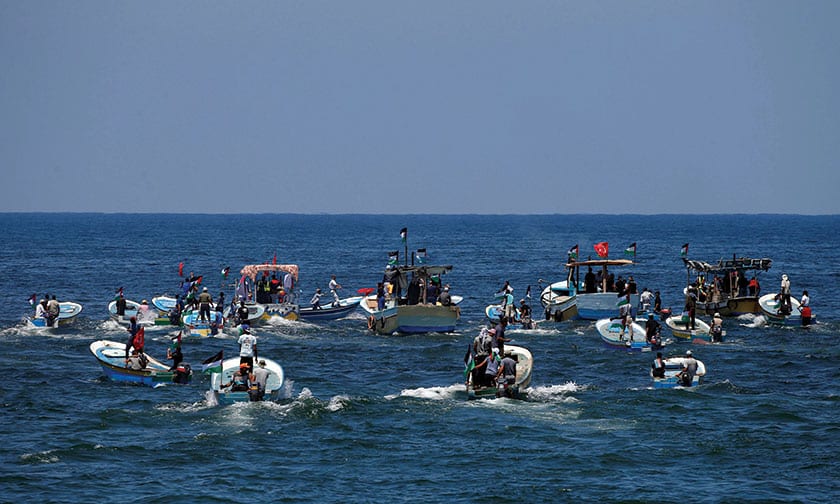 More than two weeks after it surfaced, it’s still unclear whether Israel’s proposal to build a pier in Cyprus for Gaza has substance to it or whether it was hyped on the Israeli side as a feeler.

Outwardly at least, the matter appears to have gone dead since late June when it first appeared in Israeli media, which said the pitch was discussed during the latest trilateral defence summit of Cyprus, Israel and Greece held on the island.

At the time, deputy government spokesperson Klelia Vasiliou said no agreement was in place, but acknowledged that a request had been made by Israel and was being considered.

The Sunday Mail contacted government spokesman Prodromos Prodromou for a follow-up on the subject.

He stated: “The [Israeli] request is currently being examined, as there are various parameters to the issue. We view positively the possibility of Cyprus helping out with the situation in Gaza.”

Prodromou could not furnish details about the proposal, saying the matter was being handled by the foreign ministry.

Foreign minister Nicos Christodoulides could not be reached despite repeated attempts.

The Jerusalem Post, citing a TV report, had claimed the principles of the plan were agreed between Israeli defence minister Avigdor Liberman and his Cypriot counterpart Savvas Angelides during the course of the trilateral summit in Cyprus.

Within two weeks, work would begin on a detailed plan that would be presented within three months, the Jerusalem Post had said.

It said Liberman’s Cyprus port plan would include construction of a special pier for cargo ships carrying goods destined for Gaza. They would be checked with the help of an Israeli monitoring mechanism to ensure that no weapons were being smuggled into the Hamas-controlled area.

Goods would subsequently be sent to Gaza directly by ferry, given that the enclave lacks a port large enough for the docking of cargo ships.

But when contacted, Angelides denied that anything – even an outline – had been agreed at the time.

In any case, he added, questions should be addressed to the foreign ministry.

The Mail understands that the jetty, if built, would be located at the port of Limassol.  And the venture, should it come to pass, would “involve other countries as well beyond Cyprus and Israel”, a government source said on condition of anonymity.

The Israeli embassy in Nicosia, which earlier had declined to comment, could likewise not be reached in time for this report.

As for the Palestinian side, they appear to be taking a wait-and-see posture regarding the Israeli idea for a Gaza sea route via Cyprus.

In a emailed statement responding to the Mail, the Palestinian embassy in Nicosia said that the Palestinian National Authority was the only competent authority to approve such a plan but confirmed the proposal existed.

The embassy added that the ”Palestinian Authority has not been presented with this plan. In this regard, we would like to express our deep appreciation to the special close relations between Palestine and Cyprus, who in turn confirmed that they would not sidestep the Palestinian Authority in discussing such plans.”

Israel controls two land crossings into Gaza and Egypt controls a third. But it is reported that the Egyptian crossing at Rafah is often closed and is not designed for the passage of goods and that most commercial and humanitarian goods bound for Gaza enter through Israel’s Kerem Shalom crossing.

Still, the thinking behind locating a port for Gaza in Cyprus remained unclear.

Asked for a comment on the Israeli proposal, Ryan Dawson, an author and political analyst stated:

“Israel will do anything to prevent Gaza from having a shred of independence.”

A report published by the Al Bawaba news outlet on July 9 may shed some light.

The outlet quoted professor Laleh Khalili, an expert in Palestine Studies at the School of Oriental and African Studies, University of London.

He told Al Bawaba: “As recently as 2014, Germany, France and Britain were pushing Israel to allow for the establishment of a shipping route between Gaza and Cyprus that would – in the absence of any land routes – allow for the delivery of materials for survival for the Gazans.

“My sense is that reviving the Gaza-Cyprus route is a pre-emptive plan by Israel to forestall the possibility that Gazans would actually control the port or the shipping route and Israel would continue to maintain full control of the venture.”

Khalili went on to doubt whether a port in Cyprus “will be anything but a mechanism for importation of goods for sustaining basic life in Gaza, and very strongly doubt it will be used as an export port. Certainly there is no way that Israel would allow Palestinian people to leave via this port, so frankly I don’t see this as anything but yet another modality of control by Israel.”

She said: “Until 2007, when restrictions on movement of Palestinians were further tightened, Israel and the West Bank were the natural destination markets for Gaza-produced goods, with 85 per cent of Gaza’s outgoing goods sold in these areas. In 2010, following the Marmara Flotilla, Israel allowed Gaza goods to be exported abroad only, and just a handful of trucks departed Gaza every month, usually as part of subsidised projects.

“The loss of access to its natural markets in Israel and the West Bank was one of the major contributors to Gaza’s economic paralysis, for the collapse of businesses and for the high rate of unemployment, which, in turn, resulted in significant dependency on humanitarian aid.”

In a report last year, the United Nations declared conditions in Gaza ‘unliveable’.

Only this week, there were three developments relating to Gaza and its blockade by Israel.

The step was in response to Palestinians flying balloons and kites into Israel from Gaza. Israel calls them ‘airborne incendiary devices’.

Secondly, the Israeli navy intercepted a boat which departed the Gaza Strip carrying injured Palestinian civilians. The boat intended to take the civilians injured from the Gaza fence protests to Cyprus for medical treatment.

The navy stopped the boat, surrounding it and towing it to an Israeli naval base at Ashdod.

Lastly, and coincidentally, the 2018 ‘Freedom Flotilla’ was this week on the final stretch on its journey to Gaza at the time this report was being written.

In an email, Ann Wright, a co-coordinator, told the Sunday Mail that the flotilla would be stopping over in Naples, Italy, “then to Palermo and off to Gaza”.

The flotilla is carrying a quantity of much-needed medical supplies.

Should they break through the blockade and reach Gaza, the four boats will be donated to the Gaza fishermen.

During the same week, a Jerusalem court issued a temporary confiscation order for two Norwegian ships planning to sail to Gaza; if they are intercepted and towed to an Israeli port, their value will be paid to Israeli terror victims’ families as compensation.