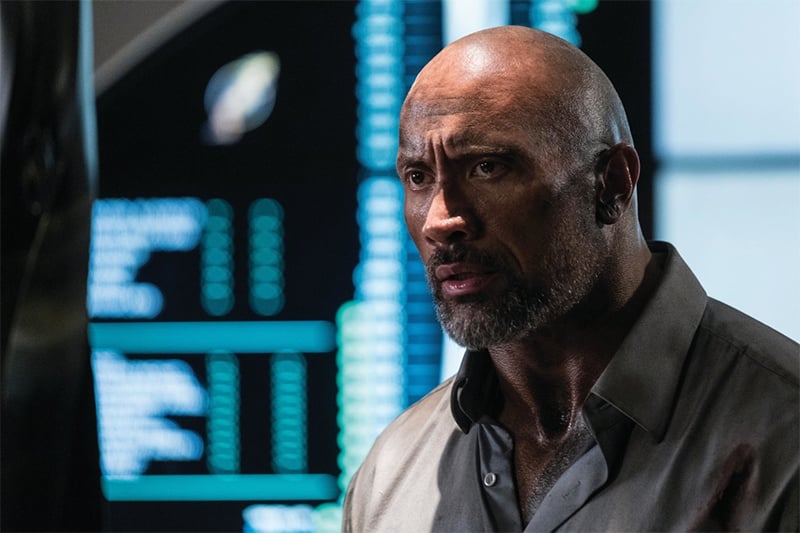 Flann O’Brien, alias Myles na Gopaleen, wrote a column called ‘The Plain People of Ireland’ back in the day, including a gag where one plain person of Ireland is singing the praises of Jamstutter, an athlete of legendary prowess. That’s all very well, says another plain person of Ireland, but I bet he’s got nothing on Patsy, the Tipp goalie who stopped 52 shots in the hurling final of 1937. “Yes,” replies his friend irrefutably – “but Jamstutter has a wooden leg!”. Much the same may be said of Will Sawyer, played by Dwayne Johnson in Skyscraper. Not only does Will do all the things you’d expect from a Dwayne Johnson character in a rackety action movie – but he does them with an artificial leg.

He climbs a construction crane adjacent to the titular building, as a crowd gawps from below. He leaps from the edge, and hangs on to the burning skyscraper. He ties a rope around his waist and ventures out on a narrow ledge, inching across like a human fly. He even gets in a fight with a baddie who knows about his disability and kicks his prosthetic leg out of its socket, but Will still manages to hobble around and win the fight – all on one leg! He’s unfazed, like all good Dwayne Johnson characters. At one point he extracts a massive metal splinter from his shoulder, cleans the wound with vodka then patches it up with duct tape. If there’s something you can’t fix with duct tape, he remarks to no-one in particular, “then you’re not using enough duct tape!”.

Our hero’s weird devotion to duct tape is one of the few eccentric touches in a film which, for the most part, is as blunt and monolithic as its title. The artificial leg is another eccentric touch, though it’s hard to know why it’s even there (it plays little part in the plot). Will was once an FBI agent till he misjudged a hostage situation, leaving him with a stump above the right knee and a fervent desire to leave that life behind and become a man of peace; “I’ve kind of put my sword down,” he says. All he wants now is to be a good provider, a good husband to Sarah (Neve Campbell) and a good father to his boy-and-girl twins, with whom he plays a particularly saccharine game. “Daddy loves who?” he asks, and the kid replies “Me!”, then he asks the other twin, then the first one again and so on ad nauseam. You’d think the kids would shout out alternative answers after a while – ‘The crack pipe!’; ‘Big Bertha!’; ‘Himself!” – just to mix it up a little, but apparently not.

Maybe the prosthetic leg is part of Johnson trying to play more vulnerable as he grows older (he even has a greying beard here, as befits his 46 years) – but of course the man-of-peace routine comes to an end, the reason being a Hong Kong skyscraper blaze that’s actually a fiendish plan to steal a hard drive belonging to the owner of the building. Sarah and the kids are caught in the crossfire, so Will is forced to pick up his sword again. The setting is Die Hard, the plot channels Towering Inferno. Other eccentric touches are thin on the ground, but they do include Noah Taylor as a tweedy Englishman who skulks around with a permanent air of prissy dissatisfaction. He turns out to be a henchman, so maybe he’s tougher than he looks; then again he also gets beaten up by a girl, so maybe not.

The girl is Sarah, Campbell’s role turning out to be surprisingly meaty – certainly a long way from the doting wifey she resembles in her opening scene. (I’m not a big businessman, says modest Will, I just work out of our garage; “It’s a good garage,” she simpers.) Skyscraper stands out in small ways, but it’s hard to see – for instance – why it should’ve attracted Oscar-winning DP Robert Elswit (who shot There Will Be Blood). There’s a lot of havoc and wanton destruction; a burning tree nearly brains the kids, a helicopter slams into the penthouse. The film cost $125 million, and it’s clear where the money must’ve gone. Still, there isn’t much to get excited about.

That said, there is one remarkable scene, a final shoot-out in a field of “motion-sensitive panels” which reflect all around them, giving the impression of a hall of mirrors. The effect, as characters converge and bullets fly, is almost avant-garde, the image splintered into shards of smaller, slanted, multi-angled images in a mad, random jumble. For a moment, it feels like we’ve teleported to another, more imaginative movie – but there, in the midst of all this visual dazzle, is good old Dwayne Johnson, punching thugs and saving his kids and telling the villain ‘Look out, I’m behind you’. And on just one leg, too.