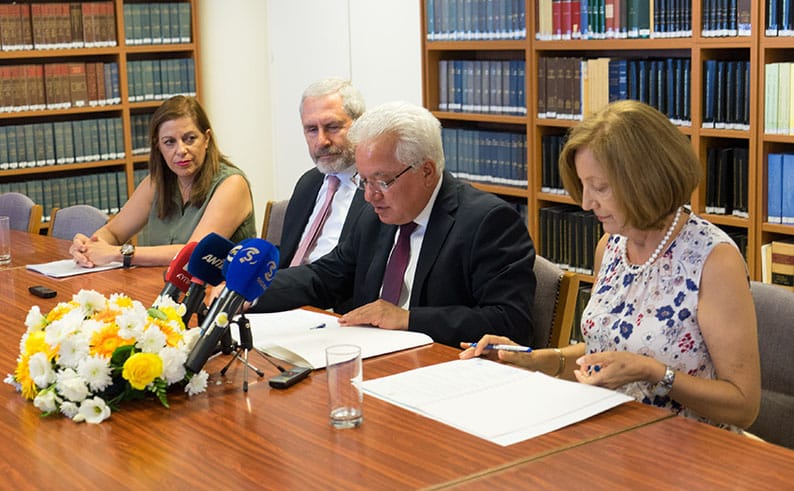 The Ministry of Justice and the Association for the Prevention and Handling of Violence in the Family (Spavo) signed a cooperation protocol on Monday to tackle domestic violence and human trafficking more effectively.

Justice minister Ionas Nicolaou, in statements after signing the document, referred to the recent upgrade of Cyprus in the US State Department’s 2018 Trafficking in Persons to Tier 1.

“We must tackle the phenomenon with even more determination. While Cyprus’ practices in recent years have been recognised there are more things that can be done,” he said.

Nicolaou told his audience that 52 cases of human trafficking have been investigated over the past three years, of which 36 were prosecuted. He added there are still problems in specific workplaces such as agriculture and livestock farming.

Regarding trials, he remarked that the criminal court proceeds more rapidly then the district court. “We expect this to improve as part of the reform of our justice system,” he said, referring to plans to increase the working hours and number of personnel at the district court.

He said policies should be reviewed to make them more effective and the agreement with Spavo will help. Statistics will be compiled regarding the 24-hour Spavo telephone helpline for violence in the family.

The protocol, he said, endeavoured to make remove bureaucratic procedures which previously delayed the provision of the necessary protection.

It would also be proactive because apart from communicating with the victims of violence it can also help to prevent incidents.

According to Nicolaou, more coordination and cooperation between NGOs and the various state departments is needed. That is why the possibility of involving Spavo in the effort of improving the prevention of human trafficking was also discussed.

He clarified however that the Spavo helpline is solely a line for domestic violence.

“We have to distinguish between the two categories of social problems. We cannot link domestic violence and trafficking in human beings. However, what we are pointing out is the need to use every means at our disposal to help more generally to prevent and deal with each of them.”

To this end, he said that Spavo members who are already trained in issues related to human trafficking will be further trained in cooperation of the anti-trafficking department headed by Rita Superman.

On her part, head of Spavo Kiki Pogiatzi said the aim of the NGO is to better serve people and this goal cannot be achieved without the cooperation of the justice ministry and police.

Spavo’s free helpline 1440 is staffed by psychologists and social workers. It provides counselling support and info on services related to domestic violence and legal rights. It is available 24 hours seven days a week.

Staff to starting moving into new town hall next month