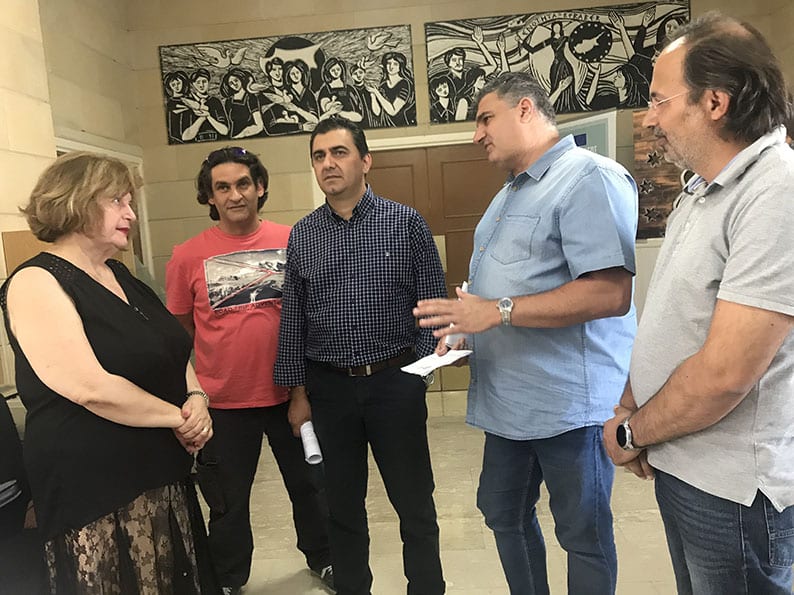 Representatives from Oelmek, Poed and Oltek handing over the letter to the education ministry’s permanent secretary Egli Pandelaki

Education Minister Costas Hambiaouris agreed on Monday to engage in talks with the teaching unions on Tuesday, after they extended an invitation he visit their offices amidst an escalating crisis.

After a three-hour meeting on Monday morning, unions jointly prepared a letter for the minister. In his absence, the letter was delivered to the education ministry’s permanent secretary Egli Pandelaki.

Signed by Oelmek, Poed and Oltek, the letter outlined the aim was to discuss the “procedure and conditions of dialogue”.

They invited Hambiaouris to visit Oelmek’s offices on Tuesday instead of holding the talks on July 24 as the minister had proposed last week.

Handing over the letter, Poed union leader Fylios Fylactou said they did not specify a time as they understood the minister may have a busy schedule.

Early afternoon however, Hambiaouris posted on Twitter that in a bid to ensure the smooth running of school operations in September, he had accepted the invitation to meet with the unions.

This was also for the good of the students, he stipulated.

State school teachers have been furious after Hambiaouris decided to get cabinet’s approval to scrap a system that allowed teachers to reduce their teaching hours according to their years of service.

Slamming the move, they were out on the streets last week calling on him to resign in protest over the changes and because the minister had not held talks with them over the matter.

They threatened to keep schools closed when the new year starts in September.

Despite protesting outside his ministry, Hambiaouris maintained that he was always open to dialogue but the unions were not the ones that had appointed him and so could not call on him to resign.

Handing over the letter, Fylactou said that during last week’s protest, the teaching world asked for two things. “The return of democratic procedures in education and to remove the attitude of taking decisions without dialogue and presenting things as a done deal. At the same time, the dignity of teachers should be respected.”

Unions have also invited the chairman of the education service committee to attend Tuesday’s meeting.

“I really hope it is possible to begin the dialogue again for the good of everyone, primarily our children.”

The letter also included the statute and regulations of the education service personnel committee which is the body by which collective dialogue takes place between the government – as the employer – and unions, as the employees.

Commenting on the matter, Auditor-General Odysseas Michaelides said the issue of teachers having their hours reduced after certain years of service had come up for the first time in an audit report in 2004 though no study had been carried out at the time.

“This isn’t done in any other country in the world and even in countries where it is done, it is done so very differently.”

The first time the audit service had provided recommended on how to slash the system was in 2011, Michaelides stipulated.

Local author has fought a war with darkness