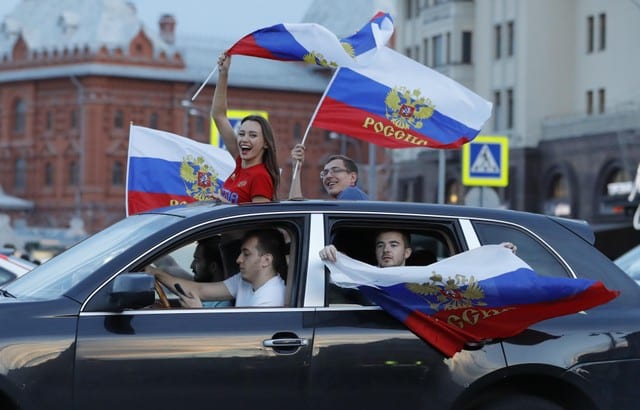 The World Cup failed to deliver a final ‘Roy of the Rovers’ story that everybody except French supporters had wanted in what turned out to be a very strange almost comical game.

It’s not right when the play-acting antics of Antoine Griezmann and the inconsistency of VAR changed a game that Croatia had been dominating. So much for ‘role models’ as it is very sad that kids are already mimicking diving techniques.

We had been warned before the final by the English commentary team that all previous finalists with a Monaco goalkeeper (and there were three) had lost, and so it proved.

France were hot favourites to lift the World Cup and I would have loved to have seen them win with style but that is not Didier Deschamps way (although another ‘water carrier’ from above did take his revenge during the presentation ceremony).

I’m dying to hear Eric Cantona’s take on it.

Europe has been credited with domination in the World Cup as other continents were lambasted for their perceived failure. But did they fail?

Who were the winners? Well the real winners were the Russian people who from the moment the first five goals went in against Saudi Arabia were amazing and charming hosts and delivered a wonderful tournament.

Who were the losers? It had to be FIFA and the bungling Gianni Infantino. The controversy of VAR was inexplicable, Switzerland escaped with a slap on the wrist and a token fine for making political gestures, England were fined 50,000 for wearing unapproved ankle socks and now they have decreed that TV cameras cannot focus on supposedly beautiful women in the crowd.

The English media have at last given up on their kidology and admitted that England weren’t so good after all and need to find their own Lionel Messi or a Luka Modric.

However Harry Kane with two goals, three penalties and an accident won the Golden Boot but then showed a total lack of class by not bothering to leave his Playstation to go to Moscow to collect the coveted award.

As the dust settles on another World Cup, what have we learnt? Aging players should not carry on playing for one competition too many, as after their ‘use by date’ it can be embarrassing for them. Transfer and wage caps must be introduced by European Leagues ASAP as player values pass the two hundred million mark.

After around 6,000 minutes of World Cup football you can imagine what useful things you could or should have done in that precious time?

The biggest over-achievers included Russia who have to build on their successes for the next tournament (and they can have no excuses as the whole country will want to kick a football), England who managed to qualify from the group stages (you have to humour them) and Croatia who played with passion, spirit and skill.

Major under-achievers included Portugal, Spain, Argentina, Brazil and Germany who will no doubt return stronger, apart maybe from Portugal if Cristiano Ronaldo decides to retire from the international scene.

Coming back to football in sunny Cyprus it is encouraging to see an understanding of the need for change but (and there is always a but) those with a vision for the future of Cyprus football remain convinced that nothing will happen.

As Apoel and Apollon get off to a virtually unnoticed and stuttering start in the Champions League and the Europa League you cannot help wondering what could be done to improve things.

Maybe businessmen investing two million Euros for ‘papers’ in apartments and offices on Limassol seafront could be offered ‘papers’ for a similar investment in Cyprus football clubs? I would be knocking on the doors of Alisher Usmanov and Roman Abramovich who is in need of an EU passport.

Alternatively an intervention by government and the Central Bank could offer some convertible concessions to developers to reduce their NPL’s by building new football stadiums?

Talk is cheap and maybe I’m simply ‘grasping at straws’ or just talking nonsense but is it not worth trying to do something to change Cyprus football?

Thankfully we can look forward to the new football season without VAR (very ambiguous results).

So it is ‘au revoir’ and ‘do svidanija’ from Moscow!

Local and international artists come together