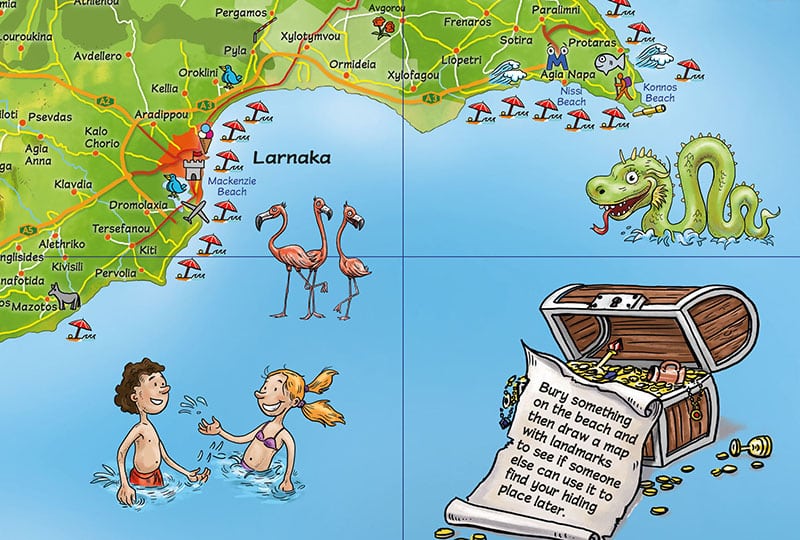 Do you remember when that CTO map of Cyprus was all we had? It was so good, you’ve probably still got a copy in your car somewhere, even though you’ve been using Google Maps and GPS for years. However, if you’ve lived here for any length of time you’ll know that both pale in comparison with the roadside yiayia: possibly the most accurate form of navigation ever to exist. When it comes to tracking down something in a village your best bet is still just to drive there and ask. Which just proves the value of native knowledge.

It’s this local expertise that’s the premise behind the latest map of Cyprus. A mine of information, it’s packed with interesting detail, fascinating facts, and stuff only a long-time local would know. Hand-drawn and gorgeously illustrated, it’s also the first of its kind in terms of local cartography. Because this, unlike every other map of the island, is aimed at your kids…

“The idea of a kids’ map came when my granddaughter came to visit us and we had to think about what activities – besides the beaches – were suitable for children,” explains the map’s author, Christiane Sternberg, a writer and journalist who, although originally from Germany, has lived in Cyprus for over a decade. Known for her off-beat projects (she’s one of the authors behind the graphic novel Aphrodite – The Naked Truth) and her passion for the island – “it’s been a long relationship, but I’m still in love!” she laughs” – Christiane teamed up with graphic designer Marcos Gittis and illustrator Nicolas Rivero to bring cartographical Cyprus to life: an undertaking that, she explains, fills a real gap in the market.

“If you’re on the forums, you know the same questions are always asked: ‘I’m coming to Cyprus with my kids’, or ‘My grandchildren are coming to visit me. What can we do?’ The answers and suggestions were always the same few things,” she reveals, “and yet I knew from my own experience that there was far more to Cyprus than just waterparks! Plus,” she adds, “there are ways to make what is there more interesting and accessible to kids: when my own grandchildren visited the Paphos Archaeological Park, we came home and created our own mosaics; it made the visit more entertaining and provided an engaging learning experience at the same time.”

To this end, Cyprus for Kids is more than just a map. Yes, one side is a gorgeous topographical representation of the island, dotted with fun activities and places to visit, eye-catching illustrations of treasure chests and flamingos, and interesting factoids. But the other is a cornucopia of information on the high points of each district, perfectly pitched for kids between the ages of four and 12.

“There’s just so much to explore on the island, and though we knew there were booklets and brochures aimed at the younger generation, there was no map specifically for children,” says Christiane. “At the same time, many of the parents themselves will be unfamiliar with maps – they’re probably in the region of 30 to 35 years of age, and may have grown up using satnav or GPS. But an actual map gives you so much more… No longer are you just going from point A to point B; with a topographical map you can see the bigger picture: the surrounding sites and attractions, the mountains and rivers, beaches and lakes, rather than just the roads. And that, I think, opens up new possibilities for spontaneity and discovery. And,” she adds, “kids love the colour and the illustrations. They like finding the symbols from the key. They enjoy being involved in the decision-making process. When you can see that the mountains are just 20 minutes from Limassol, it opens up new worlds…”

While this allows older kids to explore the island semi-autonomously, and suggest places they might want to visit, Christiane suggests that it’s also of value to younger children. “I imagine the parents and kids reading the map together, discussing their upcoming trip to Paphos, for example, and working out what there is en route that the kids themselves might find fun to do.”

Then, of course, there are the follow-up activities, and as a writer, ex-teacher and grandmother herself, Christiane is only too aware of the hands-on involvement and local titbits that fascinate the young. Intriguing factoids on Name Days, Wishing Trees, the Evil Eye, and Why Cypriot Kids Stay Up Later Than You all feature in the text, along with suggestions as to why the local sea turtles are so special, and how to make your own carob bar. Included in the scores of activities, we’ve got Segway Tours of Nicosia (so much more interesting for kids than just walking down Ledra!), Chocolate Workshops, a secret maze, and a mermaid cruise.

While Christiane wrote the text (aided by Mark Fields, who helped with the editing), and Marcos worked on the graphics, it’s Nicolas Rivero who hand-drew the whole thing. “He’s an incredible illustrator with a real feeling for what works for kids,” Christiane explains. “We sent him the text, asked him to be creative, and got back this wonderful, imaginative invention that will really appeal to children. Even the map scale is kid-appropriate,” she laughs. “You know how you’re on a journey, and the children keep saying ‘are we nearly there yet?’! Well, our scale is measured in time, not distance… so now the kids can work out for themselves how long the journey will take!

“With ‘Cyprus for Kids’ we’ve really tried to be of service to children,” she concludes. “We all remember what it was like to be a child on holiday in a foreign country, many of us have children and grandchildren ourselves. So we’ve accessed that, along with our local knowledge and a great deal of research, to create something that will make any trip to and round Cyprus as interesting and exciting as possible!”

In English, German or Russian, is available from the Mouflon Bookshop in Nicosia, as well as at many kiosks round the island, and on Amazon UK at the price of €4.95

Arrest in connection with series of car arson attacks