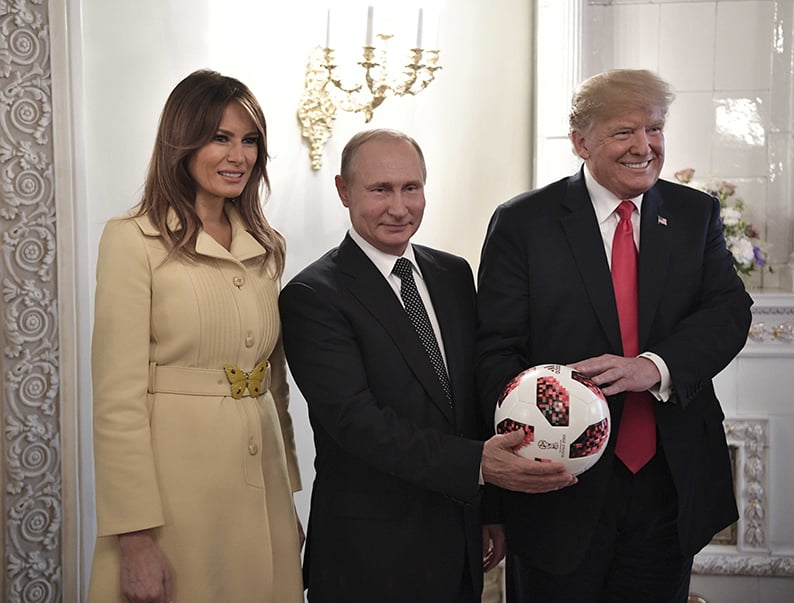 Russia's President Vladimir Putin (C), US President Donald Trump (R) and First lady Melania Trump pose for a picture with a football during a meeting in Helsinki

President Donald Trump on Tuesday morning cast his Monday meeting with Russian President Vladimir Putin in a glowing light and attempted to discredit the widely held perception that the day he spent with Putin in Helsinki, Finland, was detrimental to the United States.

“While I had a great meeting with Nato, raising vast amounts of money, I had an even better meeting with Vladimir Putin of Russia,” Trump wrote in a tweet. “Sadly, it is not being reported that way – the Fake News is going Crazy!”

Trump’s news conference alongside Putin, where he discounted US intelligence assessments that Russia meddled with the 2016 election, drew fire from members of both political parties, who said he put Russia above US interests.

Last week, Trump met with fellow Nato members, pushing them to increase their spending on defence. In another tweet on Tuesday, he took personal credit for the strength of the North Atlantic Treaty Organisation, saying it is better funded “only because of me.”

“I had a great meeting with Nato,” he said in the same tweet. “Nato was weak, but now it is strong again (bad for Russia). The media only says I was rude to leaders, never mentions the money!”