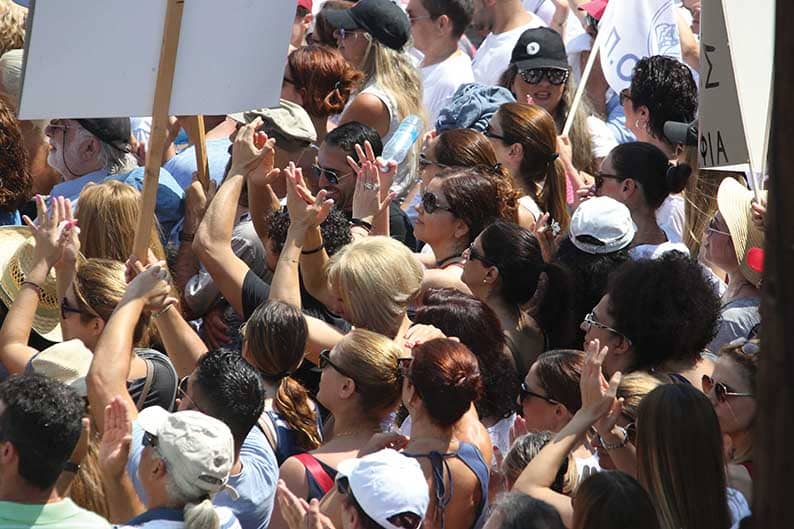 The government and Archbishop Chrysostomos on Wednesday called on teachers unions to cooperate after the latter threatened the school year would not begin smoothly following an inconclusive meeting they had with Education Minister, Costas Hambiaouris on Tuesday.

Teaching unions Poed, Oelmek, and Oltek, on the other hand, called on President Nicos Anastasiades and the political parties to take the initiative.

Government Spokesman, Prodromos Prodromou, called on the teaching unions to reconsider their stance and for dialogue to begin. The unions, which held a protest last week against the state’s streamlining plans said on Tuesday, after a meeting with Hambiaouris, that a new protest would be held, possibly towards the end of August, and that each would hold board meetings next week to evaluate their next steps.

They said that the education minister and the cabinet’s decisions were the core reasons the school year would not begin smoothly.

“The education minister implements a decision of the Cabinet. These decisions are not days-old. There was a similar decision a year ago… to move towards the streamlining of education,” Prodromou said. The government’s proposal, he said, was precisely aimed at making better use of teachers.

He said that the minister had invited them to a meeting next Tuesday. “A meeting will be held, a dialogue initiated, in a civilised manner, without shouting, without any name calling, without threats,” Prodromou said.

“The proposal for which all this fuss is about, is to reduce a much as possible the hours wasted not on teaching,” he added. The aim was the quality upgrading of education.

“From then on, we hope that the teaching organisations will reconsider their stance so that we can have dialogue,” he said, adding that even if they do not, “the government will simply have to apply what the Auditor-general himself is also saying that must be done.”

Union representatives reiterate however, that the impasse was due to the “intransigence” shown by Hambiaouris. Poed head, Fylios Fylaktou said all hope of reaching a solution vanished at the meeting, as none of their proposals was accepted.

He said the decision of the government for streamlining meant that people – working on contracts – would lose their jobs.

He also said that the way staffing was to be done would be to the detriment of children. “When September comes, people will see it too, especially parents,” he said.

He warned that things would not run smoothly come September “firstly due to the ministry and later on it will depend on what we decide.”

Archbishop Chrysostomos also called on the teachers to “rise to the occasion”, to leave aside egos and personal agendas and to cooperate with the minister for the benefit of the children.

He called on teachers to reconsider any strike measures, as a strike may be a powerful tool in their hands but they risk being scorned by the rest of society. “And then they (teachers) will not like it,” he said.

He added that he felt ashamed last week seeing so many teachers taking to the streets in protest over the decision to abolish exceptions from teaching hours as he had not realised that so many educators were “work-shy”.

In a bid to contribute to ending the tension between the government and teachers, the head of the Citizens’ Alliance, Yiorgos Lillikas, sent a letter to Anastasiades asking him to convene the party leaders’ council with the participation of Hambiaouris, the unions and organised parents. He also made a number of suggestions aiming at upgrading the educational system.

Relations between the two sides have been tense following the unilateral, they said, cabinet approval earlier in the month of proposals to streamline the use of teachers, including abolishing exemptions from teaching hours for trade union activity and extra-curricular activity.

Cabinet also approved the discontinuation of the standard practice of reducing of senior teachers’ teaching according to their years of service and from teachers’ time by 50 per cent due to their extra tasks.

Come and pick up some good vibrations