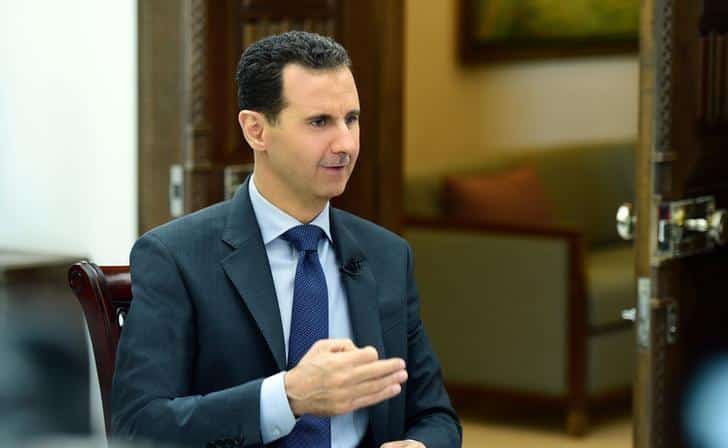 President Bashar al-Assad is set to recover control of the Syrian frontier with the Israeli-occupied Golan Heights in a major victory over rebels who have agreed to surrender terms, sources on both sides said on Thursday.

Backed by Russian air power and unopposed by Assad’s foreign adversaries, government forces have swept through southwestern Syria in the last month in one of the swiftest campaigns of the war, forcing surrender on massively outgunned rebels.

The campaign, which has already restored Assad’s control over a critical portion of the frontier with Jordan, marks another milestone in his efforts to recover control of the country fractured by more than seven years of conflict.

There was no government confirmation of the Quneitra agreement. State media cited “reports” a deal had been reached. It was not clear when implementation would begin.

A copy of the agreement sent to Reuters by a rebel source said insurgents had negotiated the deal with Russia.

Echoing surrender terms imposed on rebels elsewhere, opposition fighters agreed to give up heavy and medium-sized weapons. Those wishing to stay in the area will “settle” their status with the state, meaning accepting a return of its rule.

Those who reject the deal will be given safe passage out to the opposition-held province of Idlib in the northwest, according to terms that were also reported by a military news outlet run by Lebanon’s Hezbollah. The Iran-backed group Hezbollah is fighting in Syria in support of Assad.

Once the southwestern campaign is finished, Assad’s focus will likely turn to the two remaining areas outside his grasp.

These are the rebel-held northwest, where the presence of Turkish forces will complicate any military campaign, and swathes of the northeast and east that are held by Kurdish-led militias, supported by some 2,000 U.S. troops on the ground.

As Damascus and its allies pursue military victory, there appears little chance of the kind of negotiated peace which Assad’s adversaries say is needed to stabilise the country and encourage millions of refugees to return.

The war is estimated to have killed hundreds of thousands of people, displacing 11 million and forcing some six million abroad as refugees.

A Reuters witness on the Israeli side of the Golan frontier said fighting continued in the area of Tel al-Haara, a strategically vital hilltop seized by government forces this week. The sound of planes could be heard as shelling continued.

The campaign near the Golan frontier has been particularly sensitive because of Israeli concerns. Israel has signalled it has no problem with Assad recovering the area as long his Iranian and Iran-backed allies were kept away from the frontier.

Israel has also said it would demand strict adherence to the 1974 disengagement deal with the Syrian army on the Golan, threatening a “harsh response” to any attempt by Syrian forces to deploy in that zone. The deal, concluded after the 1973 Middle East war, created a buffer zone patrolled by the U.N. Disengagement and Observer Force.

The report by the Hezbollah-run military news outlet said the surrender agreement stipulated “the return of the Syrian army, represented in the 90th and the 61st brigades, to the positions that it was in before 2011”.

Details of the deal sent by the rebel source included a provision that Russian military police would accompany the same two Syrian army brigades “to the ceasefire line and the demilitarized zone, according to the 1974 agreement”.

The provisions did not elaborate on any implications of the deployment of military units on the 1974 agreement.

Israeli Prime Minister Benjamin Netanyahu, during a visit to Russia to meet Russian President Vladimir Putin this month, indicated his country did not object to Assad’s return to the Golan as long as Iranian force and Hezbollah stayed away.

In a briefing with Israeli reporters, he said Israel had not had a problem “with the Assad regime for 40 years”, noting that “not one bullet was fired on the Golan Heights” in that time.

Israeli media accounts of the meeting with Putin also quoted him as saying that the Russians had succeeded getting Iranian and Hezbollah forces to move dozens of kilometres (miles) away from the Golan frontier.

U.S. President Donald Trump said at a news conference with Russian President Vladimir Putin on Monday in Helsinki that both had agreed to work together to help ensure Israel’s security.

Putin, Assad’s most powerful ally, cited the need to restore the situation along the Golan borders to the state that prevailed before the outbreak of the Syrian crisis in 2011.