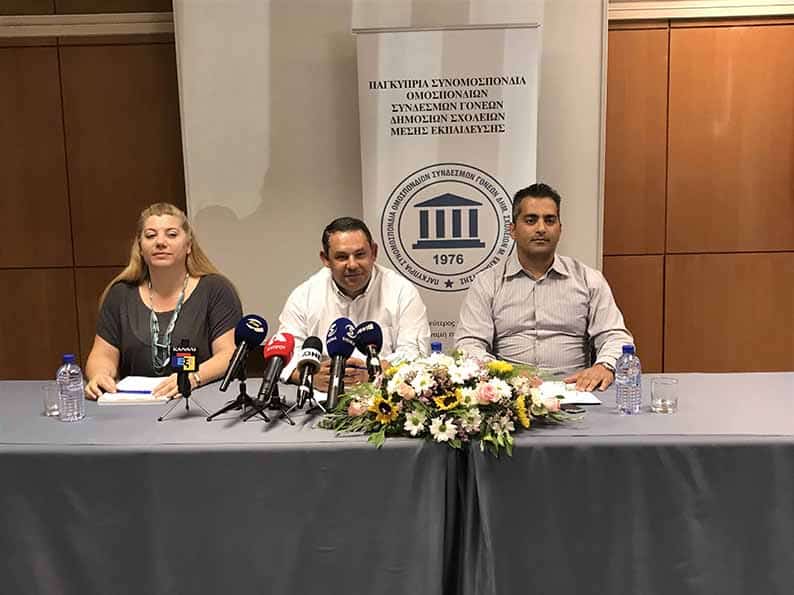 Organised parents on Thursday asked secondary education teachers union Oelmek to apologise for calling them ‘errand boys and girls’ for the education minister and to attend the meeting called by the latter for next week.

In a harsh tone, the head of the confederation of secondary education schools’ parents’ associations, Kyriacos Nikiforou, returned fire following accusations by the deputy head of Oelmek, Pantelis Nicolaides, earlier in the week that organised parents were ‘errand boys and girls’ for the education minister for not taking sides in the recent dispute between teachers and the government on the new measures that abolish exemptions from teaching for extra-curricular activities.

“Those who are safely ensconced and are working as stooges for party mechanisms are not entitled to devalue the role and work of organised parents,” Nikiforou said during a news  conference.

He said that these people ought to put their own house in order instead of pointing the finger at parents. “We have never been ‘errand boys and girls’ for anyone, neither ministers, nor government nor parties,” he said.

Nikiforou said that they were saddened and concerned to witness the ongoing dispute between the two sides as regards the government decision for the streamlining of state schools.

He also called on teaching unions to attend the meeting called by the education minister for next Tuesday to launch a dialogue on their disagreements as regards the streamlining.

Organised parents have made attempts to help resolve this dispute, he said, but despite the fact they succeeded in putting all disputed measures on the table, it had not been possible for a dialogue to be launched.

He said organised parents would like to see both financial and educational streamlining in state schools.

“We demand to be present at the dialogue on the streamlining as one of the three pillars of education,” Nikiforou said.

He also said that as teaching unions participate in committees dealing with educational matters, their announcement that they would take measures and abstain from these committees, created serious problems and by extension, it would affect negatively the new school year.

Nikiforou also said that any measures teaching unions and the ministry were thinking of taking, “must end immediately, and definitely, before September 1”.

The unions, which held a protest last week against the state’s streamlining plans said on Tuesday, after a meeting with Education Minister, Costas Hambiaouris, that a new protest would be held, possibly towards the end of August, and that each would hold board meetings next week to evaluate their next steps.

Our View: Government must not give in to teachers’ union bullies